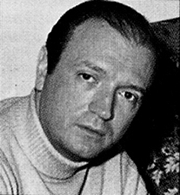 Gianni Ferrio, was born in Vicenza, Veneto, Italy on the 15th of November 1924. He originally intended to become a doctor and began to study medicine during the 1950,s completing his studies at the University of Padua. However the composer soon realized that it was music that he was destined to be involved with and not medicine. He studied violin with Mariano Frigo and also expanded his musical studies to harmony, composition and musical direction under the tutelage of Amerigo Girotto and Arrigo Pedrollo.

In 1953 the composer began an intensive period of recording activity with the CGD IN Milan. He worked with many artists during this period of his career these included Teddy Reno, Jula de Palma and Johnny Dorelli. In 1959, Ferrio scored his first motion picture, which was a war/comedy, GUARDATELE MA NON TOCCATELE, the movie starred Ugo Tognazzi and Johnny Dorelli and was directed by Mario Mattoli. This was followed by TIPI DA SPIAGGIA in the same year, which was also directed by Mattoli and had Tognazzi in the leading role. In 1960, Ferrio scored his first western movie entitled UN DOLLARO DI FIFA the movie was another comedy and was directed by Giorgio Simonelli and yet another vehicle for actor Ugo Tognazzi, although produced in Italy this was not what is now referred to as a spaghetti western as it was released before the Italian western genre as we know it had been created. The 1960,s was a busy and fruitful period for Ferrio, he wrote the music for numerous motion pictures during this period and began to create his own unique sound as a composer starting to put his own distinctive musical stamp upon numerous examples of films which encompassed many genres. Like so many Italian composers who worked in film during this period Ferrio scored many westerns at this time and although he was a composer that was involved heavily with this particular genre he never really conformed to the utilization of the “ITALIAN WESTERN SOUND“.
In fact it is probably true to say that Ferrio created his own unique sound for the westerns he worked upon, on many occasions infusing a style that was somewhat jazz orientated. Unlike many of the other Italian composers that were active at this time, Ferrio very rarely collaborated with any other writer on his scores, in fact the one thing that linked Ferrio to others involved in the western genre was the choir IL CANTORI MODERNI, as Ferrio often used these and their director Alessandroni on his soundtracks. He did collaborate with Ennio Morricone on FORT YUMA GOLD, but this was we are told not a collaboration in the true sense of the word, meaning that each composer contributed compositions to the movie, with Ferrio’s contribution being the greater.

The composer scored many key examples within the Italian western genre, these included, SENTENCE OF DEATH, DESPERADO, PER POCHI DOLLARI ANCORA, JOE CERCATI UN POSTO PER MORIRE, EL DJURADO,AMICO STAMMI LONTANO ALMENO UN PALMO, MI CHIAMAVANO REQUIESCAT and one of the last Italian westerns produced CALIFORNIA. Ferrio,s style is instantly recognisable, and the composer makes excellent use of the percussive elements of the orchestra, he invariably combines percussion and woodwind to achieve a sometimes dramatic and highly original sound. As well as writing for the cinema the composer has also written numerous scores for television and has worked prolifically as a song writer, composer and musical director for artistes such as, Astor Piazzolla, Toots Thieleman, Luis Bonfà, James Taylor, Jerry Lewis, Mina ,Caterina Valente, Ellis Regina, Ornella Vanoni, Milva and Gigi Proietti. His music has enhanced and supported approximately 120 movies and many television projects, he has worked with numerous directors, including: Ermanno Olmi,Luigi Zampa, Miklós Jancsó, Giorgio Capitani, Steno, Duccio Tessari, SergioCorbucci and Marco Ferreri. In his latter career Ferrio remained active and conducted the Roma Sinfonietta Orchestra in a number of concerts. Ferrio is in every sense chameleon like when it comes to scoring motion pictures as he seems to be happy writing for, Westerns, Giallo,s, Comedies, Sex and psychedelic capers, Romantic tales and also horror and adventure stories. He is an original and also an accomplished composer but considering his immense output it is surprising that he is still virtually unknown outside of Italy and the European continent, unless of course you happen to be talking to a fan of Italian film music. The Maestro passed away on Ocober 21st 2013. He will be missed greatly….