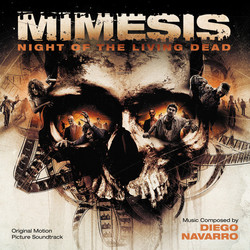 Various comments and observations have been made over the years about how violence on screen or in games played on a computer or TV etc, can effect everyday ordinary people and turn them into not so ordinary and violent individuals. It has been said many times that violence on screen can maybe plant the seed of violent or evil ideas into the minds of certain susceptible people that watch aggressive and bloody video games and also horror movies. MIMESIS is a movie that will certainly make one sit up and think about this theory. A group of horror fans find themselves unwilling participants in a terrifying role playing game that pays homage to a classic horror film and if you like many others think that violent films, television shows and computer games could be responsible for the corruption of impressionable minds and individuals, then MIMESIS-NIGHT OF THE LIVING DEAD will I am sure be of interest to you or indeed might evoke your worst fears and darkest dreams. The musical score for MIMESIS is the work of Spanish born composer Diego Navarro, who in my opinion has penned an imaginative and also a highly original soundtrack. The composer utilizes and explores a number of musical avenues within the score and has provided the movie with a musical background that is as harrowing, thought provoking and also as fearsome and gruesome as the movie itself. Navarro combines symphonic sounds with voices which are either in the form of choir or solo performances. He also incorporates a whispering voice in a few of the cues which to be honest is quite disconcerting and un-nerving at times as it does literally make the hairs on the back of your neck stand up. This is as I have already said an imaginative work, it is not just a film score or the musical soundtrack to the movie, it is an integral part of the movie and becomes part of the action and another component of the storyline that is unfolding on screen. The score also contains a number of less harrowing compositions and the composer does provide us with a calming respite on a few occasions these manifest themselves in the form of a soothing and emotive violin solo which is either introduced or accompanied by solo piano. These poignant moments are however few and far between, the CD opens with MAIN TITLE, the composition commences with a female whispering voice supported by eerie sounding string effects and also a soprano voice is introduced and this ushers in a more strident performance from the string section that establishes a strong and powerful musical theme, the strings are embellished by percussion and also supported by the use of choir which creates an unsettling ambience and a near harrowing mood to the proceedings, the string section carry the central theme like a macabre sounding waltz of sorts, but this fades away and then we are re-introduced to the eerie sounding whispers and the soprano performance which on this occasion is performed unaccompanied musically bringing the main title to a close.

Track number two THE FARM, Is an equally atmospheric composition, again voice is utilized, and the composer underlines the serenity and beauty of the pure sounding soprano with an echoing percussive sound, the voice fades into the darkness as it were and the cue continues with a spidery sounding motif of sorts that is performed on sinewy sounding strings that are themselves accompanied and punctuated by percussive elements with punctuation from subtly placed harp, piano and a faint music box effect. The cue moves into a more forthright sounding piece at around the 4 minute mark, with strings beginning to stir proceedings up a little and the composer adding to this thunderous percussion and atmospheric crashes that build to what is a crescendo of sorts and concludes the composition. I think track number three, THE OPENING TITLES, is for me one of the scores stand out cues and certainly manages to set the scene and establish the mood in a very short time period. The composer brings together the half heard whispering wordless voice which is catapulted along on a wave of fervent sounding strings which are embellished further by the use of choir and punctuated by percussion, this is a vigorous and effective piece that says it all in just over one minute. Track four, PARTY AT NIGHT, Starts out with a pleasant sounding piano solo, under lined by faint use of strings and harp, but the pleasantries are short lived as percussion once again raises its dauntingly foreboding sounding head, piano returns with strings and lightly plucked bass’s that act as an uneasy sounding punctuation, these are overwhelmed by more dark and sinister sounding atmospherics as the cue draws to its close. Track number five, ZOMBIE ATTACK-THE ZOMBIE DANCE, is a wonderfully harrowing piece, I would describe it as a kind of macabre waltz that builds fairly swiftly with strings, percussion and brass adding layer upon layer of tension until solo voice again seems to intervene from out of nowhere restoring what is an uneasy sounding calmness. MIMESIS is an intelligent and at times quite complex sounding work, it is a score that oozes originality and although this is for a horror movie the composer maintains an air of melodic presence throughout. This is a score that I would recommend highly.