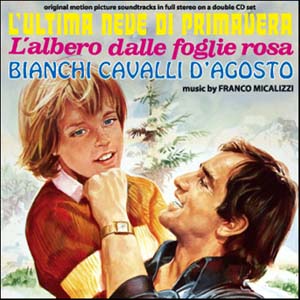 Three Franco Micalizzi soundtracks on 2 compacts discs, this is a real stunning collection of the Maestro’s finest work for cinema. Three romantically laced scores which all compliment each other perfectly and make for a wonderful listening experience for any fan of the composer or any Italian film music enthusiast. All are from the 1970s which was a particularly fruitful period for Micalizzi, during this period he created some of Italian cinemas most memorable soundtracks and was involved with numerous popular movies of all genres. Micalizzi established himself quickly as composer who was consistently good at delivering a top notch score no matter what type of film it was. The first score featured on this Digit movies release is THE LAST SNOWS OF SPRING which was released into cinemas in 1973, this was a popular movie throughout Europe and the soundtrack sold well in Italy as well as outside of that countries borders. This tearjerker of a film was even advertised on UK television as was the soundtrack album that got a limited UK release on K-Tel records. Ok nowadays it would probably be relegated to late night cable television if it was indeed shown at all as time has not been kind to it and now it is looked upon as a sentimental and syrupy example of 1970s cinema. With a fresh faced child actor Renato Cestie taking the part of a boy who’s Mother has died and refuses to accept his Fathers new partner. The score however has managed to stand the test of time and even now sounds as bright and melodic as it did way back when I first heard it on the RCA Original Cast LP which I purchased from Michael Jones in London. Micalizzi,s gift for melody is evident in the first flourishes of the films love theme. The CD release includes the 13 original album tracks, plus we are treated to a further 10 cues which were not before issued in any format until now, Micalizzi, manages to create an atmospheric as well as heartrending sound throughout the score, via use of the string section, harpsichord, guitar, piano and also subtly placed woods which not only support but enhance the many swelling string flourishes that send a shiver up ones spine as they rise and fall throughout the work. There is also a song on the soundtrack, CRIANCA, performed by Trio de Paula and Gino Marinuzzi which I would compare to the style of Antonino Carlos Jobim, as it has a definite Brazilian sound about it.

Micalizzi also utilises a jazz sounding organ which can be heard at its most effective during track number 12-VODKA PER DUE, when it is showcased alongside harpsichord and percussion. This is a score that one will never tire of and I am sure will be returned to on many occasions. Next up is The lesser known, THE TREE WITH THE PINK LEAVES, a film in many ways similar to THE LAST SNOWS OF SPRING, a tearjerker involving a young male child (Renato Cestie) and his sadness about the break up of his parents, a sadness that eventually drives him to run away but tragedy strikes and he is involved in an accident and sadly dies for this movie Micalizzi again created a suitably emotive score, in which he utilises solo guitar that is supported heavily by strings and woodwind. There are certainly similarities between the two score, I suppose there would be as they were both written by the same composer almost back to back, THE TREE WITH PINK LEAVES was released in 1974. The highlight cue for me from this soundtrack is track number 26 on disc 1, FAVOLA which is a combination of strings, harpsichord and soothing sounding woodwinds that are punctuated by piano and guitar; it is a sheer delight and one of Micalizzi’s most haunting pieces. Originally released on Cinevox records, the LP has now become sought after by collectors, not just for the music it contains but also for its vibrant and eye arresting art work some of which is reproduced for this CD release. The soundtrack is spread over two discs and runs from track number 24 to 28 on disc one and then continues tracks 1 through to 5 on disc two, a score that contains light jazz orientated cues with sleepy sounding trumpet being lifted by sentimental strings, romantically infused pieces and some cues that mange to be mysterious yet highly harmonious. Again a wonderful score, which will be firm favourite of collectors old and new. The third score on this collection, has never been issued in its complete form before, a few tracks appeared back in 1976 on a Franco Micalizzi best of collection, that was released on RCA in Italy and also a 45rpm single did get a release, THE WHITE HORSES OF SUMMER again is a tearjerker, and involves yet another sad tale about a young boy, who when holidaying in Italy falls from a cliff and badly injures himself, but through this accident brings together his parents. This score by Micalizzi, is quite stunning, full of melody, and also features the stunning soaring wordless vocals of Edda Dell Orso, this release features no less than 19 tracks which are pure unadulterated romantically Micalizzi. Delicate piano solos, soaring strings, beautiful female voice, charming themes and a delightful song all go to make up a rewarding and enriching listening experience, I recommend this one of Digitmovies latest releases whole heartedly I just hope that more Franco Micalizzi soundtracks will be made available on compact disc, as he is certainly one of those unsung heroes of film music. Packaged very well by Digitmovies with notes by Claudio Fuiano, and clear and very crisp sound. This is certainly one for the collection.