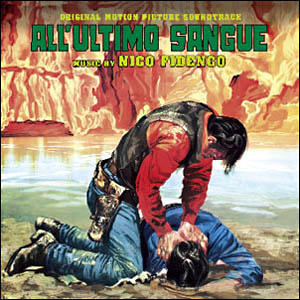 ALL’ULTIMO SANGUE, is for me another classic example of Nico Fidenco’s, flair and originality when it comes to scoring Italian westerns, and I rank this up there with the likes of JOHN IL BASTARDO and RINGO THE TEXICAN also penned by Fidenco, and other examples such as A MAN A HORSE AND A GUN by Cipriani and ARIZONA COLT by De Masi. Released in 1968 in Italy but not given a theatrical release 1971 outside of its country of origin, this is an interesting example of the spaghetti western genre. Directed by Paolo Moffa under the alias of John Byrd, the filmmaker cleverly utilized many of the original sets that were used in Leone’s FOR A FEW DOLLARS MORE. Actor Craig Hill portrays Clive Norton a bounty killer who is employed to track down a desperate outlaw Johnny Gunn played by Giovanni Cianfriglia, and his gang who are responsible for robbing an army payroll. Norton saves Gunn’s brother from the hangman’s noose in exchange for his help in finding the outlaws, the pair also enlist the aid of a Mexican bandito played by Francesco Santoveti, but he eventually betrays them and joins forces with Gunn. The final shootout although impressive is somewhat predictable, as is the films plot. The most memorable performance within in the movie has to come from Giovanni Cianfriglia, who interestingly enough started his acting career as a stunt double for the mighty Steve Reeves. Fidenco’s score is probably one of the more interesting in his impressive canon.
As always Fidenco seems to have been able to produce a score that not only matches the action on screen, but also remains interesting and entertaining away from the images it was intended to enhance and support. The compact disc includes an remarkable number of cues, 38 in all, and it is split into three sections, firstly we have 9 cues that are taken from the original mono album tapes, these are followed by a further 6 cues that are alternate takes in mono and then finally 21 cues taken from the original score in full stereo. This is a great compact disc to just put on and listen to on repeat, there are so many themes and interesting tracks included here that no one could ever become bored listening to it. CHALECO, CHALECO MARCETTA, CHALECO GALLOPATA and CHALECO TRISTE, probably being the stand out cues, but saying this the orchestration the performance and the sound achieved here by Fidenco is outstanding. It is a text book spaghetti score, solo trumpet, racing snare drums, choir, electric guitar, suspense filled cues and quirky little trills, squeaks and musical sounds all combine to make this a worthwhile purchase and an enjoyable listening experience. If you are a connoisseur of Italian western music then what are you waiting for order it now, again this is a limited edition, and we all know these do not hang around for long, illustrated wonderfully with stills from the movie, the original theatrical publicity poster and the original CAM LP cover. Sound quality is outstanding, another formidable release from Hillside.