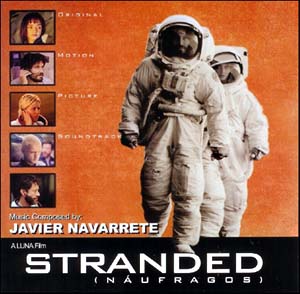 This is a composer who I stumbled upon via a friend who liked his music. Since  I purchased PANS LABYRINTH I have always looked out for new works by him, even to the extent of pestering a poor record store owner in Menorca Spain when on holiday. The composer seems to be enjoying something of a spurt in his scoring assignment schedule of late, which is good for us. STRANDED (2001), tells the story of an ill fated mission to mars, a group of astronauts crash on the red planet and try to survive, the music provided by Navarette reflects the loneliness and desperate plight of the astronauts in their struggle to survive, relaying an atmosphere of solitude and vastness to the listener. The score is a rather low key and down beat work, something quite different from the composers work for PANS LABYRINTH and the recent MIRRORS and INKHEART. None the less it is a well constructed and ingeniously orchestrated score which relies mainly on low strings and almost mournful sounding motifs and phrases. It is actually a score that becomes compelling because of this style and sound, there are no grand or exuberant crescendos, just steady meticulously composed cues, which although in the main are sombre can be beautiful and attractive, the composer utilizes the string section much within the work, but occasionally enhances and supports with the use of brass. I am of the opinion that Navarette is one of the most gifted film music composers of the 21st century thus far, and I can hear many similarities between his work and the music of the great Georges Delerue. There is a sound and style to this Maestro’s work that is haunting and infectious, whether it be a lilting lullaby, a dramatic and crashing excerpt or a low key and serious sounding piece, his music has an attraction to it that I have not encountered for a while in film scores. Track 2 on STRANDED, UNA TUMBA EN MARTA, is one such example, low strings introduce the track, these are joined by subtle use of horns, that embellish the string section and then the horn takes on the central role being supported by strings, in many ways this composition put me in mind of some of John Barry’s work, faraway sounding horn and low, dark sounding strings underlining the proceedings creating a real sense of isolation and hopelessness. The score is one that may not appeal to all, but I would urge you to check it out, I am confident you will find it an interesting and also a rewarding listening experience.