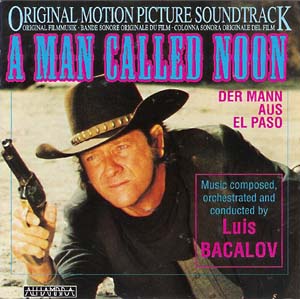 Is it a Spaghetti western? Is it an American western? Or maybe it’s a British western, (yes the British have made westerns). When you look at the directorial and producer credits for this movie it looks like it’s the latter to be honest. A MAN CALLED NOON was released during the summer of 1972, and although the movie did not enjoy much success at the cinema box office, it is nevertheless an entertaining and at times thought provoking sagebrush saga. Directed by British filmmaker Peter Collinson who’s other film credits include THE SPIRAL STAIRCASE and the taught quite harrowing physiological thriller FRIGHT and produced by the larger than life Euan Lloyd, who was connected with films such as THE WILD GEESE, THE SEA WOLVES, PAPER TIGER and the over the top western CATLOW. So A MAN CALLED NOON was something of a departure for these two movie makers. The film boasts an impressive cast line up, which includes Richard Crenna, Stephen Boyd, Farley Granger and the beautiful Rossana Shiaffino. The films storyline is somewhat more involved than your normal run of the mill western, it has an intriguing plot which is based upon the writings of author Louis L’Amour. Filmed in Spain and meticulously photographed by John Cabera. A MAN CALLED NOON is an entertaining movie that is more of a thriller than a shoot em up, although saying that there is a considerable head count of deaths notched up when it comes to the gunfight sequences. The musical score is courtesy of Luis Enrique Baclov, the style which he employed on this movie is I suppose is slightly different from his earlier efforts within the western genre, ie; DJANGO, QUIEN SABE and THE PRICE OF POWER and I think it is possibly A MAN CALLED NOON that was Baclov’s stepping stone to the current sound and style that we expect from this Maestro. The score is a work of numerous styles, which include an almost sweet sounding melody  that the composer utilises as the heart of his soundtrack building the remainder of his strong thematic material around it and from it, this is performed by strings which at times are enhanced by the wonderfully unique and wordless   soaring  vocalising of Edda Dell Orso.  Baclov employs a  a style and creates a sound that  is not a million miles away from Morricone’s ONCE UPON A TIME IN THE WEST and also is a style he revisited in his own score for THE GRAND DUEL. Then we have the darker more sinister side to the score which manifests itself in cues such as ‘Fire and guns’ and ‘In the fortress’, again there is a gentle nod in the direction of Morricone when the composer employs this type of scoring. The sounds are far from melodic and at times just vaguely musical, but match the action perfectly creating the desired urgent atmosphere that is required for the scenes. We also have an almost comic sounding style which raises its head within cues such as RIMES a theme for Stephen Boyd,s character, where the composer incorporates a ticking clock effect alongside a banjo and harmonica that combine to create a jaunty theme which ambles along at a steady but somewhat awkward sounding pace. Then there is a fourth style to this work, which is completely removed from the previous three, this is utilised in tracks such as ‘Following The Horse’ and ‘Highlands’, Baclov evoking a South American flavour and sound with the use of Pan Pipes and guitar, in fact if one were to listen to track number three, ‘Highlands’ without knowing what movie it was from, I am sure you would probably ask “is this from CHE”? This is sadly a movie that has been more or less forgotten, overshadowed by other examples of the genre that were released during the same period, a film which is hard to obtain on video or dvd, and only very rarely shown on cable television. The score too I feel is sadly overlooked and again forgotten by collectors, you would think that with all the re-issues of Italian film music recently, someone would have looked at A MAN CALLED NOON and thought, now there’s a good soundtrack, lets release an expanded version, but I suppose this version and the subsequent re-issue which has the same tracks will have to do for now. I recommend this score wholeheartedly, and also suggest you try and take a look at the movie.

I remember well the TV series of DARK SHADOWS, and Bob Colbert’s eerie sounding scores and haunting theme for the show. Now the big screen version emerges and in the hands of Tim Burton I am confident that it will be even darker and more alluring than the original small screen adaptations. The television show gained a cult status and still has a following of many, which seems to grow by the day. This movie version will, I am sure, also attain notoriety and be popular among both old and new fans of the mysterious central character BARNABAS. Composer Danny Elfman has enjoyed a long and fruitful partnership with director Burton. Elfman’s scores being an integral and important component within Burton’s dark, off beat and often delightfully warped projects, which also at times have tinges of comedy, poignancy, melancholy and emotion. Burton’s inimitable style of film making required scores that were diverse and highly original. Elfman was certainly the individual to achieve this and he has written some fine soundtracks that not only enhance and support the storylines and escort the characters within these movies, underlining every move they make or highlighting their mannerisms and quirky behaviour, but remain entertaining as just stand alone music cues to be savoured and digested away from the movies they were intended to accompany. When it was announced that Burton would make DARK SHADOWS, it was no surprise to see Elfman’s name as composer included in the credits. In fact, many took it as something of the norm to have the composer on board even before it was officially announced – a Tim Burton movie without Elfman would be unthinkable. The buzz surrounding the music was; what type of score would Elfman etch upon the picture? What delights of impish mayhem and mischievous musicality would we be treated to and what imposing and luxurious grand theme would we hear when the project was finally finished? Well the time for waiting, cogitating and anticipating what would be is over. Released on Sony Classical records we have Elfman’s powerful and beautiful score.
In a nutshell, this is probably the most superior soundtrack of Elfman’s to date. He has written a melodic and potent work which is commanding and highly thematic. The composer combines large orchestral textures and colours, enhanced by choir and bolstered by a scattering of electronic elements to conjure up a score which delights and enthrals the listener. Right from the beginning, the composer has you hooked, his opening cue on the CD is the “Prologue”, which is in effect an overture and a combination of a number of themes both melodic and atonal, heard throughout the score. “Prologue (uncut)” begins in a mysterious, misty and shrouded fashion. Woods are utilized to create a sound and atmosphere of apprehension with a melodious and slightly steamy element, evoking the style of John Barry; being moody but tuneful. Elfman then brings low strings into the equation which are themselves underlined by subtle and fleeting use of choir. Woods then return as the composition progresses and grows, becoming a more sustained and grand affair. Organ is introduced alongside strings and horns to create a form of crescendo which is short lived as the composition moves into a lush sounding piece with strings, brass, percussion and choir. This curtails and makes way for a more subdued style of writing, until it finally builds and bursts into a full blown grand theme which is a combination of modern film scoring fused with a sound and technique which could be out of any one of the vintage Universal horrors and brought together by highly expressive and grandiose sounding flourishes from both strings and brass sections. Listening to the score over and over, one can pick out little nuances of past Elfman scores but there is also a grander additional powerful technique present, akin to the works of Kilar. Driving strings with flyaway sounding horns underlined by wistful woodwind and forceful percussive elements all combine to create and purvey a powerhouse of composition, in which the now familiar Elfman sound prevails and shines through.

Track two “Resurrection”, is at first quite a sinewy sounding cue, but this soon segues into something more substantial and driving. Searing and sliding strings whip up the proceedings into a frenzied mid track climax, which halts to the sound of a ominous blast from brass. Low strings are again brought into play and underline the use of choir and woodwinds whilst the composition is bolstered and punctuated by the use of synthesised sounds, effectively adding depth and energy to the piece. Track three “Shadows-Reprise”, is a frenzied and urgent sounding cue. It is a working of the score’s central theme performed again by booming brass, forceful strings, backed up with the utilization of synthetic elements – a short lived cue but none the less one that is commanding and exhilarating. This is one of the better scores to be released thus far in 2012 being a soundtrack which has an imposing and powerful presence. There is another CD which will be released on Warner Music. This is mainly a song compilation from the soundtrack and includes tracks from The Moody Blues, Alice Cooper, Donovan, T. Rex and Barry White, with a vocal also included from Johnny Depp entitled “The Joker”. This album also includes two cues of the original score but all of the songs apart from the Depp vocal are vintage pop and rock, so nothing new there.