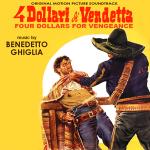 Hillside are at it again, spaghetti westerns coming in three’s, this is in my opinion the weakest of the trio, but saying this it still gets a 4 out of five star rating, Benedetto Ghiglia was a much in demand composer during the 1960’s and his heavy and echoing percussive sound became one of the musical trademarks that we now so readily associate with the genre of the Italian western, QUATTRO DOLLARI A VENDETTA is slightly different from his other western works, as it contains whistling and also a theme song of sorts in the form of the track LET HIM GO, which is the scores opening track performed by Nora Orlandi’s coro 4 +4. This track was originally issued as a single on CAM then was part of the musical collection included on the CAM compilation LP THE WEST 1, so this release is certainly long overdue. The score is a good mixture of styles, dramatic, Mexican sounding passages plus all the Spaghetti sounds we know and love. The central theme LET HIM GO is also utilised throughout the work in various guises and arrangements and makes an appearance no less than eight times within the compact discs running, but even though it appears so many times this does not detract from the compositions quality and overall appeal. The composer does in fact make reference to one of his other Spaghetti western scores within this one as in the cue FUORILEGGE we can hear more than a fleeting slow tempi rendition of the composers theme for ADIOS GRINGO. This is another one of those lost gems from the genre of the Italian western, and its hats off to Hillside for finding it, restoring it and making it available. I was told that there is a little distortion on the opening cue, but I compared it with the LP track I have and the sound is the same, CAM recordings at times were distorted, it was something that seemed to do at times, why I am not sure. Other than this the sound on the CD is clear and quite striking for a soundtrack of this age (1966). I would urge any fan of the genre and its music to purchase this straight away, for one its good and also it’s a very limited edition, just 500. The art work is wonderful, a sure fire winner. Highly recommended.