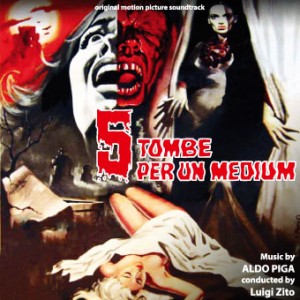 Released in 1966 5 TOMBE PER UN MEDIUM (TERROR CREATURES FROM THE GRAVE), starred the high Queen of horror Barbara Steele who we all know was prolific in her roles within Italian produced horror movies of the 1960,s. The movie was directed by Massimo Pupillo who also worked on a handful of horror movies during the 1960,s most notably, IL BOIA SCARLATTO and LA VENDETTA DI LADY MORGAN. The film also included Mirella Maravadi, Walter Brandt and one of Italy’s ever present actors in horror movies Luciano Pigozzi within its cast list. The musical score is the work of composer Aldo Piga, the composer was born in 1928 and began scoring motion pictures in 1959 when he wrote the score for DUE SELVAGGI A CORTE, he worked on numerous movies of the horror variety and his composing skills and unique style lent itself to this particular genre of films wonderfully, his atmospheric and tense music creating an even greater air of tension and mystery within the films he was involved. His style was really a fusion of old style horror film scoring as demonstrated in Universal horrors such as THE WOLFMAN, DRACULA and FRANKENSTEIN with big musical statements announcing the arrival of monsters etc and also at times almost continuous musical wallpaper as it was referred to, and also the more modern Italian approach which relied upon harpsichord, woodwind trills, and brooding string passages. One only has to listen to the opening of 5 TOMBE PER UN MEDIUM, to hear what I am saying, it begins with a great fanfare of sorts which is akin to the style of Clifton Parkers NIGHT OF THE DEMON, and a perplexing but at the same time mildly musical theme ensues, with strings being supported by timpani and further enhanced by jagged sounding brass flourishes, and wistful but threatening woodwind. To be honest this would not be out of place in any Hammer horror as an opening theme. This style of scoring the composer employed alongside a more downbeat style and together the two styles or sounds ended up giving us a favourable sound that matched perfectly the macabre and mystic goings on that often occurred in Italian productions. For me the Italian horror movie genre seemed to have a rather down beat persona in the 1960,s and I do not mean this in a derogatory way, in fact the films were very cleverly filmed and relied upon stares and spooky locations to relay the horror or tension, they also for me were a lot slower in pace than say the Hammer horrors, but because they were laid back as it were the moment of horror or the actual scary stuff became more real and more impacting upon the audience who had been lulled into a false sense of security.

The music for 5 TOMBE PER UN MEDIUM, never received a soundtrack release at the time of the film being in cinemas, and this is hardly surprising because Horror movie soundtracks very rarely did at that moment in time. Thankfully, Digit movies have rectified this and for the first time this wonderfully atmospheric score is available to savour. What is surprising is the sound quality of this recording, the tapes have obviously been lying in the CAM vaults for the past 50 years, so it is hats off to Digit movies for the wonderful work they have done restoring these. The score includes a vocal which is performed at first in Italian and then The soundtrack is partnered on this disc by another horror score by Aldo Piga, IL MOSTRO DELL’OPERA, (VAMPIRE OF THE OPERA) this is a film that was released back in 1964, and again was originally a CAM recording, in my opinion this score is not as striking or entertaining as the previous work, but saying this it still has a certain attraction and contains a number of interesting and original moments, the composer utilizing Theremin on a number of occasions throughout the score to infuse a sound that is unworldly and chilling. The movie which borrowed heavily from the story of PHANTOM OF THE OPERA, starred Giuseppe Addobbati and Marco Mariani with Gaby Blanc and Carla Cavalli and was directed by, Renato Polselli. The remainder of the score is a mixture of tense and icy sounding cues which evoke a feeling and atmosphere of fear and apprehension and also a scattering of dance tunes from a bygone age and the odd plaintive sounding emotive interlude. Overall this is a fairly good listen and the composer delivered two scores that we can say are in the main enjoyable, with moments that are inventive and also mildly original considering the period in which they were written. Presented well by Digit movies with colourful cover art work and numerous black and white stills from both movies.