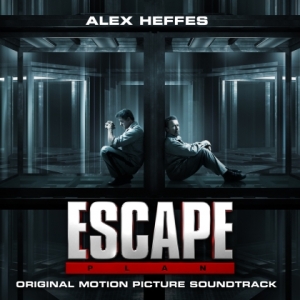 Composer Alex Heffes is in my opinion one of the most talented and versatile composers working in film and television at the moment, he has worked on a staggering amount of television productions and even if you did not know it you have probably heard and enjoyed some of his music via the small screen and also now more regularly on the big screen. One of his latest assignments is a big box office movie ESCAPE PLAN which stars Sly Stallone and Arnie Schwarzenegger, so when I say BIG I am not joking. The composer has penned a soundtrack that is not only powerful and high octane in its style and sound but also one that has numerous musical elements and atmospheres which have been created by Heffes to match this non stop action movie that also has something of a ingenious storyline. The music I thought was kind of old school film music, by this I mean that the score not only contains some fantastic edge of the seat action material but it also has some real thematic material present. I also thought that Heffes merged the various styles within the score together seamlessly and has produced a work that not only underlines and supports the action but becomes part of it and drives it along at break-neck speed making it even more entertaining and urgent. The score has a dark and brooding foundation to it, on which the composer has built a pulsing and vibrant score that gains momentum and radiates tension throughout. When I say this reminded me of old school film music I could not help but think of composers such as Jerry Goldsmith at certain points within the score, it has that sound to it, upbeat but also quite grand and dramatic. The CD opens with BENDWATER HIGH SECURITY PRISON, this is a tense piece in which Heffes fuses both symphonic with electronic, the later taking a more dominant role in this particular scenario, although a fairly low key track at the offset, this opening cue lays down a taught and apprehensive sounding atmosphere, which the composer creates via low strings building and then falling back into the shadows which are supported by more strings and also percussive elements that are all bound together via the use of the electronic components. Track number 2, ESCAPING BENDWATER, is a more upbeat affair and the composer brings into play more conventional instrumentation in the way of brass, percussion and also strings to relay a sense of urgency, which are enhanced and embellished again by electronic support. Midway through the track the mood calms a little and although still fairly up-tempo the music takes on a more melodic sound, in fact almost laid back towards the tracks conclusion. Track number 3, ONE LAST JOB is a low key and somewhat fairly downbeat affair to begin with, but soon builds and alters direction and slowly but surely bubbles under the surface until it erupts into a full blown action cue with brass and percussion taking the lead.

Heffes has created an impressive and also an infectious soundtrack, filled with as many twists, turns and tumbles as the movie itself. A powerful and imposing work, that I know will  not be a disappointment for film music collectors. Recommended.