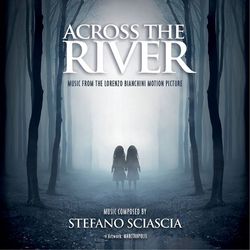 The soundtrack release of the music from the horror movie ACROSS THE RIVER comes courtesy of the ever industrious Movie Score Media and is released on their scream works label, the music that you will hear on the compact disc is a compilation of music that is taken from the score and also is accompanied by cues from composer Stefano Sciascia’s other albums. Seven of the cues included were previously released on his concept album entitled LUX EX TENEBRIS which was issued in 2010, plus thee are two cues taken from his 2004 album MANTRA 22.22, which means that there is just one original cue on the disc, but saying this the entire album is originality personified, the composer utilizing to great effect double bass and highlighting the instruments versatility and also it range. This is also I think an exercise in the use of music in film that is not specifically composed for that film and it demonstrates that music that is not written for any movie in particular can be effective as long as it is placed correctly. This is a highly original work, which is not only quite powerful but at times can be emotive and moving. Sciascia combines music and also musical sounds and effects to generate a soundtrack that is filled with numerous surprises. The composer makes amazingly effective use of sounds as well as melodies within the score and his choral interludes and passages are eerie and haunting, solo violin is also brought into the equation on occasion, the composer using the instrument economically and at times only allowing a fleeting appearance from it, but it is enough to establish a touch of melancholy that is underlined with an aura of uneasiness. The combination of both choir and solo violin is demonstrated to a greater extent in track number 6, LACRIMOSA which although is for the majority of its duration a largely ominous sounding piece does contain its fair share of emotion and has to it a sombre mood. Track number 7, SCOTLAND THE BRAVE, is a somewhat odd and even quirky sounding piece, it begins with a sound that I suppose can be likened to whale song of sorts, to this is added bagpipes and as these melt away the composer introduces strings which are filled with emotion and sadness but at the same time retain a certain air of menace. Track 8, MANTRA 22.22 PART lll, showcases cello and bass and for me is an interesting composition as again it oozes emotion and also has a sound to it that can be deemed slightly oriental. Track number 9, STABAT MATER is probably the most unsettling composition on the compact disc, this is partly due to the effective use of choir within the piece the composer again adding off beat sound effects for greater impact and underlining it all with low slow paced strings with cello solo taking centre stage as if it is guiding the vocals. The same can be said for track number 10, ORIOR which contains an almost guttural sound at the beginning of the cue, which fades into obscurity giving way again the solo cello that is enhanced by subtle use of further stringed instruments, with choir again being introduced throughout.
I cannot stress enough that this is an infinitely innovative work and one that will entertain simply because of its originality. One to watch out for.