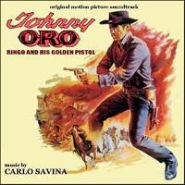 Released in 1966,RINGO AND HIS GOLDEN PISTOL or JOHNNY ORO to give it the original Italian title, was directed by Sergio Corbucci. The main protagonist and also the character in the title was played by actor Mark Damon, the movie was re-tilted simply to cash in on the success of the RINGO movies which had been directed by Duccio Tessari and starred iconic Italian western actor Giuliano Gemma. The plot focuses upon a bounty hunter Johnny Oro who kills for money and treats his way of life as a business so much so that he refuses to take his golden gun out of its holster unless he is assured he will make money for doing so. He decides to let a man (Juanito Perez) live because he sees no reason to end his life if there is no price on his head; this proves to be something that the bounty hunter will later on regret. After killing the mans brothers who do have a bounty on them Perez swears vengeance and forms an alliance with a local tribe of Indians who aid him in a battle against the town and also the sheriff who are protecting the bounty hunter. The musical score is the work of Italian Maestro Carlo Savina, who of course will be a familiar name to collectors acquainted not only with the Italian western but with Italian film music overall, Savina composed numerous film scores for a plethora of genres and also acted as conductor on a handful of scores for Miklos Rozsa and Nino Rota. In fact Savina was credited as the composer of the score for EL CID on Italian prints of the movie back in the early 1960,s. Of course we know this is no so as Rozsa is the true composer of the work. Savina was quite active in the Italian or Spaghetti western genre and penned some of the most memorable scores for some of the lesser known movies. His COMIN AT YA soundtrack for example still remains one of the genres most haunting and popular non Morricone score. JOHNNY OROIS A TYPICAL Italian western score, but when I say typical I do not say this because it is mediocre or indeed predictable, it is typical simply because it contains many of the standard sounds that are nowadays so readily associated with the spaghetti score. Solo trumpet, whistling, solo harmonica electric and classical guitar and echoing percussive passages. In many ways the style that Savina employed was not that dissimilar from Francesco De Masi when he worked on westerns, the sound achieved being a fusion of the Hollywood western soundtrack with brass flourishes and also thrilling and melodic strings that were integrated with the more inventive and original sounds of the spaghetti western. JOHNNY ORO contains numerous themes and relies mainly upon the distinctive whistling of Alessandro Alessandroni to accompany the central character there are also strong trumpet cues within the score that simply oozes class and charisma. This release also includes Italian and English versions of the title song performed by Il Cantori Moderni. This is certainly one of the best Italian western scores written, and listening to it now nearly 50 years after its composition it still grabs ones attention and remains original and fresh. Released on the GDM/Hillside series it is one that you should own. nice clear sound and attractive art work with a number of colour stills and various reproductions of the poster for the movie inside the liner.