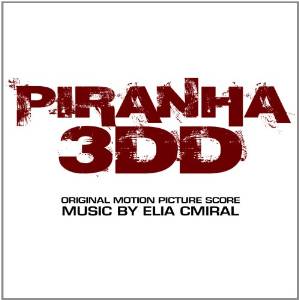 PIRANHA 3DD was not exactly a brilliant movie, ok it had its moments of excitement and also included a kind of tongue in cheek approach to the subject. Elia Cmiral’s score however was not in anyway tongue in cheek or light hearted. Filled with broad, strident and colourful themes that are melodic, upbeat and also foreboding, this score is I have to say an entertaining one, its quite a lyrical work that at times verges on the operatic in its sound and style, the composer eloquently fusing electronic elements with that of the more conventional symphonic, add to this a beautiful soprano voice that emerges at key moments within the soundtrack in the style of MORRICONE,S once upon a time in the west and we have a work that is not only haunting and driving but one that is a joy to encounter, listen to and savour. The percussive elements within the score are booming and fast paced with supporting brass flourishes adding an heroic and urgent atmosphere to the proceedings. The themes within the score are many, each one being unique and original but at the same time coming together to create a great degree of continuity within the score. When scoring this type of movie many composers have often thought it suitable to revert to a John Williams JAWS sound, happily Cmiral has not resorted to this type of scoring instead he has created a tone and style which is all his own, the sinewy and chaotic sounding strings which depict the PIRANHAS is genius as it relays to the listener and also the cinema audience an atmosphere that is filled with menace and purveys a mood that is laden with tense and nervous emotions, the performance being as frenzied and vicious as the Piranha’s themselves. Again I am taken aback by the quality and high standard of music that the composer has penned it is a score that I know works so well within the movie but also it is one of those rare moments when the music has a life of its own away from the images and is entertaining in its own right just as music. Recommended.