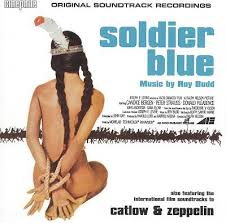 Composer Roy Budd was probably one of the most talented and resourceful musicians to come out of England in decades, he was not only an accomplished composer of film music and jazz but also was a more than competent pianist. His first foray into film music came in 1969 when he was hired to score SOLDIER BLUE, the soundtrack is now an iconic one as well as being an important one for the composer. The actual soundtrack for the movie has never been released, which is a great pity because there is a great deal of wonderful music contained within the film. Instead a re-recording of the score with principal themes arranged and also performed by Budd was released on the PYE Records label on vinyl in 1970, the A side featuring the music from SOLDIER BLUE and the B side containing various film themes that had been given the Budd treatment. Many years later a compact disc was issued in Japan on the SCL label, this was a straight re-issue of the PYE album.

Then in 1999 CINEPHILE which is a label in the Castle communications stable released the music from the A side of the original album along with the music from another Roy Budd western score CATLOW, with the release also containing two cues from ZEPPELIN. It contained informative liner notes and colourful art work, but it still was not the actual SOLDIER BLUE score which many hoped it would be, although it did include a vocal version of FIELDS OF GREEN AND SKIES OF BLUE which had not been released previously. Nevertheless it was still an interesting and entertaining release, showing three varying styles of a talented composer and his ability to adapt to any situation when scoring movies, so it is this edition of the soundtrack or soundtracks that this review is based upon. Budd’s versatility is evident within this compilation as we are presented with two western scores, each one being quite removed and different from one another, with different styles and musical colours being utilised by the composer making each individual and in my opinion unique. Budd creating a more light hearted musical persona for Catlow which went hand in hand with the attitude of the films central character played by Yul Brynner, combining “ho down” type music with light and romantic sounding flourishes, plus there were also a few moments which had at their core a darker and more threatening sound as in INDIAN AMBUSH and to a degree GET THE GOLD both of which echoed the style of Jerry Goldsmith when he scored westerns, such as HOUR OF THE GUN, RIO CONCHOS and 100 RIFLES, brass, strings and an array of percussive elements combined with banjo and strummed guitar to create an exciting and tense atmosphere and even had the odd musical nod to Jerry Fielding along the way, with little nuances and quirks of orchestration that vaguely resemble Quincy Jones‘s McKENNAS GOLD soundtrack.

Again though this is a re-recording there being far more music within the movie and most of this being darker in its style and atmosphere.
For me personally however the main score included on the disc has to be SOLDIER BLUE, it was an affecting movie and also a controversial one. One of it’s taglines being,

“THE STORY THEY WERE AFRAID TO TALK ABOUT,BECOMES THE MOVIE THEY CANT STOP TALKING ABOUT”.

Budd’s score aided the movies progression and storyline wonderfully. The music contained, emotion, sadness, martial themes and also a certain amount of comic content which although present was not overpowering. Budd’s score underlined perfectly the developing relationship between Cresta (Candice Bergen) and US cavalry trooper Honus Gent (Peter Strauss) who are thrown together after a patrol escorting an army payroll and also Cresta are ambushed and mercilessly wiped out by Cheyenne Indians who were attempting to take back Cresta who had been abducted by them and lived with them for two years. Honus and Cresta embark on a perilous trek attempting to reach what the young trooper see’s as civilisation. The trooper thinks of himself as his travelling companions protector but it is in fact Cresta who is the worldly wise of the two. Little by little the two fall in love and this is enhanced by Budd’s touching theme for Cresta which is fragile and and innocent sounding. Budd’s score is a theme laden affair which is thick with haunting and uplifting musical passages, these manifest themselves in cues such as the exciting and exhilarating KIOWA COUNTRY, the beautiful and emotive CRESTA’S SONG, the martial influenced RIDE ON, the haunting FIELDS OF GREEN AND SKIES OF BLUE and the uplifting and up-tempo HOW WONDERFUL LIFE IS. The recording features an instrumental version of the poignant and powerful title song, which is performed over the main titles of the movie by Buffy Saint Marie who also wrote it, this version is arranged and performed by Budd on piano with strings and percussion adding their weight to the proceedings. My only hope is that one day someone will discover the original score somewhere, don’t get me wrong this is an entertaining release and one I for one would not be without, but the original score would be so much better, after all it is an important movie and also a milestone work for Roy Budd. Also included are two cues from the World War One drama ZEPPELIN, a very different style was employed by the composer for this assignment, released in 1971, the movie starred Michael York and Elke Sommer, Budd employing an explosive and dramatic style to underline the action. 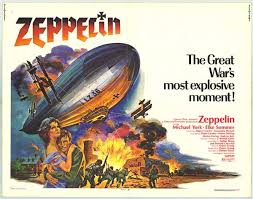 The stirring opening theme complete with sound effects from the movie and also a Mike Samme-esque vocal, ALL YOU WANT ME TO BE which had lyrics by Jack Fishman are included on this compilation. The sound quality on this release at least on SOLDIER BLUE is far better than the Japanese disc, and as mentioned previously it is filled with info and art work which is attention-grabbing and vibrant, well worth investing in.