Set in South Africa MOMENTUM is an action packed movie that by the look of the few scenes I was lucky enough to see at the recording session contains some of the most edge of the seat and fast paced situations that I have seen in recent years. The thriller which stars Olga Kurylenko, Morgan Freeman, James Purefoy and Scot Cooper is a tale about modern crime and begins with a complicated and risky heist that goes badly wrong. Kurylenko’s character Alex Faraday is a strong headed and beautiful woman who is as ruthless as she is attractive who after the heist is at risk of being caught by the authorities she also witnesses one of her fellow heist gang members being murdered viciously by members of an international syndicate, he escapes the scene of the murder but is seen by a Mr Washington (James Purefoy) who with his henchman embarks on a hunt to track her down thinking that she might have the information that her murdered colleague would not give them. It is an intriguing and highly entertaining plot which is at times violent and traumatic.

Stephen S. Campanelli makes his directorial debut on MOMENTUM but is no stranger to the world of motion pictures as he has been involved on numerous major movies as camera man, these include AMERICAN SNIPER, THE CHANGELING, VANILLA SKY, 50 FIRST DATES, SUM OF ALL FEARS, MYSTIC RIVER and MILLION DOLLAR BABY to name a mere handful, a protégé of actor director Clint Eastwood, I am sure this will be the first of many films that Campanelli will helm. The music is by Laurent Eyquem, who although may not be that familiar with collectors as yet has scored numerous TV productions and motion pictures, he first caught my attention with his haunting score for COPPERHEAD and then also his beautiful music for WINNIE MANDELA, but once I had discovered his music I began to look at articles and also his web site and discovered a wealth of beautiful works which he had penned, Laurent was awarded the IFMCA breakthrough composer of the year title in 2014 and has in recent months become one of the industries leading figures in scoring motion pictures. The score for MOMENTUM is a powerful one and contains all the elements that a great action picture needs to support it and also to embellish and enhance each and every scenario, but what struck me about the work and watching the composer put his score to the images was that it also contained a great deal of emotion and at times melancholy, which he at times applied to scenes that contained quite graphic violence, which I think will give the audience a real connection with each character. The music which was performed by players from a number of leading London orchestras was recorded over two days, January 7th and 8th at Abbey road studios, studio 2, Director Campanelli was also present.

The hard hitting compositions for the films many action scenes are striking and driving with the composer fusing electronic support with that of the conventional instruments of the orchestra, what also struck me about the score was that although the majority of the music was action led, it also contained wonderfully thematic material and a great asset to the work is that it actually contains what I call a MAIN THEME proper, by this I mean that the composer took me back to the days of when movies opened with a central theme that was not only melodic but also said to the audiences ok the movie is starting sit back and enjoy, and I think that when MOMENTUM opens (sometime in march 2015) audiences will love it and hopefully will also notice Laurent’s excellent powerhouse of a score. The score is performed in the main by strings and brass. The latter making a massive impression and giving the work a fearsome and relentless sound which one cannot fail to be gripped by. The strings add the melodies and give the work heart and a sweeping lushness that again one cannot fail to notice and love. The score is for me one of the best I have heard for a few years and I am not just saying this because I was present at the recording, straight away I knew that the music was not only good but it was magnificent, it is dark, tense, sad and moving, it all the qualities of an excellent motion picture score and I cant wait for the film to be released and then the soundtrack to get a compact disc release. Watch out for MOMENTUM and also Laurent Eyquem. 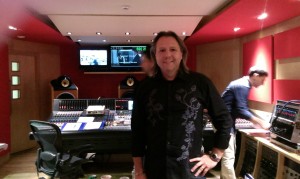 My thanks to Laurent Eyquem and also to all his team and Abbey road staff for their hospitality, also special thanks to Eleni Mitsiaki (ifmca). 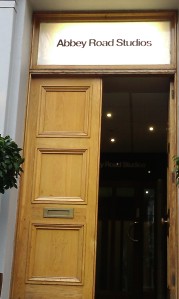