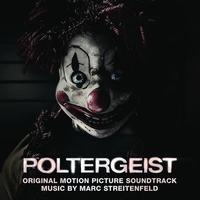 Its inevitable that when a classic movie is re made then comparisons will be drawn up and people who remember the original will nearly always say that the remake is not a patch on the first incarnation of the story whatever it is. POLTERGEIST the new version has recently hit the screens in the UK and there have certainly been mixed feelings about the movie many commenting its not like the old version others preferring the updated version, but really what we should do is look at the two as separate movies which have similar storylines. The same can be said about the musical score for the two movies, the first of course the work of Movie Music Maestro Jerry Goldsmith, the newer edition being composed by Marc Streitenfeld, I have to say straight away I have always admired Goldsmiths work on POLTERGEIST and its sequel, POLTERGEIST 2, in my opinion being a more accomplished and probably more complex soundtrack. The score for the new version of the tale has to be listened to and also considered on its own merits and again we should not compare it to the original in any way because it is totally removed and different to the scores composed all those years ago by Goldsmith. I have to say that Streitenfeld’s music is original if nothing else the composer not really evoking anything from the Goldsmith works apart from a tone at the beginning of some of the cues which for some reason I associate with the original score, it is a powerful soundtrack that when combined with the images on screen works very well and heightens the tension, creates real creepy jolts and jumps and at the same time adds a certain fragility to the proceedings. Make no mistake this is not a romantic or lush lilting work, it is at times full throttle, chaotic frenzied, highly virulent and sinewy to the point of being piercing with its electronic and synthetic sounds that fuse with the more conventional instrumentation of the orchestra. This is at times a harrowing and fearsome soundtrack that is filled with tense and nervous atmospheres and overflowing with grim and foreboding darkness. I dare you to listen to it through headphones with the lights off. POLTERGIEST OPENING is one of the rare moments of tranquillity within the score, it is a lullaby of sorts but although we have a fairly gentle and relaxing composition here, there is still an underlying atmosphere of uncertainty and even a bittersweet undertone that is ominous. This lullaby motif is a times reprised within the score, creating a fleeting moment of stillness and a mood that is comforting amid a sea of stressful musical sounds and is utilised in the final cue of the score HOME FREE purveying a sense of well being and comfort to the listen but this is soon altered as the composer once again introduces an underlying sense of tension which increases as the cue reaches it conclusion with a music box theme that is brought to an abrupt ending with a manic laugh, informing us that all is not well. A sequel do you think ? I would recommend that you take a listen to this score, even if you are a hardened fan of the original film and score. 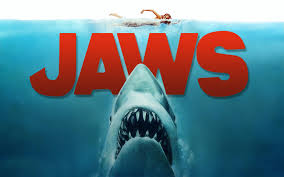 Iconic is a word that can be over-used, thrown around or referred to many times when discussing movies, actors, books in fact any subject even film scores, however in the case of JAWS iconic certainly does apply, it is a memorable and gripping motion picture and one that although does have its pitfalls will always be on a top ten movie list somewhere in the world at any given moment in time and in this its 40th Anniversary year it is fitting that Spielberg’s masterful and gripping horror picture is returning to theatres all over the world so that it can scare the pants off a whole new generation. The music for JAWS is as iconic and groundbreaking as the movie itself and many say that without John Williams menacing and fearsomely mysterious and aggressive JAWS theme or at least the two note motif that represents and accompanies the shark in the movie, that the images on screen would not have had such an impact upon watching audiences. Well to a degree I have to say that this is true although there are certain parts of the movie where there is no music and even without the presence of a score these scenes are just as chilling and exciting if that is the correct terminology. In fact in a way these music free sections are somewhat more unsettling because there is really no warning or no hint of what is about to happen, at times the attack or moment of horror/violence taking place and then after this the music entering into the equation kind of drawing a line under the said moment of terror and I suppose being the sigh of relief in a way because the terror has passed. Within cinema there have a been a number of director/composer collaborations that have stood out as being a match made in cinematic heaven. 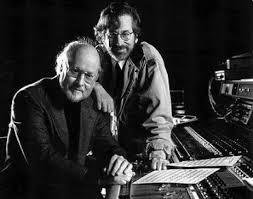 Straight away Hitchcock and Herrmann comes to mind then there is the Leone/Morricone partnership and not forgetting the Jarre and Lean collaborations. But the chemistry between composer John Williams and director/Producer Stephen Spielberg is one that seems to stand out more than others. JAWS is a perfect example of the partnership and displays to us just how music and images can work together in perfect harmony and this harmonious collaboration continues to this day and has brought to us the movie watching public wonderful examples such as RAIDERS OF THE LOST ARK, CLOSE ENCOUNTERS OF THE THIRD KIND, E.T., HOOK, SCHINDLERS LIST, SAVING PRIVATE RYAN, JURASSIC PARK, LINCOLN and the much criticised AMISTAD. Williams having worked with the director on all of his movies apart from, DUEL, THE COLOUR PURPLE and BRIDGE OF SPIES. Plus let us not forget that the composer has also given musical life to films such as, THE FURY, FAR AND AWAY, THE WITCHES OF EASTWICK, THE EIGER SANCTION, THE TOWERING INFERNO, EARTHQUAKE, HARRY POTTER, SUPERMAN, SEVEN YEARS IN TIBET, MEMOIRS OF A GEISHA, HOME ALONE, BORN OF THE FORTH OF JULY etc. Working with numerous filmmakers over a period of some 60 plus years, his career began as a pianist working in clubs and then he began his career in writing music for film by working with composers such as Franz Waxman, Bernard Herrmann and Alfred Newman, during the 1960,s Williams began to compose for television when as Johnny Williams he wrote the scores and themes for productions such as LAND OF THE GIANTS and LOST IN SPACE. Born on February 8th 1932, John Towner Williams, he is probably the most well known composer of film music in the world, he is the winner of five Academy Awards (Oscars) seventeen Grammys, three Golden Globes, two Emmy’s and five BAFTA’S. He is not only well known for his film scores but is also a gifted composer of concert music and a talented and in demand conductor.

When the soundtrack of JAWS was originally issued on the MCA label it was not a real representation of the gargantuan work that the composer had contributed to the project, the release contained just barely 25 minutes of music so when DECCA records issued a special compact disc which contained 52 minutes of music it was not only a better representation of Williams score but one that contained cues that were not actually utilised within the finished version of the movie. 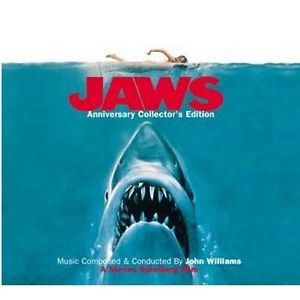 One of the highlights of the expanded CD release for me personally is SHARK ATTACK a short lived cue but one that is essentially the mood, essence and atmosphere of the score which is purveyed in all its frantic glory in a mere 1 min and 18 seconds, plus there is also the ominous sounding INTO THE ESTUARY where the killer shark leaves the Ocean and moves closer to shore when it swims into the estuary killing and devouring one victim and sending others into a state of panic and shock and the exuberant, THE GREAT SHARK CHASE in which the composer brings together the dark and threatening thematic material that the audience associate with the shark and adds to this a more wistful and grand sounding theme. 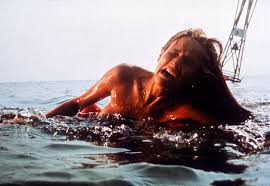 When you think about it the theme that accompanies the blood thirsty great white is a simple one in fact so simple that if you were to hear the two note motif played away from the movie you probably would not take that much notice of it, but combine its mysterious, lumbering almost awkward and menacing persona with the atmospheric images on screen and it brings to the surface a veritable onslaught of feelings and emotions. Try watching the scored sections of the movie with the sound muted, yes the images are effective but without Williams soundtrack they do seem to be lacking slightly. Its an observation that I made whilst watching the movie, the audience kind of know there is something lurking in those weeds at the bottom of the sea, but it is not a situation that actually becomes uncomfortable or threatening until Williams shark motif strikes up and this is even before we see the predator. Cellos, horn and piano combine to create what is one of the most well known film themes of all time, for me JAWS or at least the motif for Mr Shark is as terrifying and familiar as the screeching strings from the shower scene in PSYCHO and as foreboding as James Bernard’s virulent sounding Dracula theme from the Hammer films productions. As it instantly establishes a sense of dread and an atmosphere of fear. Written at a time when film music in my opinion was going through something of a low period with the increased use of synthesisers, electronic aids and of course the emergence of the song score, with producers tacking on songs to the soundtrack of movies which had little or no relevance to the film or storyline, Williams was I think responsible for rekindling peoples awareness of the importance of music in motion pictures, of course two years later he would score STAR WARS with a fully symphonic soundtrack with references to days gone by in Hollywood and composers such as Erich Wolfgang Korngold for example. 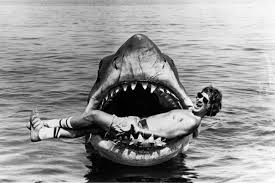 JAWS is not a score that is solely filled with action music for the giant predator, it also includes jaunty sea shanty’s and at times evokes memories of movie scores from Hollywood’s golden age again the music having a Korngold, Friedhofer sound to it which is stirring and exhilarating. So a landmark score for the composer and also a cinematic success for Stephen Spielberg, JAWS is as they say iconic.