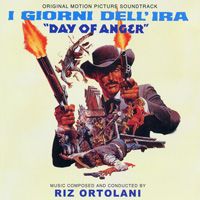 DAY OF ANGER was released in 1967, it starred the inimitable Lee Van Cleef and when watching the movie it becomes evident to all just why he was the main man when it came to the spaghetti westerns. Van Cleef portrays ageing gunfighter Frank Talby who decides that he must re-establish himself as a force to be reckoned with so guns down a local town Sheriff. The movie also stars another genre stalwart Giuliano Gemma as Scott Mary a downtrodden individual who was friends with the Sheriff, Talby takes Scott Mary under his wing and teaches him how to use a gun, after a while however the protégé becomes a threat and at the movies climax the teacher must face the pupil in a deadly showdown. Directed by Tonino Valerii who worked as an assistant to Sergio Leone and went on to direct THEY CALL ME NOBODY, DAY OF ANGER was certainly one of the genre s more high profile movies and contained a surprisingly savage sounding score by composer Riz Ortolani. The soundtrack was originally released back in the late 1960,s on an RCA long playing record. 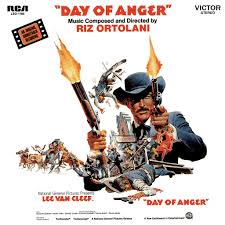 Ortolani is a composer that has written his fair share of western scores both for Italian and American productions, but when working within the genre of the spaghetti western the composer never seemed to quite get the chemistry right, many of his scores sounding as if they were just tracked with his music rather than it being specifically scored, but with DAY OF ANGER the composer created a sound that was not just melodic but was also suitably savage, brutal and powerful like many of the works fashioned by his peers such as Morricone, De Masi, Nicolai and Fidenco etc. The soundtrack was re-issued on the RCA label on compact disc in 1991 but this was just a straight recording of the LP release paired with selections from Ortolani’s score for BEYOND THE LAW (another Van Cleef movie). In 2006 Hillside CD productions and GDM released a compact disc that not only contained the Long Playing records content but also a further sixteen cues taken from the actual film score in full stereo. The result is a stunning release that is brimming with numerous themes and overflowing with Ortolani’s exhilarating and infectious soundtrack. The CD sold so well that Hillside had to re-press the soundtrack and re-issued it with the same art work but a different background colour. Certainly a score worth having and one that will keep any fan of Italian western scores entertained for hours on end. I live in hope that Ortolani’s excellent score for THE HUNTING PARTY will one day see the light of day. Now that’s a savage soundtrack.