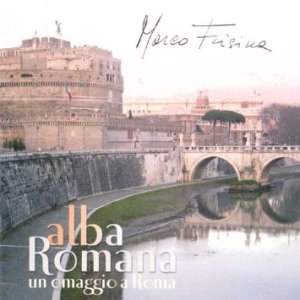 There are many composers who write for the cinema and television that are so talented but still seem to be overlooked by many within the industry and also by film music aficionados. I think that Marco Frisina is one such composer. Frisina has written numerous scores for movies and also television productions within Italy and of course because of his connections with THE VATICAN has also written a great deal of religious music. But it is his film and television music that attracts me the most although saying this I have found myself listening to his non cinematic works and becoming completely transfixed by his haunting melodies and moving compositions. My first recording of his was ALBA ROMANA-un omaggio a Roma. It was something of an awakening for me as I have to say I had not been aware of his music up until that time, I had returned from a trip to Rome and was somewhat mesmerised by the eternal city, plus it was at a time in my life that I found myself at a crossroads of sorts not knowing which way to go. I was given the recording and on the first listen found myself completely overtaken with so many emotions, the music washed over me and in fact it reminded me of my short but beautiful time in Rome. As I listened to the beguiling melodies I remembered the Spanish steps, The Trevi fountain, Trastavere, The tomb of the Unknown soldier, The Colosseum, The Roman Forum and Circus and of course the ultimate site of The Vatican which I found both inspiring and powerful. This hustling and busy city which can become a tranquil and soothing haven simply by turning down a side street into a piazza that contains a small church and a fountain is one of the greatest places in the world. Frisina’s touching and delicate music conjures up perfectly a city that has so many faces so many persona’s and such a vitality and at the same time posses a serenity that I do not think you would find anywhere else on earth.

The music for ALBA ROMANA is in a word stunning, the composer wrote a score that was brimming with lilting and rich melodies, majestic passages, romantic pieces and proud and celestial sounding cues, it is one of those works that one can just pop into the player and leave it never touching it, never skipping any tracks, just sitting and listening will enrich and reward you no end. Fully symphonic, with choir, solo vocals by Paola Cicchi, guitar solos, organ, strings and brass supported by percussion and also heartrending cello and viola solos that are affecting and mesmerising and I can only describe the performances as being painful in a nice way because there is so much emotion within them, this is a work that every one should have, it is a recording that will open many emotions within you, maybe also it will like it did me rekindle bittersweet memories that bring both happiness and hurt and bring a tear to the eye.