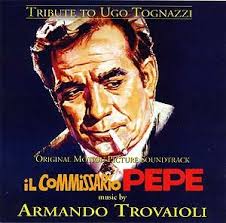 Going back to the 1990,s in fact to 1995 for this Compact disc release, billed as a tribute to Ugo Tognazzi, it contains selections of cues from three of the actors movies. IL COMMISSARIO PEPE music by Armando Trovaioli, SLENDORI E MISERIE DI MADAM ROYALE music by Fiorenzi Carpi AND SISSIGNORE with music courtesy of Berto Pisano. All three scores are perfect examples of Italian film music from the late 1960,s and the early 1970,s. IL COMMISSARIO PEPE is for my money probably the better of the three soundtracks included here or at least the most entertaining, but this is only because like most of his scores Trovaioli includes so much rich thematic material which leaves the listener thinking how could so many great themes possibly come from one film score, the orchestration of this occasion is remarkably refined, the composer utilising, laid back Hammond organ, whistling from Alessandroni, luxurious sounding stings and easy going saxophone solos that in turn are complimented by polished piano performances a song WE’LL KEEP TRYING performed by Lydia McDonald who also wrote the lyrics. Plus there is the flawless vocals of Edda Dell Orso, what more could you want? To try and identify a stand out track is impossible because every cue is a delicious and riveting listen. However I was rather drawn to track number 7, WALTZ THEME in which harpsichord is used to great effect along side romantic and lush strings and also track number 8, LOVE THEME, which is what is says a beguiling and sensual piece with steamy Hammond organ, harpsichord flourishes and underlying passionate strings that are present throughout but never overpower or overplay the harpsichord. Track number 9, too is a text book Italian film music cue, with whistling, strings, jazzy saxophone percussion adding a rhythmic backing and again the harpsichord adding a great atmosphere to the proceedings. The score has since this release received an expanded edition release, but I am content with the 9 tracks I have here another triumph for Trovaioli. 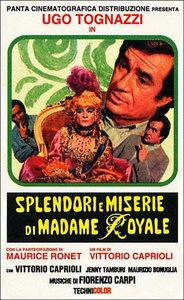 SLENDORI E MISERIE DI MADAM ROTALE is next in the running order with music composed and conducted by a somewhat overlooked Italian film music Maestro, Fiorenzo Carpi, 7 cues represent his score on this release, which is to be fair quite a nice listen, with Carpi even providing a parody of the Spaghetti western score in the cue COME IN WESTERN, there are some nice touches within the score his use of woodwind and piano underlined by strings etc, the movie is a comedy/drama, which at times does not get its punch lines over to non Italian audiences, (its lost in the translation as they say). Carpi score however is an interesting listen and seems to musically dip its foot into every genre of film imaginable, western, period, dramatic and of course comedy and even if it does have a particularly annoying vocal it is still worth listening to too.

SISSIGNORE is next with the composing duties being taken on by Berto Pisano who is another unsung hero of the Italian film music world. This an upbeat affair for the most part with an opening theme which bares more than a passing resemblance to CLASSICAL GAS by Mason Williams. The film was a comedy written, directed and starring Ugo Tognazzi, Pisano’s score is suitably upbeat and at times chaotic, but also contains some nice less furiously full on moments, a jazz orientated flavour weaves in and out of the score with Pisano adding just the right amount of dramatic content and diluting this with little touches of comedic sounds before things get too serious.

Tracks such as TEMA DI OSCAR and JUMPING ON THE SAND are exhilarating and filled with great musical hooks to keep the listener interested plus there are cues such as SKI LIFT that contain an almost Count Basie sound and ATTIMO PER ATTIMO which has some wonderful saxophone work. Like IL COMMISSARIO PEPE, SISSIGNORE is filled to overflowing with vibrant and infectious themes. This is a fantastic compact disc and I notice is still available on certain shopping sites on the internet. It would be re-miss of me not to say GO AND BUY IT.