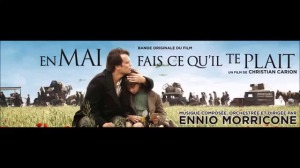 Well Ennio Morricone is certainly getting his creative juices flowing this year two new film scores, THE HATEFUL EIGHT and also EN MAI FAIS CE QU’IL TE PLAIT are released and although both are completely removed from each other do not disappoint, the composer lending his considerable talent and finesse to both storylines. EN MAI FAIS CE QU’IL TE PLAIT is a story set in 1940, German forces have already entered France and are pushing onwards crushing much of the resistance put up by the French the British and the French people. Alarmed at the ferocity of the German invasion and its ever gaining momentum the inhabitants of a small village, PAS-DE-CALAIS decide that it will be better to leave everything and go on the road and make their way to the coast. The storyline throws together many people from the village and also individuals from outside of Pas-de-Calais, one of these is a Scottish officer who’s entire unit has been massacred by the Nazi war machine who decides to joint the villagers in their trek to the coast in the hope that he might be able to get a boat and return to England. The score by Ennio Morricone is in a word outstanding and the best way to describe it is to say that this is classic Morricone. The compact disc opens with EN MAI, which is the longest cue on the soundtrack release, weighing in at 8 minutes and 55 seconds, it begins with a four note motif which is repeated over and over with every now and then strings punctuating the piece changing key and chords until the theme begins proper, woodwind introduce the subdued and plaintive sounding theme, whilst all the time the four note motif is repeated in the background. Memories of Morricone from the 1960,s and 1970,s come flooding back, as the theme builds and further establishes itself, the string section increasing in volume and finally a rich sounding romantically laced composition overwhelms everything. This is Morricone at his melodic best, it is emotive, affecting and superbly mesmerising and most definitely a goose bump moment. What I love about this score is that Morricone does not in any way over use the central theme, in fact I would say that the majority of the cues here all sound very different as in there are fresh and vibrant themes present within each and everyone of them. There is melancholy, drama, fear and every other sort of emotion conveyed within this work, track number two L,ETAU SE RESSERRE is a more dramatic and slightly more urgent composition, the Maestro employing strings to great effect to create an atmosphere of unease and apprehension. 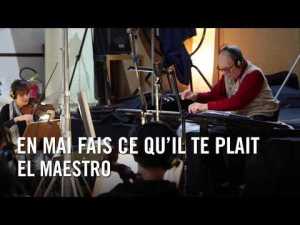 Track number three ILS RESTERONT TROIS is a return to the central theme but not the same arrangement as the opening cue, this is even more lush and lavish sounding in its introduction, the strings that open the piece give way to woodwind for a while but the strings then make a return to give the variation of the theme a fuller working, again classic Morricone, that is delicate but also emotionally overwhelming. Track number four TRAVERSER LA GUERRE, is a return to a darker sound, sombre sounding strings, and shady nuances prevail here but saying this even amongst this we still here a faint melody. This is a score that I would recommend as a must have for any devotee of Ennio Morricone, it evokes past triumphs from the Maestro and also tells us that Morricone is still the Master. Available on Quartet records. 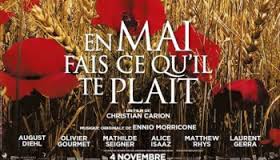