Two spaghetti western scores on one compact disc, both by the same composer Bruno Nicolai, yet both original and individual in their style and sound. 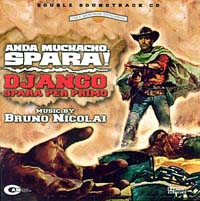 Anda muchacha spara (Dead Men Ride) is a western soundtrack from 1971 which most definitely belongs to the Morricone-esque school of western scoring, with plentiful use of choir solo trumpet, piano, organ and racing chase music. Django spara primo (Django Shoots First) from 1966 is more Americanised in style, displaying hardly any signs or musical trademarks that are normally associated with the spaghetti western, save for the central theme performed on solo trumpet. The remainder of the work is quite low key and fully orchestral, rather than utilising theelectric guitar as in other western scores that Nicolai worked on during this period.

Anda muchacha spara is the star score on this cd, containing all the stock sounds and attributes now associated with the western all’italiana: solo female voice, showdown music, tense riding themes and Mexican sounding mariachis. There is even a cue (track 5) that resembles Morricone’s ‘Addio Cheyenne’ track from Once Upon a Time in the West, a clumsy sounding but faintly attractive and entertaining piece employing a lazy sounding piano accompanied by a laid back banjo solo.

Track number eight is one of the compact discs highlights, with Nicolai utilising to great effect the flawless vocals of Edda Dell Orso (supported by underlying strings and the wonderful harmonising of IL CANTORI MODERNI). Nicolai produced an entertaining and highly accomplished scores for both of these movies, and excelled in his orchestration and composing on ANDA MUCHACHA SPARA..

The tracks on the compact disc do not actually have titles. Anda muchacha spara has a running time of just 24 mins 49 secs and takes up tracks 1 to 15 on the compact disc. Django spara primo is slightly longer in duration, at 25 mins 04 secs, and is numbered from track 16 through to track 28. So, a running time of just under 50 mins; but well worth the money even if its for the first score alone. Packaged adequately by CAM with descent art work, info on both movies and a short piece on Bruno Nicolai. Recommended.