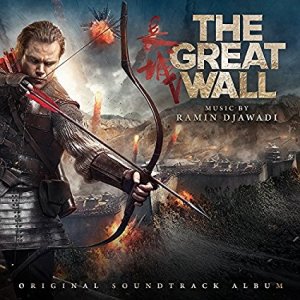 THE GREAT WALL is set a thousand years ago, or so we are led to believe, and the events that unfold are obviously true, ummm, well let’s forget about the movie and skip to the score, or at least let’s just say the movie has done reasonably well at the box office and its essentially a great piece of adventure and escapism produced by American and Chinese filmmakers and starring Matt Damon. The music was originally destined to be provided by the great James Horner, but because of the sad events which are all aware of this was not possible. Music is by flavour of the month composer, Ramin Djawadi, of course he has made a name for himself scoring that popular TV series GAME OF THRONES plus a few other movies along the way, that include PACIFIC RIM, CLASH OF THE TITANS, DRACULA UNTOLD and FRIGHT NIGHT to name a handful. THE GREAT WALL is to be fair a good action score, in fact it is pretty much wall to wall action as far as the score goes. Its brassy, percussive and contains the odd little respite or interlude where we are treated to little glimpses of melodies which are of a more forgiving and lilting nature. The score opens with NAMELESS ORDER, which is introduced by choir which is childlike in its performance and overall sound, this quiet and quite calming opening soon builds into something that is more powerful and action orientated, percussive elements underline driving strings, whilst the choral performance continues but becomes louder and more pronounced, strings add their weight to the proceedings giving the piece a more urgent persona that becomes rich and almost luxurious. Orchestra takes on the theme created by the choir and this is expanded upon and developed, finally as the cue reaches its end the choir returns and once again becomes the mainstay of the piece. The next cue is the PROLOGUE which is the scores secondary theme, this is action through and through, the composer creating a driving and unrelenting composition, which relies once again on percussion, strings and horns to purvey a sense of urgency and power. Track three WHAT A WALL melds into track two or so it seems when listening to the score, again action led with brass and strings being given a thundering and highly rhythmic support by the percussion. The themes that the composer has fashioned for this movie are hard hitting but at the same time are relatively simply and straight forward, in many ways this is a return to the style of film scoring that we know and love from the 70’s through to the late 80’s where soundtracks still contained themes that one could hear developing and growing throughout the score. The film is essentially a bit of fun, but it’s a bit of high octane sometimes violent imagery, which does not take a lot of concentration to view. The score too is pretty down to earth and it does what it is supposed to, it underlines the action, enhances the lighter moments and overall works as a film score and also as music to listen to without any of the images. Well worth checking out.