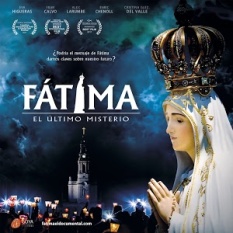 A few months back I reviewed a couple of soundtracks by a composer who I thought was very talented, I also thought although he was a young composer he had lots of potential and wrote melodies that displayed a real maturity. His scores for LUZ DE SOLED and POVEDA contained so many wonderful melodies and were both filled with emotive and dramatic musical passages, each score containing delicate and fragile nuances that were haunting and entertaining. Oscar Martin Leanizbarrutia is a composer who will I know be in much demand soon. He has recently written the scores for two more projects, RED DE LIBERTAD and FATIMA EL ULTIMO MISTERIO. Both very differing subject matters but each containing scores that are most definitely in keeping with the individual movies subject matter, RED DE LIBERTAD has several dark and sinister sounding moments and FATIMA EL ULTIMO MISTERIO is a score that is deeply moving and highly charged both dramatically and emotionally. When I spoke to the composer in intrrview about his previous projects I was surprised to discover that conventional instrumentation did not figure a great deal within both scores, this was down to budget and the composer employed synthetic and electronic mediums to relay his wonderfully emotional musical phrases. For the latest two scores I honestly cannot tell if they are performed symphonically or synthetically, the sounds being polished and styled in such a way that there are only maybe one or two occasions when I might have thought that is electronic or samples. FATIMA in-particular is a beautifully crafted work and it is filled with a mystical and celestial sound throughout, choir and woods come together underlined by strings which are also supported by the use of sharp sounding brass and a proud emotive sounding horn arrangement that adds depth and also gives the work an imposing and affecting musical persona, the composer also adds solo guitar and timpani at certain points, the latter giving certain cues a martial sound or a feel that is taught and urgent, the guitar passages although fleeting can be a settling and calming interlude, overall the score is one that one will listen to many times and upon each visit will discover a sound or a nuance and phrase that maybe one had overlooked. Many of the cues are lengthy, thus having a chance to develop and grow. The end credits cue for FATIMA is a triumph, and one that I have returned to many times, solo piano laced with underlying string effects choir and anthem like brass flourishes all come together to create this rich, lush and opulent sounding piece, that drives, glides and soars, many of the themeatic properties heard in the score intertwining as the composer fashions an end of score Overture.

The style employed here is not dissimilar to that of composers Marco Frisina and Mark McKenzie, it is a multi-themed work in fact so many themes and motifs are within the score that it is hard to come to terms that all this music is from one movie. As I have said the two scores are somewhat different RED DE LIBERTAD being, slightly more downbeat, and it also has a darker and more ominous style and sound to it. The film set in WWll tells the story of a nun who faces the Nazi’s and helps refugees and prisoners escape the concentration camps that were set up in France. The composer successfully underlines the drama and the tense and urgent storyline, but also manages to add a human and emotional side via hauntingly intricate and beautiful  themes.  I cannot be sure, but I believe symphonic string and brass elements were used within the score, plus a mesmerizing solo voice performance, and rumbling percussive elements,  because there is a such a richness present throughout, particularly because of the sorrowful Cello that from time to time raises its musical head, (listen to track number 8, SALIENDO DEL CAMPO/PIERRE). Which is heart-breaking and inspiring all at once. These components are combined with synthetic options to bring to fruition a sound that is enthralling, exciting and entertaining. Shadowy and sinister sounds are mixed with lighter and fragile sounding phrases, to create a well balanced and wonderfully melodious work, that I know you will return to for repeated listens. Both scores are worth adding to your collection, and Oscar Martin Leanizbarrutia is a young composer that you should look out for, if you have not heard any of his music, I suggest a trip to Spotify to check out his musical wares. Highly recommended.