Has it really been 25 years since Schindler’s List was released? Yes, it has, over a period of 25 years a lot has happened, but my recollection of this movie is still vivid and fresh in my mind. The impact that this film had upon audiences and generations was immense. In fact, when I was contemplating writing something about the films anniversary, I did think twice as I felt I could not put into words the feelings I had for it. It is a haunting and harrowing movie, a story that shocks and saddens and one, that makes you feel disgust at what the Jewish people suffered at the hands of monsters. It is also a movie that should be shown to everyone in the hope that awful events such as the Holocaust never happen again. But it saddens me to say that History has a terrible habit of repeating itself. And although there has not been anything on the scale of the Holocaust since WWll there have been many wars and conflicts that were all about ethnic cleansing. I saw the movie once in the cinema and it was such an emotional experience I could not go back but instead watched it in the confines of my own home.

I would think why did this happen? How could human beings do this to other humans, could I have done this even if it was war, could I have killed women and children without a second thought without any remorse any emotion, the answer is of course No. The thing about SCHINDLER’S LIST is that it a true story, it happened it was as awful it was as sickening and it was as terrifying as it is presented on the screen, in fact probably more so. These were real people, real lives, Sons, Daughters, Fathers, Mothers, Grandparents and Grandchildren.

All I remember when leaving the cinema after seeing the movie was a sense of loss, of emptiness and of shock. The black and white images made it seem even more real. The film is set in Krakow during the second world war the Germans which are occupying the city have forced Polish Jews into the Ghetto, which is already overcrowded and squalid. Oskar Schindler, who is German, and a businessman arrives in the City, he is hoping to use cheap Jewish labour to make money and become a wealthy. Schindler is a member of the Nazi party and bribes German high-ranking officers and members of the infamous SS so that he can establish a factory where his workforce will produce Enamelware. Schindler then enlists the assistance of Itzhak Stern who is a local Jewish official who has good standing in the community and has many contacts with black market dealers. Stern helps Schindler to get financing for the factory. Schindler stays close to the Nazi’s and begins to reap the rewards both monetarily and status wise. Stern meanwhile takes care of the administration side of things, Schindler insists on employing Jewish workers because they are cheap labour, and Stern all the time is adamant that they are important for the German war effort, thus stopping them being sent to concentration camps or murdered by the Nazi’s.

The SS send a hard line second lieutenant to Krakow who is put in charge of the construction of the Plaszow Concentration Camp, a task that he relishes and one that is soon completed. When the camp is deemed ready the German officer orders that the Ghetto be emptied, during the liquidation of the Ghetto many people are killed. Schindler witness’s the carnage and is affected by the horrors that he has seen. He is drawn to a young girl in a red coat who he sees hiding from the soldiers. He later sees her tiny body in a wagon filled with corpses. Schindler knows that he must maintain friendly terms with the Nazi’s and the SS officer, who after the emptying of the Ghetto takes to using Jewish prisoners and workers as target practise as he stands on the balcony of his villa. Schindler bribes him and gives him expensive gifts so that he can still have the support of the SS. As Schindler spends more time at the factory he concentrates less upon making money and more and more upon saving the lives of the Jewish people. He then bribes the SS officer and can build another camp. The Germans start to lose the war and the Reich order that the prisoners at Plaszow are to be shipped to Auschwitz, but Schindler convinces the SS officer to allow him to take his workers to a new factory in Brinnlitz which is close to Schindler’s home town.

Together Stern and Schindler create a list which has the names of over 800 people on it. These are the Jews that will be transferred to the new factory. But things go horribly wrong when the train carrying them is wrongly re-directed to Auschwitz, Schindler is on hand again and bribes the commandant of the camp with a bag of diamonds to release them. At the new factory, Schindler will not allow the SS onto the factory production floor and encourages the workers to observe their Sabbath. Over the next eight months or so Schindler spends much of his fortune on bribes to high ranking officers in the German army and the SS, to keep his workforce safe. 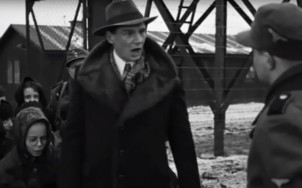 As the war comes to an end Schindler runs out of money, and he must leave because he is still seen as a Nazi party member and the Russian Army is fast approaching. In his last act before leaving he convinces the German guards at the factory not to kill the Jewish workers there, and employs them to leave too, so that they may return to their families as men and not as murderers. Schindler says goodbye to his workers hoping to head away from the Russians and eventually surrender to the Americans who are approaching from the west. Before he goes, his workers present him with a signed statement, saying that he played a major role in saving Jewish lives and they also give him a ring that is engraved with a quote that reads WHOEVER SAVES ONE LIFE SAVES THE ENTIRE WORLD. Schindler is touched but also feels ashamed as he feels he should have done more.

Spielberg’s movie is an iconic production, and one that will live forever in the minds of all who have seen it. The musical score was by long time Spielberg collaborator John Williams who created a highly emotive soundtrack to underline the events that are unfolding on screen. Williams enlisting the flawless playing of violinist Itzhak Perlman, which added a fragility and a richness to the work.

The cue I COULD HAVE DONE MORE is particularly poignant and affecting. The score is one that I listen to regularly, and on each listen, I am still moved to tears, its fragility and emotive content being heartrending and effecting. Which is why I pleased to hear that the score will be re-released this December on La La Land records in a two CD set. This is Spielberg’s masterpiece and a homage to those who lost their lives in the Holocaust, it is also a film that contains one of composer John Williams most emotional scores. 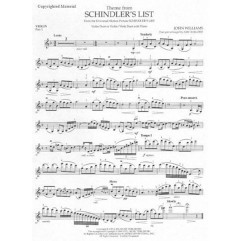