In a film about ghosts, what  is scarier? When you see the ghost or when we can’t see the ghost, I think it’s the latter, because we know there is something going on or something is about to happen, but we are not sure when or what it is. I also think that a less gory or violent horror movie is scarier than the slasher type films or even flicks like SAW for example. It’s the mystery and the apprehension or the uncertainty that is lingering that makes an audience sit on the edge of their seats. Director Frank LaLoggia got the mix just right when he made THE LADY IN WHITE back in 1988. When it was released I don’t think that many really took a lot of notice of it, but since the release of this independent production I am of the opinion that the film is a thinking man’s horror picture, it does actualy make one stop and think about what is going on in the story and relies upon the mystery rather than any violence to create a superb atmosphere that is thick with tension. The story is about Frankie a nine-year-old boy who lives in a small-town Willow point Falls, the story unfolds as the now adult Frankie who has become an author is returning to his home town and tells the story of THE LADY IN WHITE. 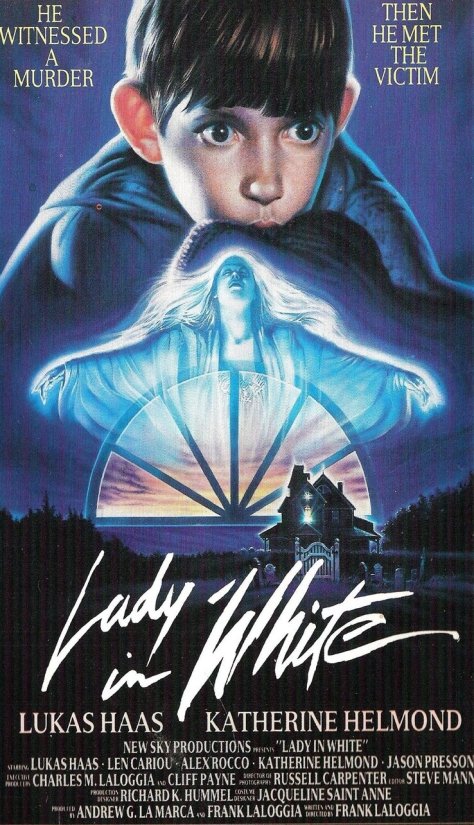 The nine-year-old is locked in the school cloakroom by two bullies at the school and is left in the dark room on Halloween, it is whilst locked in the room that Frankie witnesses a murder, but the murder victim is a ghost of a young girl who has red hair. The murder is brutal and upsetting for Frankie who tries to get out of the room but is himself attacked and strangled by a shadowy figure who comes from the darkness, Frankie passes out and as he becomes unconscious he see’s the young girl again, who speaks to him and asks him for help to find her Mother. Frankie is suddenly awoken by his Father Angelo who has gone looking for him, the boy is taken to hospital and the Police arrest the school janitor thinking that he is responsible for the attack on Frankie. Whilst recovering Frankie is given a newspaper article and via this he learns that there were eleven child murders and one of them was the girl who spoke to him, he learns that her name is Melissa Ann Montgomery. 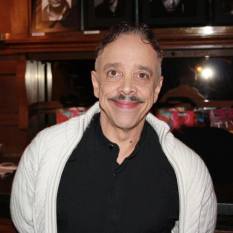 The young girl continues to appear to Frankie and the boy and the phantom become friends. Frankie returns to the cloak room as he has remembered hearing the air vent grille being unscrewed just before he was attacked, he opens the vent up and finds several items, one of them being a hair clip which it transpires belonged to Melissa. Frankie takes the hairclip and a class ring and leaves the cloak room. THE LADY IN WHITE is much more than a ghost story, it is a mystery a murder story and also a tormented story of love between a Mother and daughter that has extended beyond their time in the world of the living, and that’s all I am saying, I think you should find the movie and watch it, you will I know be engrossed and intrigued. Produced and directed by LaLoggia it makes for compelling viewing.

LaLoggia also composed the musical score for the movie, and I have to say it has been among my top fifty film scores ever since I got the LP record on Varese Sarabande back in 1988. 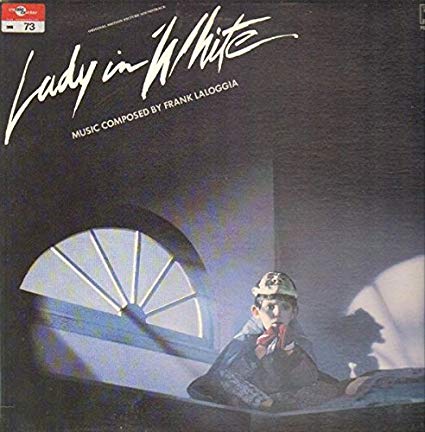 I later picked up the CD version on South West records which is a must have as it contains over 70 minutes of music and includes the electronic score that was not used for the film. Both are by LaLoggia, but I am so glad that he decided to utilise the symphonic edition of the work, This a delight to listen to and within the film it creates so many wonderful atmospheric moments, it is dramatic, sinister and also has to it a child-like content that is attractive and enriching, I have to say that the electronic version is somewhat jagged and soulless, but with the compact disc version you can make up your own minds. The CD also contains lots of stills and info on the movie including an interview with the director/composer LaLoggia. Frank LaLoggia is a multi-talented individual, actor, producer, writer, director and composer, the score he wrote for LADY IN WHITE in my opinion is outstanding, it is a theme laden work, and a soundtrack that is not only engrossing but entertaining. The compact disc is split up into seven cues all of which are suites, each suite has a generous running time of twenty minutes plus, the symphonic score occupying the first six suites and the unused electronic score is represented within track number seven. LaLoggia weaves a motif led score which utilises small orchestra comprising of woods, brass, timpani and percussion which are all acting as support to strings that are embellished by a scattering of synthetic support and further enhanced by the affective utilisation of adult and children’s voices.

Right from the start the composer makes wonderful use of the string section and creates haunting and mesmerising tone poems with the woods that are enveloped and engulfed by sweeping string passages that are vibrant and bright in their sound and style. There is no way of comparing the style employed by the composer in the score as it is fresh and original. LADY IN WHITE is a thought-provoking movie and one that has a wonderfully lyrical sounding soundtrack, I for one can’t ever get enough of both and return to both score and film regularly. Why LaLoggia did not create more music for films I do not know, however I can also recommend his score for FEAR NO EVIL. LADY IN WHITE is an energetic work, the composer fashioning atmospheric and gorgeous sounding pieces throughout, from comedic sounding chase sequences to dark and sombre tracks which melt into exquisite sounding themes that have a melancholic or romantic feel to them. This is a score that has something for everyone, got it in your collection? No, why not? 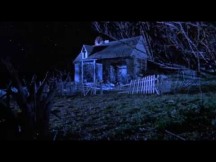