At last a new score from multi talented composer Johan Soderqvist, I have for many years admired this composers work, his music for LET THE RIGHT ONE IN being the score that blew me away and convinced me to watch out for his future scores. The latest addition to the composers impressive list of credits is the soundtrack for the movie AMUNDSEN. This is an inspiring score for a true and even more inspiring story, it is a historical epic about a hero of Norway Roald Amundsen who is best-remembered for his achievement of reaching the South Pole in 1911. The score is one that is filled with atmospheric sounds and themes, the composer creating some wonderfully haunting and melodic passages that seem to come from nowhere, his style is so original and fresh, he is also a composer who experiments with sounds as well as music, fusing the two to fashion effective and innovative nuances and motifs. For example he will utilise synthetic sounds and over these he will introduce a plaintive and melancholy piano solo then support this with melodious and romantic strings as in track number three on this score entitled TWO BROTHERS. In this fairly brief cue the composer purveys so many emotions and fills the listener with hope, sadness and romanticism all at once. Soderqvist, is a master at the use of unusual sounds within his film scores the usual becomes the innovative and musters the interest of either the watching audience or the film music collector who is listening to the score just as stand alone music. Maybe there is a touch of the drone style of scoring within this particular score where score melds into sound design, but in this case it is warranted and also well executed. The cue THE ICE RAVINE/NAMING THE MOUNTAINS is such a track, mostly consisting of atonal sounds but from time to time there is a glimmer of a melody or at least a hint of it, I thought towards the end of the three minute cue there were certain attributes that could fall into the Morricone style of scoring, being dark but at the same moment containing a lilting theme underneath the atonal elements. AT THE SOUTH POLE is a near anthem like piece and I suppose is the closest that the score comes to being lush or lavish, the theme builds to a crescendo of sorts that is quite emotional, then fades back into a piano led piece underlined by strings. There is also action cues within the score, as in the thundering and urgent sounding ICE BEAR ATTACK, which although short in duration is relentless in its ferociousness. Soderqvist has created a score that conjures up a feeling of desolation and one of loneliness and listening to the music one can imagine just a little how vast an area that Amundsen found himself in. THE CHILDREN is another cue that I was attracted too, piano again with underlying strings augmenting then the piece moves into a poignant theme performed by guitar and piano, delightful This is a score that I think you will enjoy very much, there are so many emotions purveyed throughout its duration that it is hard to fully describe, but I will say it is a score to take a listen to, released by MOVIE SCORE MEDIA  now on digital platforms and soon to be released on CD by Rosetta. 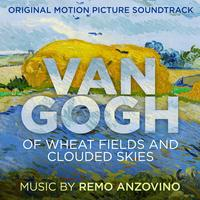 Sedona International Film Festival have presented the Great Art on Screen series with “Van Gogh: Of Wheat Fields and Clouded Skies”. This event was shown in Sedona on Wednesday, Feb. 13 at 4 and 7 p.m. at the festival’s Mary D. Fisher Theatre. Great Art on Screen is a series of seven documentaries featuring an in-depth look at the most extraordinary and groundbreaking art masters of their time. Take a fresh look at Van Gogh through the legacy of the greatest private collector of the Dutch artist’s work: Helene Kröller-Müller (1869-1939), one of the first to recognize the genius of Van Gogh. In the early 20th century, Kröller-Müller amassed nearly 300 of Van Gogh’s paintings and drawings now housed at her namesake museum in Holland. The Basilica Palladina exhibition in Vicenza, “Amid Wheat Fields and Clouded Skies,” with 40 paintings and 85 drawings on loan from the Kröller-Müller Museum, lends the basis of this program, revealing Van Gogh’s art and his genius, while allowing audiences to understand the importance of drawing as part of his craft. Van Gogh’s seemingly instinctive canvases were the result of long, preparatory studies very rarely exhibited – not just sketches but stunning works of art in and of themselves, where the broken flow of lines that characterize the style and strokes in Van Gogh’s paintings can already be seen.
From the Sedona Film Festival web page.
https://sedonafilmfestival.com/event/van-gogh-of-wheat-fields-and-clouded-skies/2019-02-13/

The music for this film was composed by Italian born composer Remo Anzovino, it is a soundtrack that is sublimely beautiful and alluring, the Maestro creating wonderfully lyrical musical poems that not only enhance the images on screen but also bring a sense of emotion and poignancy to the proceedings. His music gives the artistry and stunning imagery as created by the master even greater life and vibrancy, the musical score purveys an aura of vulnerability, fragility and also weaves an intricate and compelling musical web, that itself could be seen as a brush of sorts that is applying colour, depth and textures to a blank canvas. The composer utilising solo piano and strings that at times soar or entwine to bring to fruition a heartfelt and highly emotional result, the themes the composer has written seem to surround the listener and are affecting as well as effective in the context of the film. The style is at times classical but there is also present a slightly more contemporary sound which although is fleeting proves to be attractive and emotionally powerful. Emotive and poignant with touches of splendour and melancholy describe this work. The piano performances are haunting and mesmerising and verge upon the achingly touching. There is also accordion which seems to fade in and out of cues adding even more atmosphere to the score. The instrument being given centre stage in a handful of cues, LOVING PEOPLE being one of them.
ARLES SYMPHONY is a personal favourite of mine from the score, it has subdued but at the same time driving strings that are a background to more strings which perform the central melody, this is also enhanced by use of percussion and punctuated by Accordion, it is an energetic and vibrant piece which I know will be returned to by many listeners. It is however the piano performances within the score that tantalise and hypnotise, overall this is a recording you should own and I recommend it without reservation. The composer has worked on numerous projects all of varying genres, he has been particularly successful in re scoring silent movies and is known for his film scores, sound design and music for theatre. His music for VAN GOGH OF WHEAT FIELDS AND CLOUDED SKIES is a masterful work has affiliation’s to and evokes the styles and sounds as created by the likes of Morricone, Bacalov, Frisina and at times Vangelis. The soundtrack will be released on Sony music. Also check out his soundtracks for, WATER LILLIES-MONET-THE MAGIC OF WATER AND LIGHT and  HITLER VS PICASSO AND OTHERS.