As you all are aware, I am a huge fan of the Italian western, and also an even bigger fan of the music from this genre. However, there are a few examples of the genre that I am not shall we say bowled over by, these are mainly the handful of comedy westerns that were produced by Italian film makers and also scored by Italian composers, I think we the exception of the TRINITY movies (well the first two at least) there are really no other comedy westerns per say that I am that keen on, I feel that the genre as a whole contains comedy but it is normally of the darker variety, which in movies such as THE BIG GUNDOWN, SABATA, THE BOUNTY HUNTERS and also the DOLLAR trilogy, is fine. But a film that is a comedy within this genre maybe lost its way a little, mainly due to scenarios and one liners or punch lines that are delivered in Italian do at times fall flat when being translated into other languages especially English. It is I suppose all about the way in which something funny is perceived in different countries, for example American humour is shall we say an acquired taste, unless of course you are American. Also, British comedy too can fall flat when seen outside of the UK. So, it is not something that is confined to the Italian western. There have been a few comedy westerns within the Italian western collective and don’t get me wrong I have seen them and I suppose found them fairly enjoyable, but it’s not a sub- genre within the Spaghetti western that I would go out of my way to watch, such as the Zapata westerns etc.

One movie within the COMEDY collection is ALIVE BUT PREFERABLY DEAD, although it had quite a good plot and had an impressive cast I still cannot get excited or enthused about it, directed by Duccio Tessari in 1969, the film contained a somewhat energetic soundtrack courtesy of composer Gianni Ferrio, now Ferrio in my opinion was a fine composer and worked on numerous westerns as well as literally hundreds of other types of movies. What I liked about Ferrio when he scored a western was that he did’nt necessarily stay within the boundaries that had become known as the ITALIAN WESTERN SOUND, and like his fellow Italian Piero Piccioni utilised jazz at times within his western scores, which in most cases was effective and added another dimension to the films he was working on, but Ferrio also created a western sound that I consider to be all of his own, fusing jazz passages with grand orchestral pieces as well as at times employing whistling and maybe the odd cracking rifle butt sound on occasion. One only has to take a listen to his. FIND A PLACE TO DIE score, to hear that he was an innovative and inventive Maestro. His score for ALIVE BUT PREFERABLY DEAD was not solely orchestral, as it contained several songs, which basically told the story as it was being acted out on screen.

The soundtrack was originally released in 1969 on a CAM LP record ,(sag 9023) I remember at the time buying it just because of FIND A PLACE TO DIE and SENTENZA DI MORTE which is another western score by Ferrio, and with a title like ALIVE BUT PREFERABLY DEAD it was bound to be good, wasn’t it? Well its not actualy a bad soundtrack, but for me the use of kazoo’s in anything kind of take the edge off a little. However, I skipped over the vocal tracks and the actual music from Ferrio was essentially very good for a comedy score, foxtrots, galloping tracks and fast paced comedic sounding pieces were heard between the songs, which made it bearable Just! A few years later in the 1990’s CAM re-released the soundtrack on a compact disc, as part of their SOUNDTRACK ENCYCLOPEDIA alas no extra tracks were forthcoming and it was a straight re-issue of the LP. 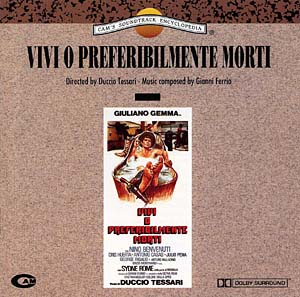 Then CAM re-issued it once again and it was one of three western scores by Ferrio on one disc, the other two being UN DOLLARO BUCATO and SENTENZA DI MORTE.

Then Digit movies in Italy re-released the score in 2013 with ten extra cues, but of course some of these were vocals, let us say that Ferrio served up a nice mix of styles, the songs being performed by THE WILDER BROTHERS, were country sounding, with guitar and hoe down sounding fiddle featuring large. Ferrio’s soundtrack was vibrant and robust and had amore American flavoured sound within it rather than spaghetti. But a classic spaghetti score it cannot be filed under, I am however pleased it is available in a fuller edition. Plus, recently Digit-Movies also re-released SENTENZA DI MORTE with extra cues, which is certainly worth having even if its just for the title song, THE LAST GAME performed by Neville Cameron and a rather upbeat track entitled HOT MEXICO which contains a very nice guitar solo. Check out ALIVE BUT PREFERABLY DEAD, as it is packaged well and has great sound quality. I however prefer the more conventional Italian western score, if there is such a thing, that is.