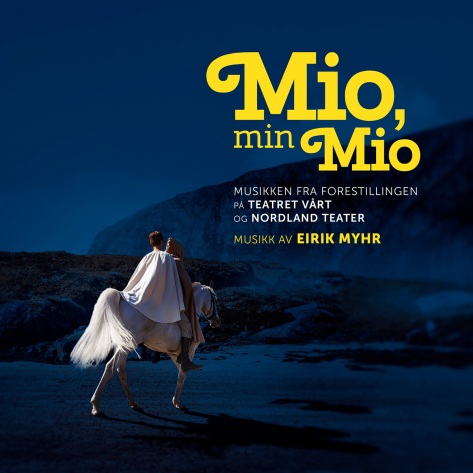 We very often forget that composers that work in film etc also work in the theatre and provide stage productions with original scores, I admit to only reviewing a handful of such scores, and I hope to rectify this. I was sent this week two scores for theatre and one soundtrack for a radio production. All three are the work of Norwegian composer Eirik Myhr. The first score I listened to was MIO, MIN MIO, which is a beautifully written and performed score ,hearing the music has made me want to go and see the production on stage, because to be honest if the music is this good then the production itself must be outstanding, plus I want to see how the music and the production interact and how the music supports it. There are so many themes within this work, all of which are fresh, vibrant and wonderfully melodic. The composer I think uses a fusion of symphonic and electronic for this soundtrack. I say I think because I cannot be 100 percent certain of the percentage of symphonic and synthetic as the sound is so good. But there are definitely some sections that are executed synthetically, however, all that matters is that the music is effective and supportive of the production and of course it sounds great. Strings are utilised to great effect with faraway sounding horns acting as a background and support to embellish and enhance further the effectiveness of the strings, which emphasises the beauty and haunting quality of the music. It is a grandiose sounding work in places, and it has for me the goose bump effect when it at times peaks with a gloriously romantic theme. I have to say I returned to the score three times after my initial listen. The only thing that is a negative is that it is only twenty-eight minutes long, but as they say less is more and this is certainly fitting into that category, but of course that does mean you can start all over again which is not a bad thing.

The eloquent and vibrant themes ooze quality and a rich and alluring aura, they can at times be highly dramatic. and purvey an atmosphere of apprehension and darkness. But, are mostly filled with a delicate and fragile persona, that is pleasing and also soothing. As I say I have not really taken a lot of notice of scores for stage productions, but after taking a listen to this I think maybe I should start to sit up and pay attention. Especially for tracks such as RIDDER KATOS BORG, which is a powerful and rousing piece where the composer employs driving percussion laced with urgent and strident strings, whilst also introducing choral elements and melodious string flourishes. The score is inventive and entertaining and relays an atmosphere of adventure and excitement in every note. Recommended.