For every person that goes missing, there has to be a story, there has to be a reason why they disappear, are they taken away by someone or something or do they themselves decide to just disappear? Each person has their own story and there must be a reason for every disappearance, I suppose its just getting to the facts and discovering the whys and the where for’s that are specific to each individual.

In 1974 a beautiful young bank teller went missing after a bank robbery which took place in Smithsville, Texas. Francis Wetherbee is the subject of the movie THE TELLER AND THE TRUTH which was directed by film maker Andrew Shapter. Wetherbee’s car was found submerged in the river, did she drown, did she commit suicide, or could she have been kidnapped? Or maybe she is alive and well somewhere, but where? And why did she disappear? The film explores every possible event and converts the disappearance of a young girl in a small town into a worldwide search to see if she could still be alive. The subject matter is certainly tense and harrowing enough, but add to this fascinating and thorough search on film a low key but at the same time melodic and affecting score that is provided by composer Carl Thiel, and you have a winning formula, the music takes the events on screen to another level and also the music does have a life of its own away from the movie.

Yes, it is sombre, yes, it is tense, and at times can be a little jumpy and surprising. But, it is effective and entertaining, this is a brooding and well written score, the composer utilising to great effect, percussive elements, strings and piano in the main, which are punctuated and underlined by the use of brass albeit subtle in most places, the combination of this instrumentation is a seductive and smouldering fusion that the composer has fashioned, which occasionally does build into a more developed and driving sound, but for the most part it is the dark and shadowy persona which seems to lurk in the background that is the simple but also alluring element here. There is also a sentimental or sense of melancholy purveyed in certain tracks, and the composer introduces a lilting violin solo on occasion which is heart rending and in tracks such as DAD LEAVES HOME and FRANCIS’S JOURNEY one can hear the emotion and the poignancy, there is a sound and a style that I think can be compared to that of composer Bill Conti, here and also there are maybe a few gentle nods to the artistry and thematic writing of John Barry and the minimal musical approach of Thomas Newman but that is just a personal observation. This is I think a score that will be enjoyed by anyone who encounters it, and after the initial listen they will return to it to savour and listen again and again and realise that it is an example of brilliant writing.

Another animated series, with a score that is just so good that you will have to add it to your collection as soon as possible. The musical score for SEIS MANOS is the work of composer Carl Thiel, (SPY KIDS, ALL THE TIME IN THE WORLD, THE TELLER AND THE TRUTH) who right from the offset starts to create an upbeat and infectious sound. One just gets the feeling that this is going to be something pretty special, as you all know I am a great fan of Italian western scores and I was really pleased to hear a kind of spaghetti influence with the opening theme from this Mexican Manga series. It is an influence that also continues within some of the other compositions on the score. In fact I think I am correct when I say that the composer pays homage to a few composers within the soundtrack, as I have said there is Italian western sounds, plus one can hear references to maybe Lalo Shcifrin, and certainly Alan Silvestri in the action cues, but there is also an original and interesting sound present, which can only be the musical fingerprint of Thiel himself. The score is an action led work, with a scattering of Mexican flavoured songs and mariachi sounding pieces, that are interspersed with fast paced high octane cues and at times lilting melodies that lean towards an oriental sound as in track number, seven, BE A FLOWER, BE NOTHING, which features the flawless playing of composer/cellist Tina Guo (who also features in a number of the other cues) and also I think did actually compose this particular track, which I am sure Jerry Goldsmith would have been proud of as we all know he was a master at creating this style and sound. SEIS MANOS is a score that is just so entertaining and that is away from the images it was intended to enhance. The composer utilises bold brass and pounding percussive elements which are enhanced further via the use of the string section and breathy woods, it is for the most part a relentless work, and one too that has to it a vibrant theme laden content. Even in the most fast paced and energetic sounding piece on the score, we still hear a core theme of some sort that remains melodic throughout. Track number nine VIETNAM FLASHBACK is wonderfully apprehensive initially, but gradually builds and soon alters in direction from down beat to upbeat and a little frenzied with strings and brass combining with percussion to create a near Bond like bombastic sound. The composer also utilises choral elements from time to time which purveys an atmosphere that is grandiose and imposing. I would say that this like many scores these days is a fusion of both symphonic and synthetic, with Thiel employing and putting to good effect electronic instrumentation, track number twelve, ASALTO EN LA CARCEL for example, is certainly synthetic, but at the same time rhythmic and effective. I cannot do anything but recommend this score to you and urge you to go and buy it TODAY….and whilst you are there check out his SPY KIDS 4,ALL THE TIME IN THE WORLD, and ponder could we be hearing a possible Bond composer? 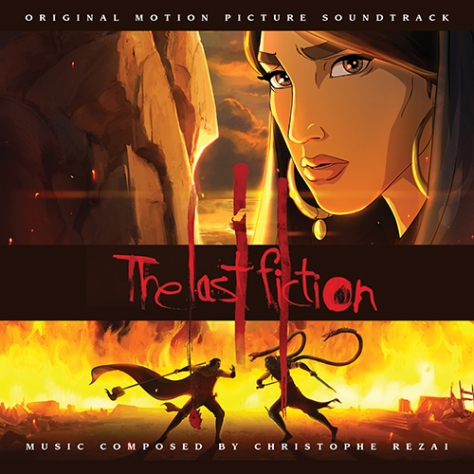 Released on Movie Score Media, THE LAST FICTION, is without any doubt an interesting and innovative score, composer Christophe Rezai has incorporated many Iranian folk songs and elevated these into rich symphonic themes, that support and enhance this already imposing and powerful animated feature. It is a work that is literally filled with a richness of melody and a driving and commanding array of both atonal and theme laden compositions. The composer has re-imagined and given new life to numerous Iranian folk songs and music. Incorporating these into the score took a lengthy and detailed period of research into the traditional music of Iran, the composer at times converting the folk sounds into choral works that are haunting, celestial and enthralling. The film takes it inspiration from the classic THE BOOK OF KINGS by Ferdowsi, which follows the stories of two central characters, Prince Zahak who in league with the devil makes his ascension to the throne of Ancient Persia and also the hero of the story Afaridoun, who is the only one who can stand against evil and save the people in the Kingdom from the clutches of darkness and evil. The film is a masterpiece of animation and of story telling and is helped greatly by a pulsating and rhythmic soundtrack, which embellishes and enhances the story that is unfolding upon screen, the score is not just a background to the story but as the film progresses the music develops and becomes an integral part of the film. The French born, but now Tehran based composer, has worked on numerous television projects, and has also scored a handful of motion pictures, for directors such as Dariush Mehrjui, Mani Haghighi and Shahram Mokri, I think will be sought after by many when this movie is more widely seen. There are pieces within the score that are grandiose and fully dramatic, which have to them an imposing and exciting persona, and then we are treated to many choral passages which range from being fragile and soothing to complex and foreboding. The composer at one-point incorporated elements of Zar Music into the score, which are based upon a traditional Persian exorcism ceremony which is still practised in parts of southern Iran. The composer at times also employs a more contemporary sound, which is heavy on the percussion with fuzzy electric guitar scratching out a rock orientated composition, but even this is punctuated and further embellished via driving low strings that bring a more urgent and fearful aura to the proceedings. The components that Rezai has utilised and cleverly woven into the fabric of his score go to make up an interesting and groundbreakingly innovative work and is certainly a score that you should take a listen to. It combines the ancient and traditional with the symphonic and contemporary  and Eastern musical influences with western orchestration. The  result is a stunning work. Recommended.