More film music excellence released on the Movie Score Media label, this time in the form of the score to the movie TORPEDO by composer Hannes De Maeyer. This is a surprisingly mature sounding work that has its roots firmly planted in the silver age of film music. By this I mean that is a score that has an abundance of thematic action cues just like we used to get from composers such as Elmer Bernstein and Jerry Goldsmith when they scored war movies. Being an action themed work one would think it would be full on high octane largely atonal music that we are going to be hearing, and although there are a handful of passages within the score that could be described as atonal or non-thematic, for the most part we are as listeners and film music fans treated and spoilt because the composer serves up not only a wonderfully effective score for the movie, but also a soundtrack that we can sit and savour which evokes the music of great war movies from years back. The work is an accomplished one, and literally oozes excellently constructed martial moments that are in my opinion on a par with marches or themes from films such as TOO LATE THE HERO, THE GREAT ESCAPE and VON RYANS EXPRESS, so that’s the level of quality we are dealing with here. The composer utilising percussion, brass and strings to great effect fashioning memorable musical moments that will I am sure become embedded in the memory of the many film music connoisseurs that will be sampling the score. The film TORPEDO is more than a war movie, it is an adventure yarn in which we see a group of resistance fighters capture a German U Boat and transport Uranium from the Belgian Congo to New York. The music punctuates and underlines the many tense and exciting moments within the movie, but the thing is it also stands on its own as just music, well for a film music fan it does any way, as I say it evokes the music of past war story movies, and maintains a high level of nervous tension throughout, keeping it fresh and vibrantly attractive at all times. Thundering timpani acts as a foundation for a number of the cues, these are laced with strings and given greater stature by brass and percussion that adds a driving and theme laden persona to the proceedings. It sounds big, brassy and commanding, so what are you waiting for?  This is definitely one you should check out, available on digital platforms, but at this time again no CD, which is something that seems to be happening a lot recently, this score however deserves a compact disc release so come on Kronos, quartet or even Perseverance, time to step up. Please….Whilst you are sampling the many attributes of TORPEDO why not also check out the composers sweeping and eloquent score for IMMENHOF/DAS ABENTEUER EINES SOMMERS. Which is available on Alhambra records and also digitally. 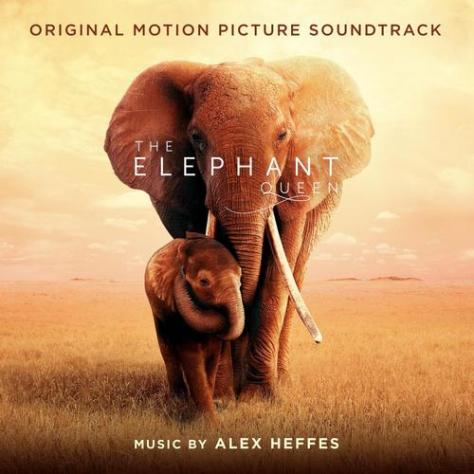 THE ELEPHANT QUEEN is a film about loss, love and courage but seen within a herd of Elephants that have to make a journey across the African savannah after they are forced to leave their Waterhole. It is down to the Queen of the herd to lead them, re-assure them and get them through the arduous and fretful journey. Narrated by Chiwetel Ejiofor, it is a story that will engage and involve the watching audience and have them crying as well as applauding the animals as they take this epic journey. The film is aided greatly by a fitting and highly emotive musical score which is the work of composer Alex Heffes, who in my opinion is one of the most talented music-smiths in film and TV music around at the moment. It is sad at times that a talent such as this is often, not ignored but how can I put it, yes Overlooked by collectors. His scores have a lasting quality to them, and he is consistent in producing scores that support and give greater life and depth to every project he works on. He has more talent in one of his little fingers than many other composers I could mention (but I will not). His music also has an appeal to it that gives it a life away from the film or TV show it was written for. THE ELEPHANT QUEEN is no exception to this rule, it is a score that is refreshing and vibrant, the composer at times utilising African voices to give it a greater depth and authenticity. But he also makes effective use of the conventional line up of instrumentation as in Strings, woods, percussion etc. It is an exhilarating and wonderfully entertaining work, which I have to say will keep the listener occupied and entertained throughout it running time. He incorporates musical references and gentle nods to music that is from other genres of film, such as the western film in the cue, BEETLE SHOWDOWN, in which he puts to effective use trumpet to open the cue, then it segues into a kind of madcap chase theme but still retains a western music flavour. Given the subject matter there is also music that will inevitably tug at ones heartstrings, TRUNK GREETING for example, in which the composer writes a beautifully poignant theme which is performed on solo piano underlined by soft and warm sounding strings, which give it an aura that oozes melancholy. This type of scoring is also evident in A MOTHERS ENCOURAGEMENT, piano again but this time woodwind enhances and underlines the central theme which too is further enhanced via subdued strings, the result is simply stunning and affecting. I like this score a lot, it is well written and has to it an alluring and theme laden persona. It purveys a richness and also an underlying apprehensive element, which in turn gives way to a subtle but at the same time powerful musical heart. There is joy, sadness and a sense of hope within this score. A score that in my opinion is at times Barry-esque in places.  One for you to check out, no CD at the moment, but we live in hope.