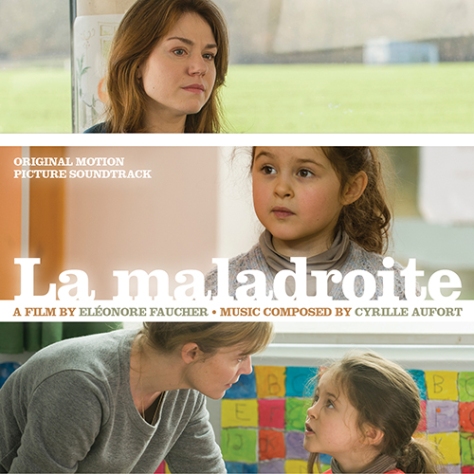 Composer Cyrille Aufort is for me probably one of the most original and talented film music composers around today. His scores are always innovative and never seem to follow a predictable musical path. What I mean by this is that Aufort in my eyes continues to surprise and delight with each new work, his music adds depth and a greater emotion and dimension to each film or TV project he works upon. The composers scores becoming an unseen character within a movie, underlining and enhancing the proceedings and giving support to storylines and scenarios. His score for the movie LA MALADROITE which premiered on French TV recently has been released on Movie Score Media digitally, and one does hope that soon a record label will pick this up for a physical CD release as it is a score that deserves such a release. The film deals with a subject matter that is delicate and also highly emotional, and the composer accompanies and gives a greater impact to the situations as they unfold within the movie. The music is based upon a lilting piano theme on which Aufort builds his poignant and superbly subtle and sympathetic soundtrack. I think this for me personally has already become my favourite Aufort score and will also be a firm favourite of mine when I compile my best of 2019 list. The film is based upon true events, which are at times upsetting and at the same time fill one with a sense of anger. The touching and subtle tone poems of the composer do give the storyline more power as we all realise what is happening, but I suppose do not want our assumptions to become reality although inevitably they become clear. Stella is 6 years old but is going to, school for the first time. Happy, exuberant – a little too energetic perhaps – she is a charming and endearing child, but soon begins to have a lot of time off from school. Ill health problems are justified by her parents, and when her teacher discovers bruises on her body, the little girl tells her they were caused by her own clumsiness when she explains she has fallen. But is she telling her teacher the truth? The teacher enlists the aid of others who too meet Stella and try and decide if these injuries are due to her falling or are, they abuse from the parents or someone else. The teacher Céline begins to take note of the injuries until without any warning the family move away.

As I have already said it is a film that deals with a delicate subject, but sadly one that is all to common now. Aufort’s atmospheric and at times mesmerising score, is an asset to the movie, the composer adding colour and shading to the storyline as it develops. The childlike and delicate central theme becomes haunting and even more beautiful as the score develops and grows. It is one of those soundtracks that has to it an abundance of poignant and emotive thematic material, that is overflows and at the same time overwhelms because it is just so affecting and beautifully powerful. Please I urge you to listen to this score, and when the CD is finally released add it your collection, available on various digital platforms, highly recommended.