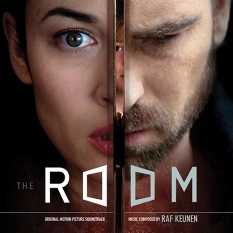 I love the cello, it is an instrument that has so much heart and conveys an array of emotions, It can be sombre and dark, romantic and light and can and often does bring a tear to the eye of many when used in certain situations and scenarios in film. The score for THE ROOM by Raf Kuenen is a good example of the effectiveness of the instrument and the way that it can create and fashion a great many moods and conjure up atmospheres that linger and affect. THE ROOM is a sci-fi thriller and the majority of the score is synthetic and for the most part atonal, the composer realising dark and sinister soundscapes, but within these at times ominous sounding passages we are treated to little ripples of respite in the form of heart rending and sorrowful cello, fragmented and delicate piano, charming otherworldly shimmers and melancholy which is purveyed beneath a veil of sinister sounding effects via piano and cello. At times I was reminded of the work of composer Christopher Young in the HELLRAISER movies, where there is an undeniably fearsome persona present, but still in the background or underneath the malevolent atmospheres there is the sound of hope and respite in the form of a lilting melody that although is overpowered by the dark forces is still managing to be heard. THE ROOM is a masterful work that oozes fearful sounds that are musical and otherwise, it is at times a difficult listen, with its harsh and jagged crashes and slices, but the melodic content shines through to give us an interesting and enriching work. The other score released tat this time by Raf Kuenen, is THE SPY which like THE ROOM is released digitally on Movie Score Media. I do like it when a composer has two scores released so close together and especially when they are from two different types of movies, Why? well it displays the versatility of the composer and also their flexibility and ability to create varying moods and sounds. THE SPY is totally removed from THE ROOM both in the genre sense and musically, the composer on this occasion provided us with a more thematic score, and also one that is I would say more symphonic in its overall musical make up. This time the composer utilising a more symphonic approach, with the use of strings, solo violin and piano, yes, there are passages of music that are realised via electronic means, but the two mediums as in symphonic and synthetic are fused together seamlessly and compliment and support each other throughout, So two scores from different genres which both work effectively and are worth checking out.