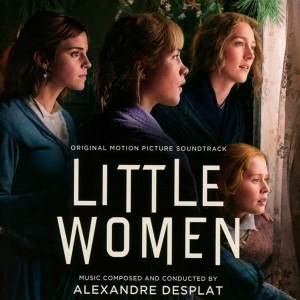 The delicate artistry of composer Alexandre Desplat has always intrigued me, his scores always it seems contain so many beautiful themes and are crafted with what seems to be lovingly, each cue and every nuance containing something that will tantalise and infiltrate the emotions of any listener. One of his latest assignments LITTLE WOMEN is no exception and I would go as far as to say it is probably one of his best scores for at least three years. It contains wonderfully fragile and intimate sounding pieces in which the composer utilises strings and the light touch of a solo piano performance. In fact I would say that the score itself is built around the piano, Desplat laying the intricate but at the same time strong foundations of his work down via the instrument, and then adding strings and woods to create harmonious and melancholy sounding passages that are attractively entertaining, and contain subdued melodies that linger in ones mind long after they have departed. I have always remarked that Desplat is not a new Delerue as there could never be another, but he is in many ways an extension of the music that Delerue had created, or at least the style that we all associate with him. Desplat has as we all know worked on some of the most popular movies that have hit the cinema screens in recent years, and with each assignment and each project, his music seems to become more mature and even more attractive, if that is at all possible. LITTLE WOMEN is a story that has been committed to film on a number of occasions, and each time the score has always been a memorable one. Desplat I think goes even further with his soundtrack for the story as the music kind of becomes intertwined with the story line in a more personal way, in fact his music could even be described as an additional character, as it is so supportive but at the same never swamps the story being acted out and is inconspicuous but supportive. The composers light and airy sound is a joy and like a breath of fresh air, the lilting melodies and alluring compositions adding much to the production. A delight to listen to on its own, as well as hearing or not hearing it within the movie.  Most certainly one for your collection.