During the 1950’s and 1960’s actor Charlton Heston, was, mainly associated with the epic movie, he had starring roles in movies such as BEN HUR, THE 10 COMMANDMENTS, EL CID and THE WAR LORD. The actor portrayed many important figures from history, these included General Gordon in KHARTOUM and Michelangelo in THE AGONY AND THE ECSTACY. As the sixties progressed Heston took on the starring role in THE PLANET OF THE APES, which proved to be an iconic piece of cinema, the actor reprising his role as the astronaut Taylor in BENEATH THE PLANET OF THE APES, but his performance in this movie was not a major one. As the 1970.s dawned producers and directors looked to Heston to portray characters in sci-fi movies, two which come to mind are SOYLENT GREEN and one of my favourites, THE OMEGA MAN. Heston also played central characters in movies such as WILL PENNY and MAJOR DUNDEE plus in later movies took on important roles in films such as EARTHQUAKE and THE TOWERING INFERNO. Of course, he was a familiar face to cinema audiences via his roles in motion pictures such as THE BIG COUNTRY, 55 DAYS AT PEKING, THE BUCCANEER and TOUCH OF EVIL. And later would become gainfully employed as a voice over artist for various animated features and documentaries, as well as performing Shakespeare on stage and in movies such as JULIUS CEASAR portraying Mark Anthony. But it is THE OMEGA MAN I intend to focus on for this piece or to be more precise the musical score for the movie, which was penned by British composer Ron Grainer. The composer was already known to audiences through his now classic theme tune for the television series DR. WHO and his equally appealing MAIGRET theme also for British TV. But it was a little unusual for a composer who was mainly known for his work in TV and based in England to work on an American production in those days. 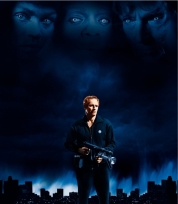 However, Grainer’s atmospheric and symphonic/pop sounding music worked well with the storyline and the images on screen, the composers use of organ in-particular was striking and gave the movie greater depth and created an eerie atmosphere that became the motif for the infamous Family. It was also perfect for the various action sequences and underlined the more spooky sections to great effect. As soon as the movie was released and fans heard Grainer’s haunting score, they began to request that the soundtrack should be released, sadly it was not forthcoming and they would have to wait many years before the score eventually got a release on compact disc by film score monthly, the original release soon sold out and a re-press followed a little later. Which too, soon became sought after and is now a rare release changing hands on the internet for inflated prices.

Grainers score was a revelation for me when I first saw the movie, but I had already sampled his musical wares through Doctor Who and also the TV series THE PRISONER which was popular in the late 1960.s. In fact one could hear elements and certain nuances and orchestration traits within THE OMEGA MAN that the composer had experimented with in the theme and a number of the scores for THE PRISONER. THE OMEGA MAN was released in 1971, and it was based upon the book I AM LEGEND by author Richard Matheson, and was the second time that Matheson’s futuristic Zombie/Vampiric like story had been committed to celluloid, The first version was entitled THE LAST MAN ON EARTH in 1964 which starred Vincent Price. In recent years it has been given a more contemporary setting in the Will Smith version, but I think that THE OMEGA MAN is still the best purveyance of Matheson’s tale. So, back to Grainer’s revered and popular score, the album opens with the familiar strains of A SUMMER PLACE which Heston’s character is playing on the car radio as he patrols downtown during the hours of daylight.

The easy listening version of A SUMMER PLACE segues into Grainer’s opening music entitled THE OMEGA MAN, which although marginally up-tempo is an apprehensive and subdued theme, strings being supported by percussion and almost straight away the composer bringing into the equation organ that gives the piece a sinister and unsettling aura and also gives the audience a hint of a theme that will be expanded upon later in the proceedings. Track three SURPRISE PARTY is a more upbeat and action led cue, Grainer again employing organ and underlining it with percussion and brass to add a more urgent mood. The composer also provided the movie with a lot of jazz infused cues, which most of the time acted as source music or background music to the love scene etc. In many ways THE OMEGA MAN belonged to the many TV movies that were being produced at the time of its release, it had that style of direction and also was similar in appearance as in the cinematography as many TV movies dealing with sci-fi or horror that were being produced at the time. Grainer’s music certainly aided the production greatly, and made it stand out from anything else.

The score is wonderfully thematic and powerfully affecting and when watching the film one cannot help notice what a great job the music is doing to enhance the action on screen and to highlight key moments within the movie, in fact without the score I for one do not think the film would have been as memorable. The composers searing strings and ominous sounding brass are stunning within the context of the movie and also have stood the test of time well, the music to is easily savoured as just a collection of themes without the need for a film, they are vibrant and haunting in both a dark and pleasing way. If you have never heard this I urge you to rectify that mistake NOW.