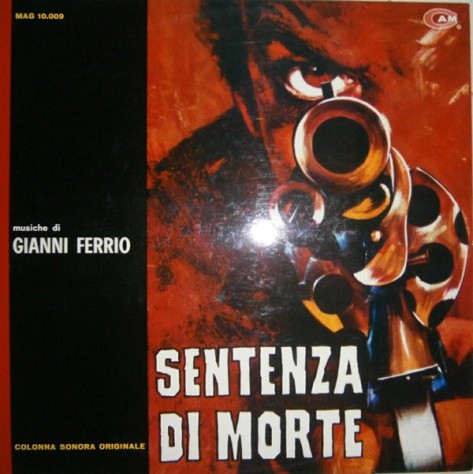 I recently wrote the notes for a five compact disc set entitled ART FILM MUSIC, in fact my notes gave the collection its title as I called my essay THE ART OF FILM MUSIC, and writing music for film is certainly an art, a craft and a precise and delicately balanced contribution to the film making process, we as collectors of film music appreciate this and also the discipline of the composer when scoring a motion picture, whatever the genre, the music has to be in tune with what is occurring on screen and enhance and support without taking anything away from the storyline or a specific scene, the score must ingratiate and bolster without actualy being heard, it is an unseen actor an invisible component within a finely balanced process, it can add depth, create atmosphere and also has the ability to make or break a moment within a movie. But today I am not writing about the music but the art of the soundtrack, the illustrations or the images that are used on soundtrack releases, these at times eye arresting illustrations can actually sell the soundtrack release without the collector ever having heard the score or even seen the movie. The colourful images call to the collector and entice them into picking up the release, a release that could be an LP record, a picture cover single record a CD or even going back a few years a cassette or an eight track. In my early days of collecting which was during the 1960.s I would often browse through the racks of soundtracks in places such as SOUNDTRACK or HARLEQUIN RECORDS and even 58 DEAN STREET, and buy a soundtrack based on three things, the composer, the genre and the art work. For example in the mid sixties the Spaghetti western had come into its own and thanks to shops in London the soundtrack albums from these quirky sagas were filtering their way into retail outlets, for example, A MAN A HORSE AND A GUN by Stelvio Cipriani, now this is a prime example of me personally buying the LP because of the genre and the art work, the vibrant colours and the vivid art work just reached out to me, as did SENTENZA DI MORTE by Gianni Ferrio another western, which had striking art work. I had heard of both the composers for these scores, but it was the art-work in the end that convinced me I should buy them.

There have been occasions I have purchased something because I liked the art work and on listening to the music have been somewhat disappointed, but thankfully this never happened a great deal especially with Italian releases.

But the art work on American and UK releases too had an alluring effect, items such as CUSTER OF THE WEST, KRAKATOA EAST OF JAVA, THE BLUE MAX, DUEL AT DIABLO, WILL PENNY they all had attractive art and held a certain hypnotic quality to them.

The British release of soundtracks such as FAR FROM THE MADDING CROWD, THOSE MAGNIFICENT MEN IN THEIR FLYING MACHINES etc, too fixated one when browsing through the racks of soundtracks. I remember seeing the cover for SUNFLOWER for first time, it was stunning and another Mancini MASTER OF THE ISLANDS or THE HAWIANS, too made one linger when you first saw it. 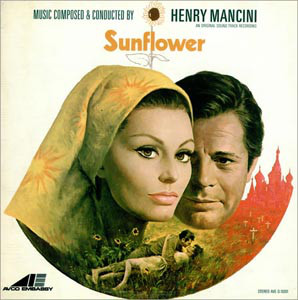 Art work I think did suffer slightly in the 1980’s and also into the 1990’s there were not so many interesting covers, maybe this was due to the rise in the popularity of the compact disc, record labels not having the space as they did on albums as in LP releases. So the golden age of art for the soundtrack release was probably the 1960’s with a few exceptions that were released in the 1970’s. I suppose its impossible to do a thorough article on this subject, because soundtracks released in the United States would often have a different cover to the same score that was issued in France or the UK and then the Japanese release normally blew everyone away because of the way it was presented. A Japanese release would almost certainly have superior art-work and in 99 percent of cases also have better sound quality.

The re-issue of 55 DAYS AT PEKING for example had a great front cover and was issued on LP in a gatefold edition in Japan with crisp and full stereo sound, there were two re-issues of the score in Japan one on Columbia Nippon the other on Sony. They both used the original CBS LP cover art but enhanced it and brought out the colours more giving it a bright and attractive appearance.

The Japanese labels such as KING and TOHO also released a number of Italian western scores, one being SABATA, again striking art work, but this time using photographs of Lee Van Cleef and William Berger who played the two central characters in the movie.

But I still have to champion the Italian soundtrack releases for their stand out art work, CAM Records in-particular released a wealth of soundtracks that contained stunning art work, WATERLOO for example by Nino Rota the CAM release of this on LP and later on CD had far superior art work to the Paramount LP record which was released in the UK in 1970. Ariete records another small Italian label made their mark with striking soundtrack covers, THE FIVE MAN ARMY and THEY CALL ME TRINITY being just two of them.

BEAT records too had their moments, at times utilising very modern art to illustrate their soundtrack covers, many of which were re-produced on the CD reissues of the original soundtrack releases. One genre or at least one collection of films which I felt could have done better in the art department, was the JAMES BOND franchise, Dr No was quite a plain cover, as was FROM RUSSIA WITH LOVE both relying on stills from the movies to adorn the soundtrack cover. GOLDFINGER too was a little, well shall we say predictable. THUNDERBALL however contained some nice art work, which differed in the USA and the UK but both versions were eye catching.

The UK release of YOU ONLY LIVE TWICE was simple but also affective, a white background with a picture of Sean Connery as Bond just standing centre. As I say simple, but it did the trick. OHMSS was rather flat, but it made up for the front cover with the artists impression of George Lazenby inside the gatefold edition which was released in the UK. 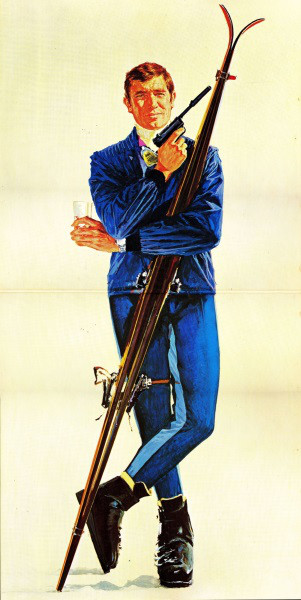 Moving forward a few years, some soundtrack releases which in my opinion contained worthy art-work include. 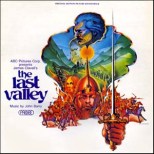 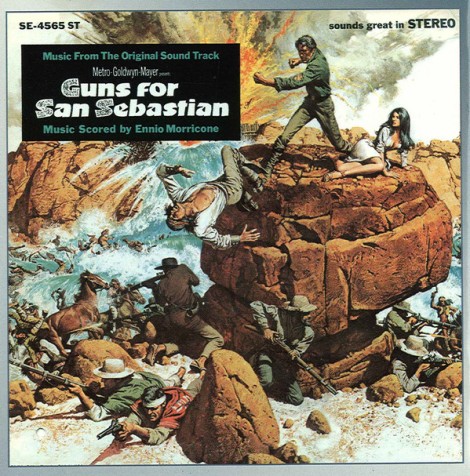 SILENT RUNNING, PATTON LUST FOR GLORY (UK release), STAGECOACH the Jerry Goldsmith score on mainstream or Fontana in UK, THE ADVENTURERS by Antonino Carlos Jobim on Paramount (a score that should get a CD release), CROMWELL on Capitol records, STAR TREK THE MOTION PICTURE on CBS and so many more. In fact, far too many to mention. The art-work for soundtracks is still interesting, but maybe not so exciting or innovative as it was in the past. 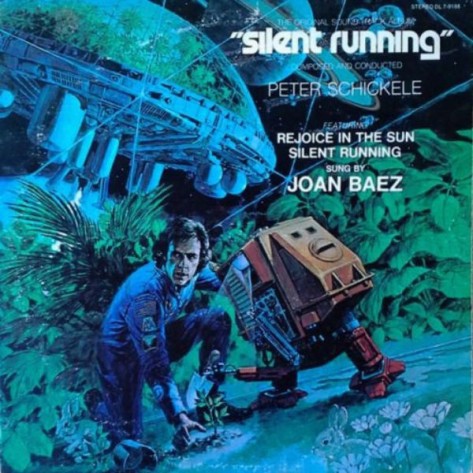