Again I stress that reviews are one persons view a personal opinion, and are in no way correct all of the time, so here is my own personal opinion of the BBC 2020 production of DRACULA, part two  which aired on Thursday January 2nd 2020.

Well after episode one of DRACULA on the BBC new year’s day night if you know what I mean, I kind of vowed not to return to it, well I lied as I had recorded the series, so as I was up late and had nothing to do the next day and really could not sit through MRS BROWNS BOYS or THE SHOPPING SHOW on the other side. I thought ummmm what shall I do? Play monopoly, no it is no fun when you play yourself, Ah,I know, chess, Yes! Umm no actually can’t do that as I remembered I had lost the black Queen about a year ago… Ummm, I know let’s look for the black Queen,,,, no…Lets watch the Grinch, wait stop what am I saying? I give in, Ok, roll DRACULA part two. Now as much as I was unsure and shall I say a tad negative about episode one I still entered into the viewing of part two with a fully open mind and also with some hope that maybe episode two would outshine episode one, let’s face it, It would not have to be that good to even do that would it? (sorry be positive, be positive). Ok lets see whats going on, right Sister Agnes is with Dracula in a walled room looks like a room or even a cell of sorts in castle Dracula, so hang on how did she get there a why is she still alive? The vampire lord surely has not been merciful, No, of course not he is using her in the same way as he used Johnathan, oops sorry Johnny Harker, living off of her blood, feeding on her and all the time he grows stronger and more Bond like in appearance, so Agnes becomes weaker and gaunt in appearance. Is this right?

I think it is, this I think is a good side to the story line or the adaptation, we see the Count becoming healthier and more agile as he drains a victim of the life force blood, and by the same token the victim, becomes more fragile and less able to do things or even think straight, Agnes even loses a chess game because of his hypnotic charms, (hang on chess game, get the black Queen for me and then I can turn this off). However, Sister Agnes is one mean nun and has an iron like resistance against the vampire’s ways. The Count and the Nun sit and face each other across the chess board, at one time one thinks they are actually friends as things are so civilised. The vampire kind of flirting with his female company relating to the Nun what is or what has happened on the voyage, The second episode of the Gatiss and Moffat penned DRACULA is set onboard a ship, and yes we know in Stokers book there was a ship and a voyage from Transylvania to England, in fact to Whitby, where the Count has purchased a residence in the form of Carfax Abbey.

In the book the Count methodically and totally wipes out the crew, in this second episode, it is a little different, and why not its an adaptation after all, the clue being in BASED upon Stokers novel, so that’s how they do it they take a classic horror story and then look at it, take bits out add bits to it and even totally change it, if you had come in mid-way through this episode you would have been forgiven for thinking it was a TV series or show based upon CLUEDO or something that Agatha Christie had cooked up, it was basically a Who Dunnit, but a mystery that was not really a mystery, as we as a viewer have the upper hand as we know who the murderer is.( get the attention of the cast)…..psst….

“It’s the tall dark debonair nobleman in the black cloak, who sits in the dinning room but never eats or drinks, obviously he got a package deal and not fully inclusive”. 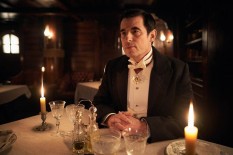 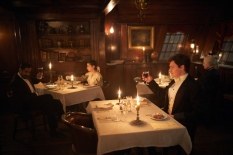 But seriously, the second episode turned into this farcical mystery, filled with people from all walks of life that eventually discover that it is actually Dracula that has gathered them there, and is disposing of them one by one as a kind of dry (forgive the pun) run for when he arrives in England. But things don’t go all the Count’s way, and he eventually is dispatched by burning at the hands of a Van Helsing, (bond theme riff please). Agatha Van Helsing. So, Dracula is set on fire and he dives over the side of the ship into a fog shrouded sea. So double wammy then vampires don’t like water or running water I am told, or is that something from Hammer rather than Stoker, great that’s it then, all done vampire dispatched let’s go! Umm, No hang on a stake wielding minute. That should be it, that should be the end, but we all know its not, because there is still 30 mins to go.

Again seriously, I mean come on guys really. Anyway its ends up with Dracula returning to the ship, in fact he had never left, he dispatches the Captain, the remainder of the crew have escaped in a lifeboat, and then sets about Van Helsing, but unbeknown to the vampire the Captain lives and both him and Agnes have prepared a surprise for the Count in the form of an explosion that will send the ship to the bottom of the sea. Van Helsing and the Captain are dying anyway, so what have they to lose, too late the count realises that Agnes is attempting to distract him, and the ship explodes and sinks, watched by the remaining crew members in the lifeboat. We see Agnes sinking into the depths and also the coffin of Dracula too heading to the seabed. Then the Count emerges from his coffin and walks on the seabed and eventually makes shore, as he looks around he sees the outline of Carfax Abbey, but it is in ruins, then in a surprise move a spotlight is placed upon the Count as cars screech along the beach and stop in front of him lights flashing and helicopters above him, a female walks towards the Count, “Welcome to England Count Dracula, What took you so long”?

It is the familiar figure of Agnes Van Helsing we see, in this twist in the story’s tale. So Gatiss and Moffat have transported Dracula into the present, or at least into a modern-day Whitby. Did you see that coming, no, nor did I. And shades of the end of the Tim Burton version of PLANET OF THE APES. So, Dracula walks among us again, but a word of caution, remember what happened when someone else tried to put the dark lord into a contemporary setting, yes, his reign was short lived.
We will see the outcome tonight my children.

I will mention that the music by David Arnold and Michael Price became more apparent in episode two, and I picked out a few well written and well placed themes. I am looking forward to the release of the score, and also a quick note, the BBC are not the only ones to blame here Netflix too had a hand in it.