The most terrifying thing about THE SWARM is that it is based on Fact: It exists. Fact: It has awesome destructive power. Fact: We don’t know how to stop it.

THE SWARM was released in 1978, it was not exactly one of the best movies released in the decade of the 1970’s but it was fairly entertaining. There were a lot of disaster movies released in the latter part of the 1970’s EARTHQUAKE, THE CASSANDRA CROSSING and THE TOWERING INFERNO etc among them. THE SWARM, like THE CASSANDRA CROSSING, combined the elements of a disaster movie with that of the horror genre but at times I felt it descended into a rather farcical piece of cinema that was hard to take seriously, it was an Irwin Allen production which he also directed. The screenplay by Sterling Silliphant and was based upon the novel of the same name written by Arthur Herzog. The movie was criticised heavily at the time of its release and was a significant failure at the box office for the Warner Brothers studios. Despite having an all star cast that included Henry Fonda, Michael Caine, Richard Widmark, Bradford Dillman, Fred McMurray,  Katherine Ross, Ben Johnson, Lee Grant, Jose Ferrer, Richard Chamberlain and Olivia De Haviland, it still failed to stir up any real enthusiasm amongst cinema going audiences. It did however receive an Oscar nomination for best costume design. 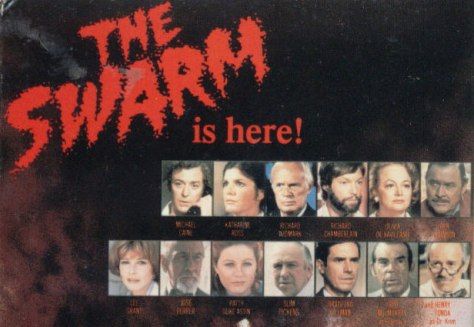 The musical score was by Hollywood movie music giant Jerry Goldsmith. The composer was already well versed in the ways of scoring action thrillers and provided a score that many said was better than the movie it was written for. On listening to the score one will identify straight away the typical Goldsmith approach and style, with at times grandiose and action packed compositions being purveyed via the brass section and accompanied by urgent strings that themselves are supported and embellished by the use of pounding percussive elements, thus creating a tense and powerful sound. Goldsmith employed horns and other brass instrumentation and combined them with dramatic sounding strings to create the sound of the humming bees which was particularly effective in the scenes where we see the swarm descend onto towns and other places where people are. There are also softer moments within the score and the track A GIFT OF FLOWERS evokes past Goldsmith compositions such as A PATCH OF BLUE and the track THE PIPER DREAMS from the OMEN. Originally issued onto an LP and cassette tape which was released on the Warner Brothers label, this however has been long out of print, a re-mastered and expanded version of the soundtrack was issued by Prometheus records on compact disc for the first time in 2002 which contained over 40 minutes of extra music. Now we in 2020 thanks to LA LA LAND records are finally able to listen to the complete score, the recording which also contains several alternate takes and the cues from the LP as well as the actual film score is a complete picture of Goldsmith’s powerful work.

Even listening to this today one can hear the excellence of Goldsmith’s score and hear within it that unmistakable stamp of musical inventiveness and the presence of quality that the composer placed upon each and one of his projects, good or bad. The sound achieved by the composer is a distinct one and even if you are not a devotee of Mr Goldsmith it is a style that is instantly recognisable, and has manifested itself in earlier works such as THE OMEN, RANSOM and THE SAND PEBBLES and again would be displayed in later scores such as U.S. MARSHALLS and SMALL SOLDIERS etc. Disc one of the release contains the film score of which there are thirty cues, disc two containing the album tracks and additional cues. The release comes with a full colour booklet with notes by Jeff Bond. A not to be missed release.