The decade of the 1980’s is an indicator to how popular and how much in demand Ennio Morricone had become 0utside of his native Italy. It is probably during this ten-year period that the composer was to score more non-Italian productions than he had ever done before. Yes, it is true to say that during the 1970’s Morricone did occasionally venture into scoring movies for American directors, but these forays into Hollywood scoring were few and far between. It was said that the composer felt that he was not held in enough regard or under-valued by non-Italian directors, and very often filmmakers outside of Italy had a totally different approach to making movies and also had a different attitude towards music in film. However saying this the 1980’s began with the composer working predominantly of Italian and French productions, early in 1980,

Morricone scored pictures such as IL VIZIETTO ll, THE LADY BANKER, THE GOOD THIEF and STARK SYSTEM, it was not until the year was drawing to a close that the composer worked on movies such as THE ISLAND directed by  Michael Ritchie and WINDOWS from filmmaker Gordon Willis. 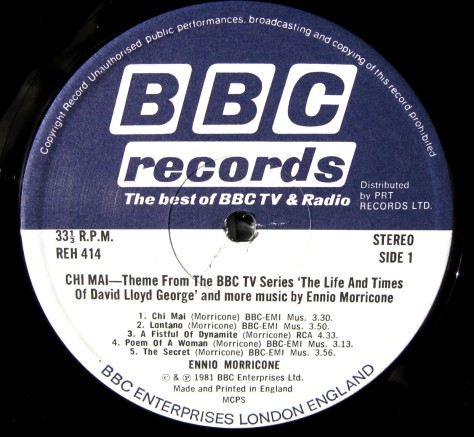 In 1981 his theme CHI MAI became a chart topping single in the UK when it was utilised by the BBC for the TV series THE LIFE AND TIMES OF DAVID Lloyd GEORGE, the theme which was originally from the soundtrack to MADDALENA was released as a single 45rpm on the BBC label and featured a disco sounding arrangement of the central theme from MADDALENA. This would be the first time that Morricone or at least a composition of Morricone’s had entered the chart since the 1960’s when Hugo Montenegro covered his THE GOOD THE BAD AND THE UGLY theme, taking it to the top of the British charts in 1968. 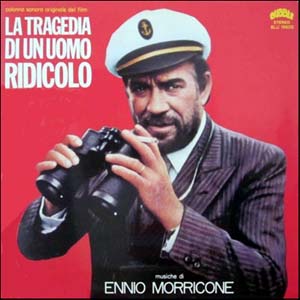 Also in 1981, the composer collaborated with Bernardo Bertolucci on TRADGEDY OF A RIDICULOUS MAN and also with filmmaker, Michele Lupo on BUDDY GOES WEST or OCCHIO ALLA PENNA which was on of the last Italian produced westerns that Morricone would work on, the score was essentially a parody of his past western score triumphs. Il Maestro also collaborated with director Georges Lauter on THE PROFFESSIONAL. In all the composer worked on approx. eight projects that year.

In 1982, the composer scored two movies for director Matt Cimber, A TIME TO DIE and BUTTERFLY, both contained wonderfully atmospheric and lyrical sounding scores, and it was a case of the music being of a far higher quality than the movies it was written for. Also released in 1982 was THE THING.

This turned out to be something of a chequered assignment as in unusual, for Morricone. Director John Carpenter, had provided the music for many of his previous movies himself, Carpenters style being solely electronic or synth based, but this was something that worked in his movies, the filmmaker/composer very rarely developed a theme or had anything that was melodic, his previous scores including, THE FOG, SEASON OF THE WITCH, HALLOWEEN ll and lll, and ESCAPE TO NEW YORK to name but a few.

For several years Carpenter collaborated with Alan Howarth, with Howarth realising the technical side of things whilst Carpenter composed the music. So, when it came to THE THING, I think it was obvious that Carpenter would want a say in how the score was written, placed and the overall sound and style that was deployed. Which is something that Morricone could be rather temperamental about, after all if you employ a composer to write a score, you should trust them, and have faith in what they will deliver. However, Morricone reflected in an interview about the time working on THE THING, he told the interviewer, that Carpenter went to Rome to show the composer the film, but he never gave him any instruction about the music that he thought the film required, and during the scoring process the director altered the cuts of the film, after Morricone had finished writing the score, Carpenter used just one single piece of music in the end, with some of the tracks that were not utilised ending up in Tarantino’s THE HATEFUL EIGHT.

John Carpenter said of Morricone and the score for THE THING.

“He’s just fabulous and just genius. All I said to him was, ‘Fewer notes.’ If you see The Thing, the ultimate theme is the result of our conversation: simple, synth-driven, effective.”

In the same year the composer scored films such as WHITE DOG for director Sam Fuller and The Giuliano Montaldo directed TV series MARCO POLO, which in my opinion contains some of the composers most haunting themes from this period in his career.  He also worked on the ill- fated TREASURE OF THE FOUR CROWNS as well as THE LINK and LE RUFFIAN. 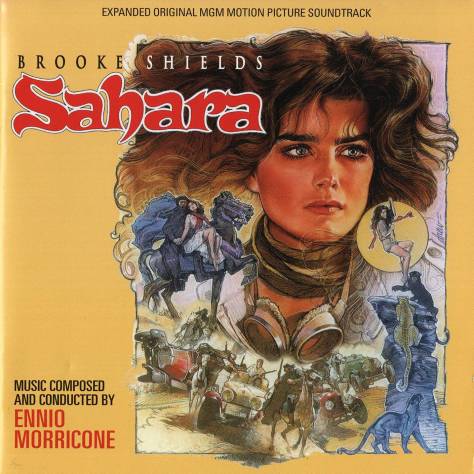 Morricone worked on ten movies in 1983, these included, HUNDRA which was a rather lack lustre sword and sorcery movie directed by Matt Cimber, again the only memorable thing about the film was Morricones score. He also provided scores for THE SCARLET AND THE BLACK, COPKILLER, THE KEY and SAHARA which starred Brooke Shields. 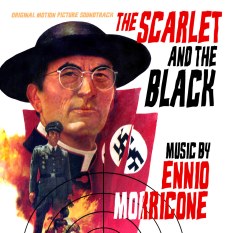 1984 was the year that Morricone was to be re-united with Sergio Leone, for the director’s epic gangster movie ONCE UPON A TIME IN AMERICA.

Morricone’s score for this is considered one of his many masterpieces for cinema, again the chemistry between director and composer is evident, with much of the score for the movie being written before any filming had begun, Morricone’s music was also played on set to inspire the actors in the movie.

And although it was met with a mixed reaction from critics it would soon prove to be an iconic and cult movie when it was restored to its full running time by the director. It is probably because of the composer’s involvement on this movie that he scored just four other projects in this year.

One feature entitled, THIEVES AFTER DARK, a documentary called DON’T KILL GOD and two TV scores which were WHO WAS EDGAR ALLAN POE? And THE FORESTERS SON.  In 1985 the composer slowed his scoring schedule considerably, working on just six projects, IL PENTITO, RED SONJA, LA GABBIA, IL VIZIETTO lll and VIA MALA amongst them.

Four scores followed in 1986, one of these being THE MISSION, a score that he should have won the Oscar and the BAFTA for, but sadly did not, THE MISSION is a fusion of the classic style of Ennio Morricone with ethnic undertones and textures that are further enhanced by a deep religious sound, the end result is stunning and probably one of his most accomplished works and also one of his favourite works for cinema.

Many thought that Morricone had been snubbed by the Academy, like he was twelve years previous on DAYS OF HEAVEN. Filmmaker David Puttnam was visibly surprised at the BAFTA ceremony commenting that he was disappointed that Morricone had not been given the award for the score. Also, in that year the composer collaborated with THE EXORCIST director William Friedkin on C.A.T. SQUAD a TV movie and worked with Mauro Bolognini on THE VENETIAN WOMAN. Films such as RAMPAGE, THE GOLD RIMMED GLASSES, LA PIOVARA 3, MOSCA ADDIO, CONTROL and THE UNTOUCHABLES followed in 1987.

The scene in the station being a masterclass in film scoring. In 1988, there were so many big movies, BEETLEJUICE, COMING TO AMERICA, SCROOGED, RAMBO lll, RAIN MAN and COCKTAIL are just a handful of movies that all weighed in at the box office getting great returns. In this year Morricone scored a movie that became associated with him nearly as much as his western soundtracks, CINEMA PARADISO is a heartrending soundtrack that contains so many poignant and pensive emotions, it is overflowing with rich and fragile sounding melodies, and is for me Morricone’s supreme achievement. 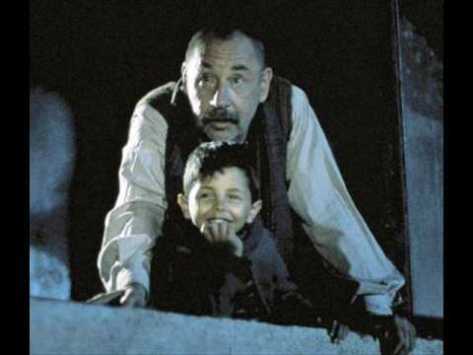 The score laced the images perfectly and created a greater depth of emotion, it transported the watching audience to the projection room, and into the heart of the young boy who was marvelling at the moving images that came from it. It was as if the mu sic was the mind of the boy and was seeing through his eyes the wonders of cinema. It is for me personally Morricone’s most moving and emotive soundtrack. I would prefer to listen to his music for this and also watch the movie over and over rather than sit through some of the aforementioned so-called block busters.

This was a marriage of images and music at its most supreme level, the director telling the story and the composer weaving haunting and affecting musical poems throughout it, underlining, supporting, and ingratiating each and every frame of film. It must also be mentioned that the Love theme from the score was a joint composition with Morricone’s son Andrea collaborating with his Father upon it. The partnership achieved with Morricone and director Tornatore, is an accomplished and special one, in my opinion maybe it climbs to a higher level than the collaboration that Morricone had with Leone, there seems to be more of an emotional connection and also one that brings to fruition affecting melodies that are as one with the scenes unfolding on screen, which is something that we would see in later collaborations between the filmmaker and the composer. Giuseppe Tornatore is considered as being one of the best Italian directors and has had thus far a career that has spanned three decades, he is credited with bringing the spotlight back upon Italian cinema with movies such as CINEMA PARADISO, EVERYBODYS FINE and MALENA all of which were scored by Morricone. This is just my opinion, but I think that Morricone’s music is not only integral and important within the films of Tornatore, but it is also an extension of the films storyline and can also be looked upon as an unseen character within the story as opposed to just being music that embellishes it. 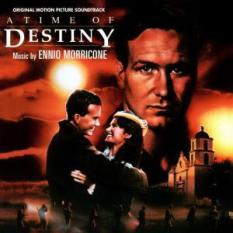 Also, in 1988 Morricone scored A TIME OF DESTINY and worked with director Roman Polanski on FRANTIC as well as writing the wonderfully atmospheric and melodious soundtrack for the TV series SECRET OF THE SAHARA, from which I am certain Hans Zimmer took inspiration from for sections of his score for GLADIATOR. 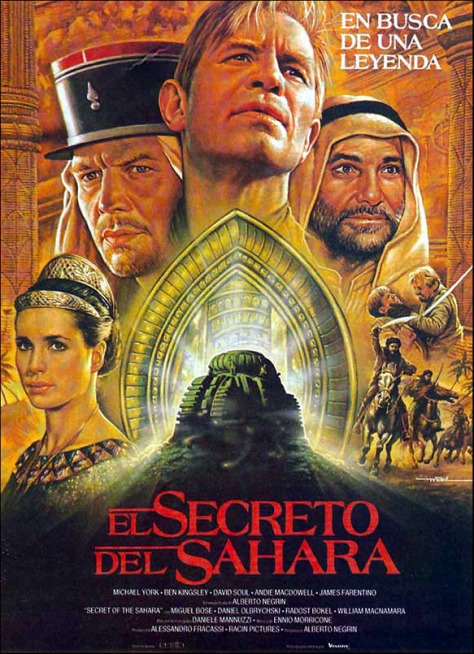 1988 may not have been a year of many assignments for the Maestro, but it was a year of haunting themes and inventive compositions. In 1989, the composer worked on even fewer movies, but again these all contained notable scores, A TIME TO KILL being one of them.

It was also the year that the composer re-united with Roland Joffe for FAT MAN AND LITTLE BOY and worked with Brian De Palma on the totally consuming CASUALTIES OF WAR, the composer also scored three TV projects one of these being ENDLESS GAME  which was directed by veteran British actor and filmmaker Bryan Forbes.

Maybe the 1980.s was a period in film scoring where filmmakers were turning increasingly to the use of songs on soundtracks, but this did not slow that much the creative flow and innovative work of Ennio Morricone, the projects may have lessened compared with previous decades, but the musical excellence and the superbly innovative music thrilled, excited and enthralled all.