Hans Zimmer for me is not as many are saying lately the greatest film music composer in the world, I have to say that I do at times like what he produces but I also have reservations about his music in the originality department as I am sure you will agree one can hear snippets and brief passages of other composers music within his soundtracks. But enough said about this, THE PEACEMAKER was a movie that I must say I did enjoy, and the music that Zimmer produced for the film fitted the action on screen like the proverbial glove, tense and nervous pieces melded with high octane action compositions and all held together with a strong Russian influenced sound that the composer created by way of martial sounding music and also an imposing male voice choir. This is something that Basil Poledouris also utilised before Zimmer invented it in his score for THE HUNT FOR RED OCTOBER in 1990 to great effect. Zimmer for me uses music effectively in movies and his scores certainly underline the action on screen but again I have to say it is the originality I have the problem with. This release of THE PEACEMAKER is an expanded version on two discs; it includes a lot of bonus tracks and also has cues that were previously not issued including Harry Gregson Williams music for the trailer. Presentation is as always wonderful by La La Land records.

Released in 1999, WITH FIRE AND SWORDS is movie that was produced in Poland. It is a sweeping and highly volatile epic story that is filled to the brim with great battles, adventurous undertakings, heroism and romance. A truly riveting tale about the Ukrainian uprising against the Polish-Lithuanian Commonwealth magnates in the 17th Century.

This was the first part of the story and there were other instalments filmed but I think this is probably the most realistic and interesting. The movie was based upon the writings of author Henry Sienkiewicz who’s fictitious historical story was first published as a novel in 1884. WITH FIRE AND SWORDS is the first story of three that is known as the Trilogy in Poland, the second being THE DELUGE which was published in 1886 and the third instalment being entitled FIRE IN THE STEPPE which was originally published as COLONEL WOLODYJOWSKI.

The original novel has been adapted and presented as a movie on many occasions but it was this particular version that seemed to attract the most attention both inside Poland and around the globe. The Trilogy of stories became obligatory reading in Poland at the turn of the 20th Century as it was seen as a vehicle for expressing patriotism within the country when it was deprived of its independence.

The musical score is by composer Krzesimir Debski, who provided the action and romance on screen with a soundtrack that is just as epic and enthralling as the films storyline. The composer’s score is filled with wistful and haunting melodies that interweave and compliment each other through an abundance of action led music and has to it an atmosphere that literally oozes adventure, emotion and drama. Highly recommended.

Highly influenced by the Hammer gothic horrors and subsequent productions from Amicus and the like IL PLENILUNIO DELLA VERGINI (THE DEVILS WEDDING NIGHT or FULL MOON OF THE VIRGINS) is a horror fest laced with nudity and lots of blood letting. The musical score is the work of Bulgarian born composer Vasco Vassil Kojucharov who was particularly busy in Italy during the 1970,s. The composer turned his talents to writing scores for westerns, spy thrillers and also horror flicks as in this case, he at times worked with Nino Rota and as well as film music was engaged in the composition of music for the concert hall which was labelled as being Avante Garde. The soundtrack is a rather odd affair as it is a fusion of styles and sounds that encompass pop orientated pieces that are infectious and upbeat and at times do certainly sound a little like music from a western to sombre and chilling sounding compositions which include inventive and original orchestrations which incorporate choir, solo female voice and electronic support. Released by the ever industrious BEAT records it is I would say an oddity but although obscure is still an interesting work.

Originally released in 2002, SUM OF ALL FEARS is a contemporary film score classic that was penned by the great Jerry Goldsmith,the composer seamlessly fusing symphonic with electronic and as always creating something that is highly entertaining, edgy and exciting. Although an action led score it still remains listenable away from the movie and is a prime example of the work Goldsmith was doing during this period of his career. This edition on La La Land records is an expanded version of the original compact disc release which was on Elektra records and includes a number of cues that were up until now unreleased,it also includes over ten minutes of bonus material and three songs which were utilised within the movie and overall has an extra 30 minutes of music. Nicely presented as always by La La Land records and includes informative notes by Jeff Bond who also give us a track by track description of the score. Even if you already have the original release this is certainly worth adding to your collection. 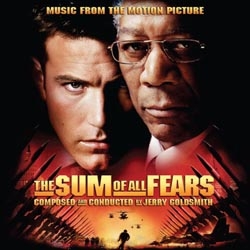