Nominated for Best Original Music Score from Asian Television Awards in 2004 for a TV Drama, The Frontline (2003), Alex Oh has composed music for some of Asia’s most popular and award-winning Films and TV dramas which include Best Film, Rule #1 (2009 Silver Screen Award S.I.F.F), Singapore box-office horror hit , The Maid (2005), Men In White (2007), Gone Shopping (2007), Do Not Disturb (2007), Durian King (2004), Six Weeks (2004) and a winner for most innovative documentary NGCI-EDB Production Fund in a National Geographic Documentary, CyberWars: To Catch A Little Fish (2003).

One your scores BAIT 3D has recently been issued onto compact disc on the movie score media label, were you involved in the preparation of this release or responsible for selecting what music from the score would be on the disc ?

I was not involved in the preparation / selection of the music but whoever did it did a great job! I Love the selection! 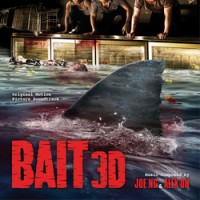 How did you become involved with BAIT 3D?

In 2011, I was based in China, one day I got a call from a friend asking me if I would like to score a shark movie.  I accepted, discussed details and about 2 months later, I was composing the score.

The score for BAIT 3D was collaboration between yourself and another composer. Did you work with the other composer involved or did you both contribute individual cues for the movie?

Yes, I work closely with him to decide which cues we would be doing. Symphonic cues were mine while he did the atmospheric cues.

What musical education did you have ?

My music education began when I was 4, I was classically trained in pianoforte to LTCL and later studied music production in a media school.

Was writing music for film something that you wanted to do early on in your career or did you become involved with film music as your career developed?

It developed as my career and involvement in music progressed. I started out in 2001 wanting to be a music producer, recording and producing bands. After a few years doing this, I was composing for TV commercials and TV dramas. I scored my first film in 2004 and have been doing that ever since.

BAIT 3D sounds like a fully symphonic score, what size orchestra did you utilise for the score and what percentage of the work was performed by electronic elements?

We used a string section of 40 players. The rest were electronic.

How many times do you normally like to see a movie before you start to get some ideas about how much music and what style of music you will write for the project?

Once. I like the initial feeling I get when I watch it. I would remember it and let it play in my mind and from there I will have ideas about what to write, how much music and the genre. In the case of Bait, after watching it, out came the shark theme, love theme and hero theme.

How much time were you given to write the music for BAIT 3D?

I had a generous six weeks to work on the movie.

What composers from any genre of music would you say have either inspired you or had an influence upon you and the way in which you compose for film?

Definitely, John Williams. I remember when I was a kid; I was playing E.T, Superman, Star Wars, Indiana Jones, etc. Most of the influence and inspiration come from him. That’s one of the reasons why I was so excited to do Bait. In recent years, I’m also influenced by other composers like Ennio Morricone, HowardShore, James Newton Howard, Alan Silvestri, Alexander Desplat and Hans Zimmer.

When you begin work on a film score, have you a set routine of writing for example, smaller stabs and passages first or larger cues, or do you begin with a theme and then base the remainder of the score around this?

No, there is no fixed routine for me, however, I do like to begin with a theme, work on a large cue at the end and base the remainder of the score around that. However it really differs between films.

Have you ever been invited to score a film and when you viewed the movie a temp track was installed and did you find it useful or distracting?

The Majority of the time, yes, there’s always a temp track. It is both useful as well as distracting. Useful and necessary as it allows the Director to communicate with the composer if he has certain ideas for the score. Distracting as it does hinder the creativity of the composer. To me the spotting session is very important to discuss what is needed and I would input my ideas as well.

You have worked on both motion pictures and television productions, what would you say were the main differences for you when working on a feature from as opposed to a TV series ?

The Main difference will be themes and arrangements. For television productions, normally there’s one main theme and you create music cues that fit that particular episode. Arrangement doesn’t need to be very full as it’s only play out in the living room in stereo as compared to motion pictures in a theatre hall in surround. A lot of thought goes into the themes and arrangement for motion pictures. Besides the main theme, there are other themes in a motion picture and each has to develop to form this single thread that holds the whole movie together.

Also when working on a TV series do you recycle any music, by this I mean do you re-use music cues from for example episode 1 and adapt it in episode 5 etc etc?

Yes, there are music cues, themes that will be re-used, recycled and adapted in different episodes to keep the consistency. But mostly it will be new music cues.

You have also written music for ads, is it more difficult working on an ad rather than a movie, I ask this because of the time period involved and I suppose you have a limited time to get your music to do its job?

It is more difficult to do a movie than an ad. Time period for ad is only a few days to a week. Writing music for an ad, it’s much like saying something straight to the point. Scoring music for a movie is like taking your time to tell a story, with lots of interesting characters and chapters.

What do you do musically away from film?

Away from film, it would be composing for ads, dramas, and other smaller projects which involve music production, compositions or arrangements.

What are you working on at the moment?

I’m working on a score for a teen dystopian film, FRVL.

Many thanks to the composer for his time. and his patience.