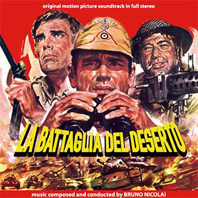 Yet another important and much requested soundtrack release from the now famed Digit movies label . This is the first ever compact disc release for Bruno Nicolai’s powerful soundtrack; the original vinyl release was on the Gemelli label, founded by the composer himself during the 1960’s. Long deleted, this latest version of the score not only includes the original LP cues but also has tracks from the films masters, all of which have been re-mastered to a high standard and sound excellent.

It’s all fairly typical of the style and sound of composer Nicolai, with a driving, forceful, martial-sounding theme featured throughout in various guises and arrangements. Upon closer examination, the central theme does have certain similarities to Morricone’s For a Few Dollars More, albeit with a slower tempo and performed on traditional instruments rather than whistled

However this observation does not in any way detract anything from Nicolai’s work, as it is without doubt one of the Maestro’s most accomplished soundtracks. Performed by full orchestra, it’s compelling and highly listen-able and is more than capable of standing on its own two feet as an entertaining and vibrant collection of themes away from the images that it was intended to enhance.

The score also contains a number of quieter and lighter moments as in track number nine, Nancy, which is a particularly melodic and charming Spanish guitar solo that wouldn’t be out of place on a Spaghetti western soundtrack. Track number seventeen, a jazzy, almost sleazy sounding version of Red Blues, features on the CD twice. Nicolai wrote a number of cues for the score which were utilised as source music, which are completely different from the style of his main score but – surprisingly – don‘t sound at all out of place. So another triumph for Digit Movies, and another great Italian film score saved from obscurity. Highly recommended.