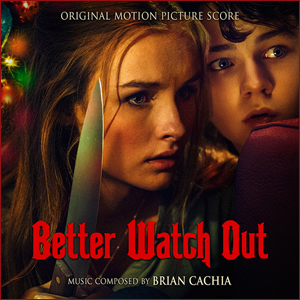 Brian Cachia is one of those composers that you are really not aware of until that is you find one of his scores and realise, he has in fact got a good body of work behind him. BETTER WATCH OUT was the score I was told about and via this work I discovered a few more and made the discovery that Cachia is a very accomplished composer. On listening to BETTER WATCH OUT I have to admit to being impressed by the style and also the orchestrations that the composer utilised, yes it’s a horror movie so one would expect atonal dark and sinewy material, and yes there is some of this, but there are also some well structured and interesting lighter cues and to be fair to the composer even some of the atonal material remains thematic or at least contains some melodious content. In many ways Cachia’s style evoked memories of some of Chris Young’s early scores, or even the work of Daniel Licht.  I do realise that Cachia’s score in this case does have its fair share of electronic instrumentation as in synthesised based material but it sounds to me as if the composer utilises this as a foundation and then builds the score around it, adding conventional instrumentation and layering the electronic content, building textures and awakening musical colours. As I say the sound and style employed did remind me of Chris Young and also had hints of a style that at times was employed by composer Jerry Goldsmith, it is a dark and somewhat brooding work, but given the subject matter I expected nothing else, the composer is inventive within the score, producing sounds and touching on senses that are effective and vibrant. Cachia’s style and overall sound on this score is obviously quite harsh and in places powerfully driving, there is to the work a robust and earthy sound and one that purveys a richly ominous and mischievous aura, the composer employing a dark and dramatic piano at times to give the soundtrack an even great fearsome atmosphere and adding an uneasy persona to the score. Certainly a release I would recommend because of its originality in places and also because its just a great soundtrack.