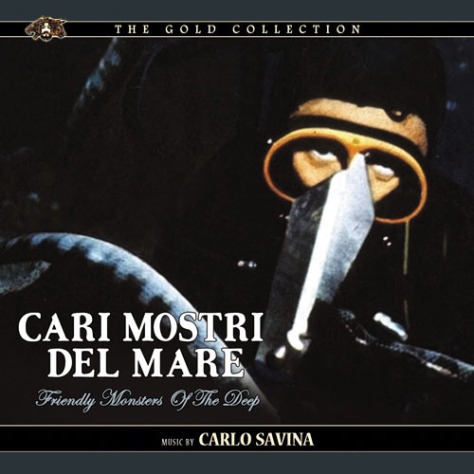 Composer Carlo Savina, was born in Turin, Italy on August 29th, 1919, he became one of the most sought after and busiest composers of film and television music in his native Italy and later became respected and much in demand within the rest of Europe and the United States. As a composer Savina worked on numerous movies and was able to easily adapt his style and creative thoughts to cater for any genre of film, he worked on numerous assignments for the cinema which included, romantic comedies, tales of drama and adventure, westerns and historical period pieces as well as thrillers, horror movies, Police dramas and Roman epics. Because of his unique sound and versatility, the composer was able to bring to each project a lushness and melodic perfection that was his own individual musical fingerprint, and this was a style that not only suited and supported the movies that he worked on, but also was appealing as music that could be listened to away from any of the images it was intended to enhance. Savina, also made a name for himself in the role of conductor and arranger and during his career collaborated with many eminent Maestros who penned soundtracks for motion pictures, his career spanned across both what many collectors and film music buffs refer to as the golden and the silver age of film music, he has acted as musical director to, Philippe Sarde (TESS THE TENANT and THE BEAR), Nino Rota (THE GODFATHER, AMACORD, FELLINI ROMA, THE TAMING OF THE SHREW and numerous others), Manuel De Sica (THE GARDEN OF FINZI CONTINI) and most notably Miklos Rozsa on the epic score for BEN HUR. Savina, collaborated with Dr Rozsa many times, and worked on the composer’s epic soundtracks for Hollywood produced Biblically slanted blockbusters that were filmed at Cinecitta in Rome. During the 1960, s, Savina was given the full credit as composer on the motion picture EL CID, this was purely for prints that were released in Italy because of certain contractual issues that existed at the time. Savina’s contribution to the world of cinema has been vast and consistently very good and it is at times hard to come to terms with just how many movies this Maestro has been involved with. He scored numerous Spaghetti westerns either as composer or musical director between 1969 and through to the mid 1980’swhen the genre finally started to fall from grace with cinema audiences.

One of the westerns that Savina composed for was COMING AT YA (1981) which was a 3D movie and was basically a vehicle for actor Tony Anthony, the composer’s music outshining the storyline, the images and any acting that might have taken place. The score is still revered and respected by many to this day and is held in high esteem by collectors and critics alike. Savina came from a musical background, his Father played first clarinet in the orchestra of EIAR which at the time was the Italian public radio broadcaster.
As a youngster Savina found himself constantly surrounded by music and began to become increasing interested in music composition, which was something that his parents became aware of, so they decided that he should from an early age begin to take lessons on the violin. He went on to study music at the Music Conservatory Giuseppe Verdi in Turin from where he graduated with diplomas in Violin, Composition, Piano and conducting. In 1945 Savina began to write musical compositions that were utilized for radio in plays and also for background music on other programmes and shows. He then formed his own orchestra and became well known and much in demand. In 1950 the composer began to write music for the cinema and for the next thirty years became one of the most prolific composer conductors involved in movie music. I suppose one could say that Carlo Savina was to Nino Rota what Bruno Nicolai was to Ennio Morricone. Savina often arranging and conducting Rota’s scores and at times writing additional cues for him when he had moved onto another assignment and the film’s producers felt the need for an extra section of film to be scored. Savina also worked with Ennio Morricone, Armando Trovaioli, Stanley Myers, Stephen Sondheim and Mario Nascimbene as arranger or musical director. But there is no doubt whatsoever that Carlo Savina possessed a great talent and was a gifted composer in his own right and during his career worked on over 200 film scores. In 1985 he was the recipient of the David Di Donatello Award for best music, which was for his score to PIZZA CONNECTION. He passed away on June 23rd, 2002.

An area in which Savina seemed to excel at was the documentary, nowadays I am sure if he were still alive and working would have been very busy writing the scores for the abundance of documentary films that we see on both TV and in the cinema. One such documentary was, CARI MOSTRI DEL MARE or FRIENDLY MONSTERS FROM THE DEEP as it was known outside of Italy which was released in 1977. Directed by, Oceanographer and filmmaker Bruno Vailati who also wrote the screenplay. Vailati, was born on September 2nd, 1919 in Alexandria, Egypt and had a passion for creating these type of documentary movies he was a fearless and adventurous filmmaker who would dive into treacherous waters and explore unchartered seas to bring us rare footage, he worked on many documentaries all of which have garnered a lot of interest. His work as a film producer and writer ranged from 13 one-hour long undersea documentaries titled “Encyclopedia of the Sea,” (which I suppose one can compare to the work of French filmmaker and explorer Jacques Cousteau) to the Italian sword and sandal epic “HERCULES UNCHAINED,”
After graduating from law school at the University of Bologna, Vailati mounted his first film expedition. He travelled to the Red Sea and produced some of the earliest, and at that time the highest quality underwater film footage ever shot. This footage eventually became “The Blue Continent.” Vailati, became known and highly respected as the years rolled forward for his passion and enthusiasm when it came to marine photography. His films, which were made in the main for Italian production companies and sponsors, as well as his own film company, were then sold onto other TV channels and companies and shown throughout the world on public and private TV stations.
In 1954, his “The Blue Continent” was one of two Italian entries at the Venice Film Festival; the other was Federico Fellini’s “La Strada.” As his career progressed the filmmaker, made documentaries in all the worlds seas, and in Italy his movies often attracted more viewers than the so called popular and successful shows on TV. Away from Marine photography and documentaries he worked on, THE GIANT OF MARATHON, THE GOLDEN ARROW, TORPEDO BAY, the aforementioned HERCULES UNCHAINED and a remake of THE THIEF OF BAGHDAD in the early 1960’s. In 1971, Vailati collaborated with fellow filmmaker David L Wolper for a series entitled MEN OF THE SEA, the six-part series of 1-hour documentaries included an episode ANDREA DORIA MINUS 40, which charted Vailati’s exploration of the wreck of an Italian steamship which sank in 1956.
Vailati, passed away in Rome, on February 26th, 1990 after a long battle with cancer, he was 70.