Released on May 15th 1979, ZULU DAWN, was the prequel to the classic British war movie ZULU which had taken cinema box offices by storm some 15 years earlier. ZULU DAWN tells the story of actual events that took place on January 22nd 1879 at the start of the Anglo-Zulu war when Zulu King Cetawayo,s fearsome and formidable warrior regiments called impi’s attacked part of the British column that was encamped upon the slopes of the mountain of Isandlwana. The British had basically acted illegally and invaded Zulu land on the pre-text that the Zulu’s were about to invade Natal colony, but of course this was not true at all as the Zulu’s were more intent on harvesting their crops at the time to feed their people than crossing the buffalo river into Natal to start a war, so the British more or less forced the Zulu’s into a conflict. But things went horribly wrong for Lord Chelmsford who was in command of the British force he made the mistake of
underestimating his enemy thinking that as they were not a European foe they would be dis-organized and weak and would easily bow to the superior British redcoats with their firepower and supposed military might. Chelmsford split his force leaving 1,500 regulars and 300 native troops at Isandalwana whilst he moved forward to Ulundi where the Zulu’s main encampment or Kraal was situated, the British commander was looking for a quick and decisive victory and an action that would bring to an end the Zulu nation. The Zulu’s who were far from dis-organized and undisciplined seized the opportunity and attacked the British pouring over 20,000 warriors into action, catching the British by surprise and ill prepared on the morning of January 22nd,leaving nearly of all the column including the native troops massacred. Chelmsford had not taken into account the history of the Zulu people and the power of its armies that had been schooled in the art of warfare by a long line of King’s which started with Shaka in 1816. ZULU DAWN was far more historically accurate than its predecessor ZULU, it paid far more attention to the details of the event and the politics that led to it and also looked at the battle through the eyes of both the British and the Zulu’s and also included some stunning cinematography and realistic battle scenes. The only odd bit of casting for me personally was the role of Colonel Durnford who was portrayed by Burt Lancaster it was a performance that I think did not quite gel. The film however contained some wonderful performances by Sir John Mills, Peter O Toole, Simon Ward, Denholm Elliot, and Bob Hoskins to name but a handful and I think was unfairly dismissed by critics of the day, but there again it was up against ZULU which was after all a classic and had become a part of British film making history and of course comparisons would have been made. 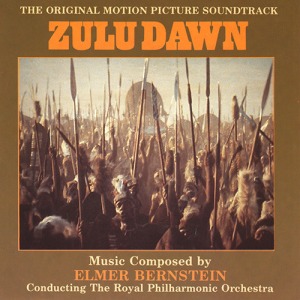 The music for ZULU DAWN was the work of Hollywood stalwart Elmer Bernstein, at the time of the announcement that he would score the movie it came as somewhat of a surprise as many thought that John Barry would be assigned, but Bernstein produced a gloriously patriotic and proud sounding soundtrack that was filled to overflowing with pomp, circumstance and literally brimming with imperialistic fervour. As soon as I saw the movie I began to look for the soundtrack album, which was at the time not available, and it did not appear for a number of years after the movie was originally released, finally Cerebus records in the United States made it available on vinyl and then later a CD was released, the score was also issued as a re-release on LA LA LAND RECORDS and now we are given the wonderful music again by BSX records, which comes complete with some stunning new art work courtesy of Mark banning and interesting liner notes by Randall Larson. There is no doubt at all that Bernstein’s vibrant and epic sounding score is one that will live in collectors minds forever, who after all can forget the RIVER CROSSING scene where the British make the crossing of the buffalo river accompanied by Bernstein’s richly patriotic and inspiring music or the oncoming Zulu imp’s driven forward by the composers pulsating and urgent percussive beats laced with male voices and foreboding brass flourishes as they sweep across the grasslands and drive their enemies back and eventually overpower them or indeed the romantic and also sad strings that accompany the British colours as they fall from the grasp of a Zulu warrior into the fast flowing waters of a river and are carried down stream marking the end of an era in British history. The score as one would expect is built upon a strong martial sounding foundation, Bernstein bringing into play timpani, piccolo trills and military band flourishes to add authenticity to his work, with the string section at times supporting the martial instrumentation along with brass and elevating them into a full blown symphonic piece as in GLORY which verges on something that could be the work of either Walton or Elgar. The Zulu’s are also musically represented the composer utilizing a strong percussive led theme that is a strong footing for ominous sounding brass and baritone voices that accompanies Zulu scouts as they peruse the British from afar and this strong thematic material is also engaged when we see the Zulu on the move towards the British encampment and again the composer underlines the Zulu attack effectively with variations of the same theme, the music ever present but never overbearing, in many ways Bernstein’s musical accompaniment to the Zulu army reminded me vaguely of the style that Max Steiner employed in THEY DIED WITH THEIR BOOTS ON, where as it is heard each and every time the Zulu’s make an appearance or when they are about to, of course the composition is not the same as Steiner’s but the music is used in the same way. The score is most definitely an epic one and is regarded as a classic among collectors of film music and was one of the last opportunities that Bernstein had to employ this type of scoring as film scores were evolving so it is said and not necessarily for the better.