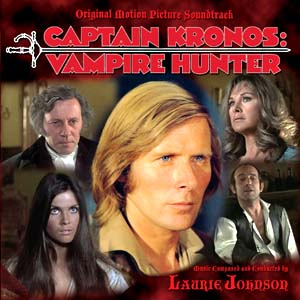 At last Laurie Johnson’s vibrant and powerful music for this classic Hammer horror is available on disc for collectors to savour over and over. The soundtrack release was announced some two years back by GDI records in the UK, but after repeated announcements it never saw the light of day and GDI seemed to vanish without trace. There was even talk that GDI were in fact a bootleg label and had not cleared all the appropriate copyrights for their releases, hopefully this release will put all those rumours to bed as I would hate to see any further projects fall foul of PRS etc because the rights had not been properly secured. There were countless announcements of GDI releasing certain soundtracks in association with other labels such as Silva Screen, Percepto, and even the Italian labels Hexachord and Digitmovies. This production is a collaboration between GDI and BSX records in the States, and is also rumoured to be the first of many such releases, in fact another classic Hammer score (which one we do not know) is being announced as I write this review. I remember seeing KRONOS for the first time and first impressions in my case were not that good, however after seeing the film again about five years ago I now think it is probably one of Hammers better efforts within the area of movies concentrating on vampires. I certainly picked up on the films spaghetti western influences, right from the outset with the hero riding into town and the fight in the tavern etc. This film is without doubt far removed from the style and appearance of Hammers early vampire films starring the ever popular Christopher Lee as the infamous Count Dracula. The score too is a far cry from James Bernard’s familiar Dracula music, even listening to it now it sounds modern and also more fitting, by this I mean that on occasion Bernard’s music was somewhat intrusive and dare I say over the top music, whereas Johnson’s score fully supports and enhances the storyline of the picture and although one is aware that music is playing on the soundtrack it never overpowers it just creates the required atmosphere. In many ways the music that Johnson composed for KRONOS is more akin to the style of the composers long time associate Bernard Herrmann. The use of strings and also the presence of low sombre sounding bassoon on many of the cues is certainly a Herrmann trademark. I am not going to select any particular cue as being outstanding or going to analyze the score track by track or note by note, let us just say it will suffice to comment that this soundtrack is a must have for any Hammer fan and also an essential purchase for collectors of good film music. Packaged well in the same way as GDI used to present their CD releases, with informative and easy to read notes by Randall D. Larson and decorated with various stills etc from the movie. Well worth having.