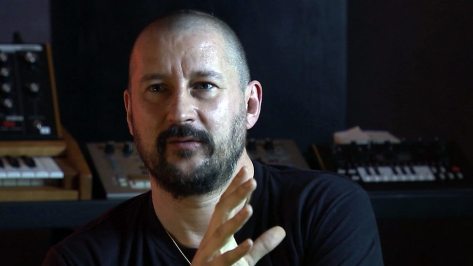 Since the release of his music for the movie REQUIEM FOR A DREAM, Clint Mansell has become a much sought-after composer, performer and arranger. Mansell was born on January 7th, 1963 in Coventry England. His film scores are mostly created via electronic or synthetic means, but Mansell has the unique ability to create beautiful and heartfelt rich themeatic compositions using synthetics which is a rare talent. He first became noticed during the 1980’s when he was a member of the band POP WILL EAT ITSELF, he would take on the role of vocalist and guitarist and had a vital role in the creation of the bands innovative and highly unique sound and style. It was in 1998 when Mansell’s long-time friend Darren Aronofsky asked the musician to write the score for a thriller entitled Pi.

In the end Mansell contributed just three of his own pieces to the movies soundtrack and went onto to select other musical cues to support the movie, but this was enough to place him on the radar of numerous filmmakers all of whom wanted his unique talent to enhance their movies. Two years later Mansell and Aronofsky collaborated once again for REQUIEM FOR A DREAM. Both the film and its highly atmospheric score were a major success. With the composer utilising The Kronos Quartet to purvey his visionary style and sound. This was a landmark score for Mansell, and he became an in-demand commodity after this, working on many movies that were sadly not deserving of his ample talents. In recent years his stand out soundtracks include BLACK SWAN, HIGH RISE, MOON, ABANDON, SAHARA and one of his latest OUT OF THE BLUE.

Composer Clint Mansell has come a long way in the film scoring arena in a relatively short period of time. With each new score and work for the silver screen he has grown and matured musically. One of his latest assignments HIGH RISE is in my opinion certainly one of his most accomplished works, the opening track CRITICAL MASS for example has to it a sound and style that oozes Bernard Herrmann, it put me in mind straight away of NORTH BY NORTH WEST, with its dramatic strings and fervent and forceful sound and pace. The score for HIGH RISE is in a word a delight, it is a score that one will return to many times after the initial listen because it contains so many original and innovative musical notions that the composer has purveyed eloquently and powerfully. Mansell is for me one of this countries (the UK) most talented and versatile composers of film music at this time and I am pleased to see that he is now starting to receive the recognition he so richly deserves as both a composer and a musician. He has the ability to create romantic sounding pieces that take ones breath away because they are just so simple but attractive as in the lilting and fragile sounding THE WORLD BEYOND THE HIGH RISE but then he is so capable of evoking a dark or more threatening persona musically as in CINE CAMERA CINEMA, Mansell is a composer who never ceases to astound me because he does not have his own personal style or sound, because with each assignment he creates a new style a new sound and a new musical fingerprint. In HIGH RISE for example he creates a sound that is more associated with the 1970,s because of his inclusion of a whistler at times which for me emphasizes a loneliness or solitary atmosphere. This is heard more fully in track number 11 THE EVENINGS ENTERTAINMENT. There is also a hint of Barry-esque strings and vibes at certain points within the score which create a tense and threatening mood, but it is the whistling that gives the soundtrack an eerie and edgy feel, in fact I would say that it reminds me of ROSEMARYS BABY in places and also has certain affiliations with both Morricone and Grainer when he scored THE OMEGA MAN. I am also drawn to a type of Americana sound that is present in track number 7 DANGER IN THE STREETS OF THE SKY, which has to it an almost dark version of Copeland going on. HIGH RISE is a score that I recommend you add to your collection, it is a triumph of film scoring. Available from Silva Screen.