George Kallis has in the past few years established himself as a composer of great talent, his music for motion pictures such as, THE BLACK PRINCE, ALBION THE ENCHANTED STALLION, GAGARIN-FIRST IN SPACE and THE LAST WARRIOR have created more than a ripple of interest amongst film music collectors and film producers, it is evident that the composer has an infinite gift for melody and also is able to create sweeping and epic sounding works that not only grace and support each movie he works upon, but also have the ability to stand on their own away from any images that the music was written to enhance and entertain and enthral just as music. His latest assignment CLIFFS OF FREEDOM is no exception, it is a score that contains numerous thematic properties and is at times dramatic and epic sounding, but also has to it a highly emotive and romantic sound that soon establishes itself as the heart and the soul of the work. The composer utilises a large orchestra to purvey all these emotions and senses, the string section and woodwind in-particular working well together to create the romantism and the melancholy. 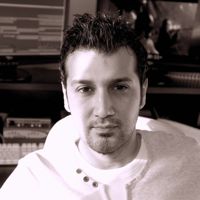 The composer also brings into the equation brass and percussive elements to add a robust and exhilarating sound and style, choir is utilised to great effect at times underlining the instrumental sections and at other points being itself underlined and bolstered by the lush symphonic sounds that are present throughout the score. BATTLE OF VALTETSI is a prime example of effective dramatic writing, with thundering percussion acting as support for fierce sounding brass and commanding choral performances. Also woven into the score are various ethnic sounding performances that bring greater depth and add layers of atmosphere to the already alluring and beguiling soundtrack. CLIFFS OF FREEDOM will be a soundtrack that everyone will want, and one that all film music fans will adore. I love the way in which the composer blends lilting and lush passages and expands and develops these further with subtle addition of ethnic instrumentation, cello also gives the work a deep and richly poignant persona, which can be warm and comforting but also has the ability to be affecting and sorrowful, the music seems to invade the listeners inner self and haunts and tantalises long after one has finished listening to it. The central theme is beautifully written and superbly performed and in my opinion is best heard within the cue CENOTAPH, simply because we get to hear the music develop and grow and are treated to a gracious and wonderous sounding piece that rivals anything by Poledouris, Barry or Morricone when in romantic mode. I cannot recommend this score enough, it is certainly in the running already for next years Award season.

93 DAYS is a 2016 Nigerian produced thriller/drama directed by filmmaker Steve Gukas, the movie tackles the difficult and also heroic events that surrounded the EBOLA epidemic in Nigeria and surrounding areas. The film which is dedicated to the Nigerian born physician Amevo Adadevoh who played a crucial and important part in the eradication of the deadly virus in his homeland and western Africa tells of the horror and heartbreak of the EBOLA virus and how it affects the lives of many and not just the people who have contracted it and their families. The movie stars Bimbo Akintola, Danny Glover and Bimbo Manuel.

“93 days the movie celebrates the act of doing what is right, selfless service and making a difference in the world.” Steve Gukas Director.

The musical score is the work of composer George Kallis who is known for his inventive and haunting music to films such as GAGARIN-FIRST IN SPACE and TV series such as HIGHLANDER, THE SOURCE and HEARTLESS. The score for 93 DAYS is a fusion of both symphonic and synthetic with the symphonic elements definitely having the Lion’s share of the work. Released on the ever industrious MOVIE SCORE MEDIA label 93 DAYS was recorded by a 65-piece orchestra, the style employed by composer Kallis ranges from a celestial almost serene sound to tense and apprehensive atmospheres which underline the drama and desperation of certain situations within the storyline. It also reflects the dedication and selflessness of the team of Doctors that acted quickly and without thought for themselves in a bid to stem the spread of the deadly Ebola virus within the Nigerian Capital Lagos. Kallis utilizes the string section to great effect and bolsters enhances and punctuates this with the use of subdued brass, woodwind, piano and percussive elements. The compact disc opens with SPEECH OF REMEMBERANCE which is the longest cue on the release running for just over six minutes, this is a emotive and somewhat proud piece but at the same time is filled with an air of melancholy, it has an almost opulent and lush aura about it which as the opening piece purveys a sense of hope, in many ways the style and sound we hear is not many miles away from the style of the late James Horner, strings combining with faraway sounding horns and choir at certain points, giving the composition a mood that is lonely but determined. Track number 2, THIS IS MY CITY, is a mix of electronic and symphonic where the composer puts to effective use percussion that acts as a background to layered and melodic strings which themselves are supporting and enhancing a wordless vocal performance by Nigerian born singer Onyi who is now based in The United States, although short lived the cue for me personally is one of the most affecting and memorable cues within the score as it seems to set the scene for all of what is to follow.
Track number 4, INTERNATIONAL REPORTS is a more intense and taught sounding piece, with strings again being the mainstay of the proceedings, acting as both background and central instrumentation to percussion, brass, woodwind and female voice. Track number 6, THE DISEASE IS SPREADING is a particularly poignant and haunting track, with female voice being underlined by emotive sounding strings and further embellished by subtle brass, percussion again is brought into the equation adding weight to both strings and brass elements, which continue to give support to the vocal performance. Track number 16, THE VALLEY OF THE SHADOW OF DEATH, for me is one of the score’s highlights is effectively a combination of the scores central or core thematic material, performed by the string section with light touches from piano and woods that introduce choir which although is just a fleeting appearance is wonderfully atmospheric. The final cue EVELYN is a beautiful and mesmerizing piece, with strings and choral elements being given a more emotive and affecting aura by the use of piano and finally by percussion which acts as an introduction and a background to a short but stunning. This is a score that should be savoured by any discerning soundtrack enthusiast.

George Kallis first came to my notice when he wrote the music for HIGHLANDER the source, I thought then that this composer certainly must have a bright future, his latest score is for something that is slightly more high profile than HIGHLANDER, GAGARIN-FIRST IN SPACE is a 10 million dollar movie telling of the real life events behind the first manned space flight and the man who flew in space Yuri Gagarin. The score by composer George Kallis is an impressive and wonderfully lyrical work that has been written for large symphonic orchestra, choir and also has electronic elements within its framework that support and embellish the conventional instrumentation without being intrusive or overpowering in any way. What we are hearing with this score is a step back in time to the days of what I call wholesome and rich sounding themes, music that is highly melodic and lush with a sound that is not only dramatic and poignant but also posses an eloquent and imposing quality. The composer has created a driving work that has to it many facets and musical levels, all of which entertain and at times mesmerize the listener. It is a score that actually contains themes and real tunes that have a quality to them that remind me in so many ways of the style of soundtracks that were penned some three decades ago. Many of the compositions within the score are hauntingly beautiful, but there are also a number of more dramatic and hard hitting moments within the work both of which combine to create a score that will remain with the listener long after the compact disc has finished playing. The instrumentation or orchestration for me at least evokes memories of soundtracks from the mid to late 1960,s through to the 1970,s and 80,s by composers such as Barry and Goldsmith plus there is a sound and style present that could be Basil Poledouris or even James Horner, this being especially evident with some of the luxurious string passages and chorale work on the score, in fact the composers music for this movie reminded me in many ways of CONAN The Barbarian on more than one occasion. Booming and rumbling percussive elements act as a background to lush and strident strings with flyaway woods and brass punctuation all of which act as a support to an imposing sounding choir. These elements and style of scoring is more prominent in track number five, THE LAUNCH OF THE VOSTOK, this is an exhilarating cue, anthem like in places with driving strings and percussion building to a crescendo that is completed by choir, then mid way through the cue the mood alters and we find ourselves being treated to a highly emotional almost heavenly sounding interlude performed by both choir and strings, this soon reverts to a more dramatic sounding piece with brass enhancing the string section and again being supported by percussion which brings the cue to a conclusion.

Then there is track number six, THE EARTH FROM ABOVE, which is definitely a piece that is filled to the brim with emotive qualities. I love the way in which the composer utilizes horns combined with strings and percussion, it is a sound that does have connections with old school film scoring but it is also a sound that  posses innovative and original qualities. Overall GAGARIN is a score that I know will please film music enthusiast old and new, don’t miss this one, just go buy it…