The composers GREAT GARBO as they are known collectively are Diego, Nora and Lionel Baldenweg. These talented composers and musicians have over the past year or so caused something of a stir in the film music community and have sent many collectors and fans into raptures with their highly original sounding film and television scores. One of their recent projects was for Australian TV channel ABC and Netflix, when they scored the series THE UNLISTED. To say that this is a riveting and highly atmospheric soundtrack is certainly an understatement. With each assignment they seem to become more inventive and stronger in their compositions and arrangements. The score has to it a brooding and dark persona, but still remains thematic. The composers utilise Pink Floyds ANOTHER BRICK IN THE WALL to great effect, when I say they utilise the song, its not in its original form as performed by Floyd. No they have arranged it into a highly compelling listening experience, which although familiar becomes kind of alien as in a song I have never heard before, simply because of the way in which it has been orchestrated and arranged, plus the performance to is stunning, with the vocalist Nora Baldenweg creating an otherworldly performance that is both alluring but sinister.(song is available on a single).

The score itself too is something of a sinister and apprehensive listening experience, with the composers utilising both synthetic and symphonic elements to fashion a work that is rich in tantalising and vibrant material. The opening track on the recording THE MAIN THEME is a fusion of electronic and conventional with a beautiful and melancholy cello performance taking centre stage amongst a tense atmospheric background, it is very much a case of bittersweet as the cello weaves a beautiful and emotive theme whilst the support is rather sinister and certainly apprehensive although melodic in a disconcerting way. Track number two, THE ELITE is a more upbeat performance, which after a short introduction that is slightly edgy and does not give anything away as to what direction this will be going, percussion is brought into the equation, creating an upbeat and driving piece, which is punctuated by voice effects and a not unpleasant theme which although still remains slightly tense has to it plenty of appeal. Track number three, DROPS is too an up tempo piece, which builds and builds creating even more of a tense and nervous mood. Track four REBELLION is a more driving composition, swirling music acts a background to both female voice and angry sounding brass that is again supported via electronics to fashion more tense and dark atmospheres. Overall it is a great listen, it is relentless in its creation of dark musical personas and also purveys many entertaining and interesting themes. Another one to add to your collection, available on digital platforms.

It always amazes me, no annoys me a little too, when a great score is not made available on compact disc, but is available on I tunes or Spotify, why? Well not sure but its annoying, so its about time this practise stopped. I know many of us like digital platforms but is it not better to have a CD hold it and look at it and any notes that might be inside whilst listening to it, Yes exactly. Well I am pleased to let you all know that a score that was only available digitally is now finally out on compact disc. THE LITTLE WITCH, is a fantastic movie and it contains a wonderfully rich and thematic score by composers, Diego, Nora and Lionel Baldenweg. Or GREAT GARBO as we know them. These composers I think are so talented and innovative, their joint scoring efforts on ZWINGLI earlier this year caused more than just a ripple of interest within the soundtrack collecting community, and their reputation for being highly original and super creative and gifted has also spread amongst collectors and critics alike. THE LITTLE WITCH is a fully symphonic score and is filled with a magical and a mysterious musical air. Its one of those soundtracks that one will sit and listen to and not realise it has come to an end, simply because it is so overflowing with eloquent, excellent and quirky themes, there is a mischievous persona to this work, which I think is part of its attraction and the composers seamlessly fuse dramatic, romantic, and at times offbeat and sinister sounding compositions together to create a score that is entertaining, charming and adorable. 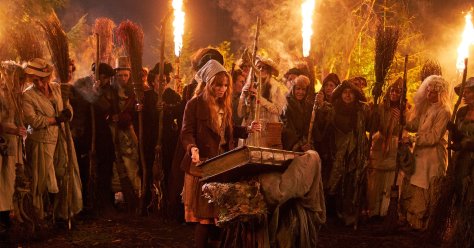 The movie which is a Swiss/German co-production is about a young witch (Karoline Herfurth) who is kind and caring and decides that she must learn all there is to know about magic to be accepted by the wicked witches within the community. Directed by Mike Schaerer, this is a movie that is for kids of all ages, and I suspect that a few big kids will probably enjoy more than the little ones. In some ways there was a look of THE NEVER ENDNG STORY to this movie, the effects being good but not totally Hollywood, which is not a negative whatsoever. The score aids the production greatly, with the composers fashioning highly expressive and supportive music that purveys a plethora of emotions and creates so many atmospheric moments and elevates the story to new heights. It also contains vocals which at times are wordless which are fun filled and at times up-tempo and vibrantly entertaining as well as a Big Band sounding cue THE WITCH EXAM.

I am so pleased that this is finally available on CD, released on RAMBLING (Japan). RBCP-3343. So, have you ordered it, no? heres the link…. 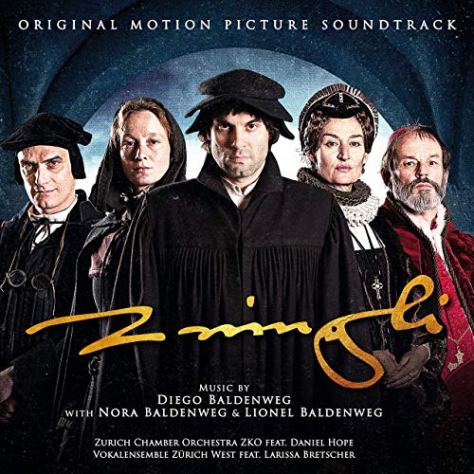 New for 2019 is the film ZWINGLI which is a movie directed by Stefan Haupt that tells the life story of Church reformer Ulrich Zwingli. Who in the 14th Century preached ideas on the reform of the Catholic Church, he was also one of the main critics of the Swiss mercenary system, he studied at the Universities of Basel and Vienna the former being a centre of Renaissance Humanism. He became the Pastor of Glarus and in later years continued in this role at Einsiedein and whilst holding this position continued his studies and became influenced by the writings of the Dutch Christian Humanist, Desiderius Erasmus Roterodamus. In the late1500’s Zwingli became the Pastor of Grossmunster in Zurich and it there he began to preach his ideas on reform more, denouncing the practise of fasting at Lent .

The movie tells his at times turbulent and interesting life story in detail. The musical score is by a trio of composers who are from the same family. Diego, Nora and Lionel Baldenweg go under the name of GREAT GARBO, which is a music production company that was established in 2004. Diego, Nora, and Lionel are an award-winning composer team that have written and produced scores for numerous movies and television productions. The Australian/Swiss siblings have also worked extensively on over 300 advertisements worldwide which include music for Master-card, Sony and Carlsberg. Their better known film credits include THE LITTLE WITCH, and HEAD FULL OF HONEY. They have also collaborated with acclaimed orchestras and renowned musical artists. The music that they have penned for ZWINGLI is filled with rich and vibrant compositions, these include, choral passages and the use of solo female voice that at times are supported by symphonic instrumentation but for the most part are performed accapella with stunning and mesmerising effect. The orchestration for the score is thoughtfully done and the delicate and at times fragile sounding solo violin performances purvey a melancholy yet imposing atmosphere that transfixes and haunts the listener. The score is a fusion of the dramatic, the dark the passionate and the romantic, it enthrals and entertains away from the movie and is ever more engrossing as it progresses and develops, there is a serene and mystical persona present throughout but it is the composers effective use of the string section that stands out and shines with solo voice being added on occasion to create an even more appealing and attractive sound. I suppose the best way for you to make up your own mind about the music for ZWINGLI is to go buy it, all I will say is if you do add this to your collection you will not regret it, the richness and the tantalising themes will delight, enthral and enchant you, and too will make you want to search for more by this composing trio. Highly recommended….