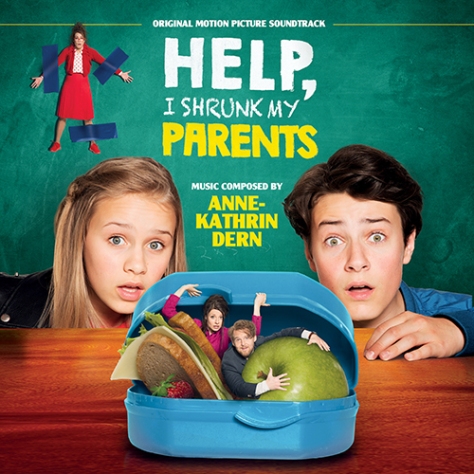 Two scores by the same composer released in not only the same month and week but also on the same day. Movie Score Media are always it seems striving to, introduce fresh talent to collectors of movie music and this week they have exceeded and surpassed themselves with the release of THE LEGEND OF THE WAR HORSE and now HELP, I SHRUNK MY PARENTS. Both scores are the work of Anne-Kathrin Dern the former title being a collaboration of creative talent with composer Daniel James. HELP,I SHRUNK MY PARENTS is in many ways a million miles away from THE LEGEND OF THE WAR HORSE, but saying this maybe it is not that far away, the score is a rich symphonic work, that has to it a mystical and somewhat mysterious air. The composer utilising to great effect the string and percussion sections of the orchestra and also adding wonderfully haunting nuances that are purveyed via, woodwind and the use of a haunting choir, which at times one could easily be forgiven for thinking that it was Dann Elfman who was scoring the movie. It has an EDWARD SCISSORHANDS aura to it, almost ghostlike but at the same time undeniably childlike with a beautiful and mesmerising fragility. THE CURSE OF THE MUSEUM is the opening cue on the release, with the composer almost immediately establishing a playful yet apprehensive atmosphere by using choir, strings and woods that are supported by brass and percussive elements. The string section does work overtime within this opening statement, which sets the musical foundation for the remainder of the score, strings are used to purvey, drama and a playful mood, plus they are also utilised as a driving and rich background on which the core theme is built and formed. This is a soundtrack that is such great fun and has an enormous entertainment value, it keeps one transfixed throughout, with its mischievous and impish cheekiness, pizzicato strings at times punctuating the proceedings and adding a lighter air as the work progresses. There are so many musical moods, colours and textures present that it is at times hard to comprehend that all the music comes from just one movie. The composers use of brass which she combines with percussion to create mini crescendos throughout the work is breath taking. It is as if within each track there is a new motif a new theme or a different style that emerges, thus keeping this fresh and vibrant all the way through. As I say it contains, drama, magic, mystery, hints of the elusive and romantic and has to it a real feel good sound and style.

In many ways and I hope that the composer does not mind me saying that it reminded me of the work of the late James Horner, when he scored pictures such as CASPER and AN AMERICAN TAIL, it has that sound, it is warm and homely, which I know many will say is syrupy and predictable, but I say it is polished, excellent and stunning. The darker cues within the score are also outstanding, the composer again making effective use of strings, to weave a tense sound and establishing an uneasy atmosphere. The track THE ENCHANTMENT is particularly creative and alluring. And in the track THE PLAN the composer displays her ample talents for fashioning action music that hits the spot. This is one for your collection, Highly, recommended, No CD as yet, but we live in hope that maybe in the New Year it will be available, for now it is on various digital platforms.