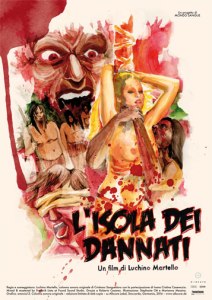 The world of Italian film music is a varied one and when one thinks about it is probably Italian composers more often than not that have been involved in creating innovative sounds and styles to accompany the moving image. It was after all the Italians who not only re-invented the western score but also ended up creating a whole new genre of music for what was an established type of movie. It was also the Italians who developed a sound and style that we still to this day associate with the GIALLO genre of films and when it came to Horror flicks well the Italians are as we know now past masters at underlining shocking and gory moments in celluloid. One particular type of horror film was the collection that dealt with cannibals, i.e. CANNIBAL HOLOCAUST etc. Many of these movies had scores that seemed to subtle, gentle and melodic for the horrors that were unfolding on screen and were sometimes certainly too serene and sweet to accompany the gruesome and at times graphic bloodletting that was the norm for these movies. One such movie which maybe many have forgotten was I’ISOLA DEI DANNATI or ISLAND OF THE DAMNED. Hailed as an unfinished masterpiece the movie from 1978 was directed by Luchino Martello, the film told the story of a Doctor and his wife who along with a young intern become stranded on a remote and what they think is an uninhabited island. After a while the intern begins to have an affair with the Doctor’s wife Laura, shortly after this it soon becomes apparent that they are not alone, the other inhabitants of the island having a taste and desire for human flesh. But hang on let me start again, that’s what the plot would be if it were in fact a movie “WHAT”? I hear you say, but you just said, yes I know I did, ok l will come clean, L’ISOLA DEI DANNATI is a fictitious movie, Luchino Martello yes he is a fictitious character also but one with a great name don’t you agree, what we have here is a tribute or an homage to the wonderful music styles that came out of Italy during the 1970, s for films of the erotic and Carnivore variety which had music created by composers such as Morricone, Ortolani, Cipriani, Fidenco, Ferrio and their like. I have to say that this had me fooled for a while simply because the music by MONDO SANGUE (Cristiano Sangueduro and Cristina Casereccia) is simply superbly retro and filled with what one would think is the sounds of the 1970’s, the attention to detail with the style, orchestration and performance of the score (if that’s what it is) is faultless. Wordless female vocals, grunting and puffing chorale sections, happy sounding la LA’s, beautiful tone poems created on light woodwinds that are enhanced by the use of harpsichord that seem to float on tranquil winds that frequent the imaginary island and also there is that definite ITALIAN SOUND present, a sound that we have not heard since the late 1970, s that came from movies such as EMMANUELE, THE STORY OF O, and the aforementioned Cannibal horrors and others.

This album which is an actual vinyl release is a must have purchase from the excellent catalogue of ALL SCORE MEDIA and if you have not got a turntable, well go and buy one right now because to miss out on this exquisite release would be tragic ( it is also on Spotify) but I highly recommend the vinyl experience. Let’s put it this way if you like, FIDENCO, MORRICONE, FERRIO, NICOLAI, TROVAIOLI etc then you will love this. Fantastic cover art makes this unmissable in any record browser, listen to LA CACCIA DI COCCO, this is Italian film music from the 1970’s at its best (if you know what I mean), just think WHEN WOMEN HAD TAILS fused with THE INSATIABLES add a little light BLACK EMMANUELE and mix in some MONDO CANE or VAMPYROS LESBOS and that’s the vibe that is created here, there is also the sounds of lapping waves and screeching birds in a number of the cues that are underlined and enhanced by the utilisation of strings and organ which adds greatly to the ambience and the atmosphere of this work, even in the final cue LA FINE (KING OF THE CANNIBALS) there is a definite reference to one of Morricone’s early scores FOUR FLYS OF GREY VELVET, I love it, go buy it now.