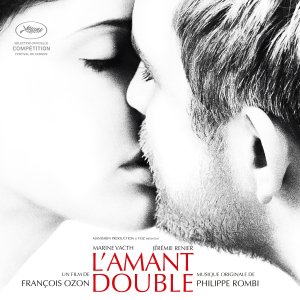 Composer PhilipPe Rombi is one of my own favourites ever since I heard his score for THE SWIMMING POOL I was hooked as they say. His latest score is somewhat different from the Rombi we have all come to be used to. L’AMANT DOUBLE, is a thriller with a few twists, it deals with a woman who falls in love with her psychoanalyst, and after thinking she knows him moves in with him, but things are not as she expects and she begins to uncover a side of his identity that she does not know about. The score is very dark, very atonal for Rombi, it also has a fair number of electronic instrumentation, and for me it is more like sound design as opposed to being a music score, by this I mean there are very few themes or thematic properties, this is a jumpy and unpredictable work, which serves the movie but unfortunately will probably not be one that graces the CD player that often, some of the cues being frantic and somewhat grating. I suppose it’s back to the well it is movie music so if it serves the movie it is good, and its doing what it is supposed to. Rombi does keep up the pressure with this score, it is a highly atonal work, with maybe the exception of two actual themes, which appear at the end of the recording, MATERNITE and LA JUMELLE can be described as melodious, in fact I would probably not call them that even as they start off pleasant enough but then really do not progress develop or go anywhere. This work, although serving the movie will I guess be a disappointment to Rombi fans who are used to haunting and delicious sounding tone poems that are draped in romanticism and drenched in melancholy, as in his score from only last year, FRANTZ. If you want that then please don’t even go here.